By the 1930s, there were five Ukrainian parishes dotting Chicago's neighborhoods, reflecting a wave of immigration of Ukrainian Catholics. Some churches are built in the Byzantine-Slavonic style of St. Nicholas Cathedral. Built between November 1913 and January 1915, St. Nicholas is in the heart of the Ukrainian neighborhood south of Wicker Park and along Chicago Avenue, referred to by locals as Ukrainian Village.

This neighborhood, northwest of the Loop, was first settled by Polish and Slovak immigrants. With the rise of Ukrainian nationalism and the influx of political refugees during World War I, new immigrants gave it a Ukrainian cultural identity, which it retains.

Ukrainian Village, like neighboring East Village, began as farmland. Originally, German Americans, who came mostly as immigrants in the mid-19th century, formed the largest ethnic group in the vicinity. With new waves of immigration starting in the late 19th century, by the turn of the century, the neighborhood was largely Slavic. Similar to Chicago's Lithuanian Downtown in Bridgeport, Ukrainians settled in the district because of their familiarity with Poles who lived in the surrounding Polish Downtown. Dense settlement of the neighborhood was largely spurred by the 1895 construction of an elevated train line along Paulina Ave (1700 W), which provided access to workplaces. It was decommissioned in 1964.[2] 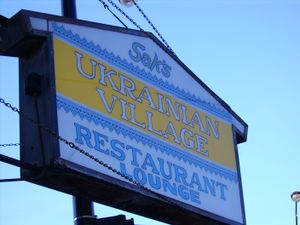 A restaurant in Ukrainian Village with the colors of the Ukrainian flag.

The Ukrainian community in the Chicago metropolitan area is not localized, but there was a concentration immigrants and their descendants in what is now known as Ukrainian Village. This central area has been the focus of Ukrainian life since around the start of the 20th century. It continues to function as its hub, as it has three major Ukrainian churches, Ukrainian-owned banks,[3] a Ukrainian-language grammar school, the Ukrainian National Museum, a Ukrainian Cultural Center, the Ukrainian Institute of Modern Art, two Ukrainian youth organizations, and many Ukrainian-owned restaurants, stores and businesses.

Over the past half century, Ukrainian Village has remained a middle-class neighborhood, populated largely by older citizens of Eastern European ethnicity. It is bordered (and affected) on many sides by areas suffering more poverty and crime. It was insulated somewhat from surrounding socioeconomic change in the large industrial areas on its south and west borders by the strong fabric of ethnic institutions as well as the staying power of the Orthodox and Ukrainian Catholic congregations. As noted above, there are also significant ethnic cultural institutions in the area.[4] Although Ukrainian Village continues to be the center of Chicago's large Ukrainian community, the gentrification of West Town, Chicago community area is rapidly changing the demographic. Ukrainian Village continues to be home to approximately 15,000 ethnic Ukrainians.

Ukrainian immigration to the United States

There have been four mass immigrations from Ukraine to the United States. The first immigrants arrived during the period 1870-1914. Most of these early immigrants from Ukraine were poor, illiterate peasants seeking work and a better life in America. Many small Ukrainian enclaves developed throughout Chicago, including the area bounded by Division, Racine, Orleans and Roosevelt; another in the Burnside area, and another in what has become known as the Ukrainian Village. A small pocket of immigrants colonized Packingtown on the South Side of Chicago. In 1903 they erected a church that stood in the shadows of the large slaughterhouses that employed thousands of men. The First Greek Catholic Church of St. Mary’s of Chicago featured a characteristic three-barred cross on the steeple. Beneath the cross was a crescent, symbolic of the victory of Christianity over Islam. St. Mary’s soon became an integral part of Rusyn culture.

The second, interwar wave of immigration occurred between 1920-1939, following Ukraine’s declaration at the end of World War I as an independent nation. Ukrainians arriving in Chicago at this time were semi-skilled, literate workers who had decided to come to the United States to escape the political and economic pressures of the newly independent Ukraine. Ukrainians played an important role in Chicago’s Century of Progress in 1933. The Ukrainian Pavilion at the Exposition housed a restaurant and exhibit halls demonstrating folk art and history. [5] By the 1930s, five Ukrainian parishes dotted Chicago’s neighborhoods. St. Nicholas Cathedral was built in the Byzantine-Slavonic style. Built between November 1913 and January 1915, St. Nicholas is in the heart of the Ukrainian neighborhood south of Wicker Park and along Chicago Avenue, referred to as the Ukrainian Village. This neighborhood, northwest of the Loop, was first settled by Polish and Slovak immigrants, but with the rise of Ukrainian nationalism and the influx of political refugees during World War I, new residents gave it a Ukrainian cultural identity.

The third, post-World War II wave of immigration occurred between approximately 1948-1955. This wave of immigration brought with it a highly skilled, professional Ukrainian population who entered the United States following the passage of the Displaced Persons Act of 1948. Forced to leave Ukraine to escape Soviet forces, they were committed to Ukraine’s freedom crusade. Following WWII, thousands of political refugees from war-torn Eastern Europe found their way to the United States, including professionals, physicians, lawyers, writers and intellectuals who had opposed the Stalinist regime. The population surge of the 1950s energized Chicago’s Ukrainian Village, and spurred construction of new parishes and the founding of new civic and cultural organizations.

The fourth, and most recent, wave of immigration from Ukraine to the United States occurred in the 1990s, following the dissolution of the Soviet Union and subsequent opening of Ukraine’s borders to the west. While the largest influx of Ukrainians to Chicago occurred shortly after 1990, immigration to Chicago from Ukraine continues to the present time. These new arrivals have made their mark on Chicago as well. Many Ukrainian shops were founded along Chicago and Western Avenue over the years. Most prominent among the shops today are those established by the “fourth wave,” whose members have proven to be quite entrepreneurial. Ukrainian-owned businesses can often be identified by the posters they display advertising various Ukrainian cultural events.

There are several churches within Ukrainian Village, with three located on one street,and most being within a block of each other. St. Nicholas Ukrainian Catholic Cathedral was the first of the two Ukrainian Greek Catholic churches in the village. Ss. Volodymyr and Olha Ukrainian Catholic Church formed in the 1970s after St. Nicholas' parish split in disagreement. St. Volodymyr Ukrainian Orthodox Cathedral represents the Eastern European Ukrainian Orthodox Church and primarily serves the fourth wave of Ukrainian immigrants from the 1990s. Holy Trinity Russian Orthodox Cathedral was the first Eastern European Russian Orthodox church to be built in what was then called the "Slavic Village." It was commissioned by St. John Kochurov and designed by famed architect Louis Sullivan. 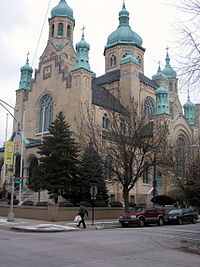 Chicago's Ukrainian history begins on the north side with the arrival of immigrants from western and Carpathian Ukraine in the late 1890s. At the time, they called themselves Rusyns (Ruthenians), an anachronistic national appellation associated with Ukraine’s role within the Austro-Hungarian empire.

St. Nicholas was the home of the famed Lysenko Chorus, which won first place in a 1930 multi-state choral contest sponsored by the Chicago Tribune. 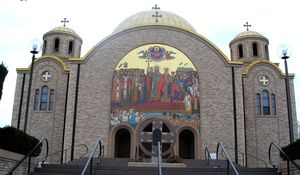 Sts. Volodymyr and Olha Ukrainian Catholic Parish in Chicago was founded in 1968 by Patriarch Josyf Slipyj and the bishop of the Eparchy of Chicago, Yaroslav Gabro. They and congregation members wanted to preserve and nurture the traditions of the Ukrainian Church. This church adheres to the Julian Calendar, a traditional liturgy, and a unique spiritual heritage. 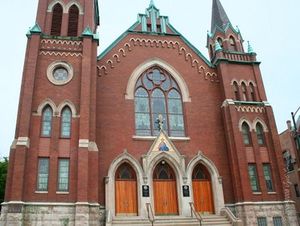 The church was originally built for a German parish. It was sold twice before it was finally bought and converted by the current Ukrainian parish. The parish runs a Saturday school of Ukrainian language for students from preschool to 10th grade.

On December 4, 2002, the Ukrainian Village District, centering on Haddon Avenue, Thomas Street, and Cortez Street between Damen and Leavitt Avenues, including portions of Damen, Hoyne and Leavitt Avenues, was designated as a Chicago Landmark District.[6] Extensions to the district were designated in 2005 and on April 11, 2007.[7]