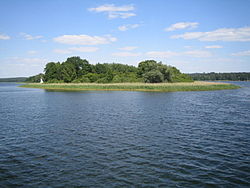 Burgwallinsel, a former Ukrani burgh on an isle in Lake Oberuckersee
Not to be confused with Ukrainians.

In 954, Margrave Gero of the Saxon Eastern March (the marca Geronis), aided by Holy Roman Emperor Otto I's son-in-law, Conrad of Lorraine, launched a successful campaign to subdue the Ukrani, who had come in reach of the Holy Roman Empire's Northern March after the 929 Battle of Lenzen. After the 983 revolt of the Obodrites and Lutici, the area became independent again, yet remained under permanent military pressure, especially from Poland and the Holy Roman Empire.