From Infogalactic: the planetary knowledge core
Jump to: navigation, search
For other uses, see Ulm (disambiguation).

listen)) is a city in the federal German state of Baden-Württemberg, situated on the River Danube. The city, whose population is estimated at almost 120,000 (2015), forms an urban district of its own (German: Stadtkreis) and is the administrative seat of the Alb-Donau district. Ulm, founded around 850, is rich in history and traditions as a former Free Imperial City (German: freie Reichsstadt). Today, it is an economic centre due to its varied industries, and it is the seat of the University of Ulm. Internationally, Ulm is primarily known for having the church with the tallest steeple in the world (161.53 m or 529.95 feet), the Gothic minster (Ulm Minster, German: Ulmer Münster) and as the birthplace of Albert Einstein. 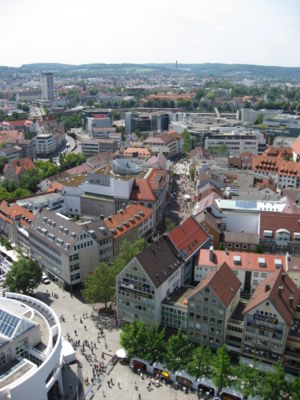 View from the Münster towards Hirschstraße.

Ulm lies at the point where the rivers Blau and Iller join the Danube, at an altitude of 479 m (1,571.52 ft) above sea level. Most parts of the city, including the old town, are situated on the left bank of the Danube; only the districts of Wiblingen, Gögglingen, Donaustetten and Unterweiler lie on the right bank. Across from the old town, on the other side of the river, lies the twin city of Neu-Ulm in the state of Bavaria, smaller than Ulm and until 1810 a part of it (population ~50,000).

Except for the Danube in the south, the city is surrounded by forests and hills which rise to altitudes of over 620 metres (2,034.12 feet), some of them part of the Swabian Alb. South of the Danube, plains and hills finally end in the northern edge of the Alps, which are approximately 100 kilometres (62 miles) from Ulm and are visible from the city on clear days.

The city of Ulm is situated in the northern part of the North Alpine Foreland basin, where the basin reaches the Swabian Alb. The Turritellenplatte of Ermingen ("Erminger Turritellenplatte") is a famous palaeontological site of Burdigalian age.

Ulm in 1572 by Frans Hogenberg

The oldest traceable settlement of the Ulm area began in the early Neolithic period, around 5000 BC. Settlements of this time have been identified at the villages of Eggingen and Lehr, today districts of the city. In the city area of Ulm proper, the oldest find dates from the late Neolithic period. The earliest written mention of Ulm is dated 22 July 854 AD, when King Louis the German signed a document in the King's palace of "Hulma" in the Duchy of Swabia.[2] The city was declared an Imperial City (German: Reichsstadt) by Friedrich Barbarossa in 1181.

At first, Ulm's significance was due to the privilege of a Königspfalz, a place of accommodation for the medieval German kings and emperors on their frequent travels. Later, Ulm became a city of traders and craftsmen. One of the most important legal documents of the city, an agreement between the Ulm patricians and the trade guilds (German: Großer Schwörbrief), dates from 1397. This document, considered an early city constitution, and the beginning of the construction of an enormous church (Ulm Minster, 1377), financed by the inhabitants of Ulm themselves rather than by the church, demonstrate the assertiveness of Ulm's mediaeval citizens. Ulm blossomed during the 15th and 16th centuries, mostly due to the export of high-quality textiles. The city was situated at the crossroads of important trade routes extending to Italy. These centuries, during which many important buildings were erected, also represented the zenith of art in Ulm, especially for painters and sculptors like Hans Multscher and Jörg Syrlin the Elder. During the Reformation, Ulm became Protestant (1530). With the establishment of new trade routes following the discovery of the New World (16th century) and the outbreak and consequences of the Thirty Years' War (1618–48), the city began to decline gradually. Around 1700, it was alternately invaded several times by French and Bavarian soldiers. 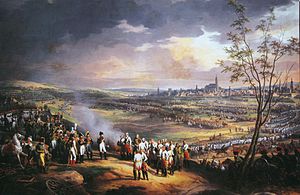 The capitulation of Ulm. General Mack and 23,000 Austrian troops surrendered to Napoleon.

In the wars following the French Revolution, the city was alternately occupied by French and Austrian forces, with the former ones destroying the city fortifications. In 1803, it lost the status of Imperial City and was absorbed into Bavaria. During the campaign of 1805, Napoleon managed to trap the invading Austrian army of General Mack and forced it to surrender in the Battle of Ulm. In 1810, Ulm was incorporated into the Kingdom of Württemberg and lost its districts on the other bank of the Danube, which came to be known as Neu-Ulm (New Ulm).

In the mid-19th century, the city was designated a fortress of the German Confederation with huge military construction works directed primarily against the threat of a French invasion. The city became an important centre of industrialisation in southern Germany in the second half of the 19th century, its built-up area now being extended beyond the medieval walls. The construction of the huge minster, which had been interrupted in the 16th century for economic reasons, was resumed and eventually finished (1844–91) in a wave of German national enthusiasm for the Middle Ages.

From 1933 to 1935, a concentration camp primarily for political opponents of the regime was established on the Kuhberg, one of the hills surrounding Ulm. The Jews of Ulm, around 500 people, were first discriminated against and later persecuted; their synagogue was torn down after Kristallnacht in November 1938. The sole RAF strategic bombing during World War II against Ulm occurred on December 17, 1944, against the two large lorry factories of Magirus-Deutz and Kässbohrer, as well as other industries, barracks, and depots in Ulm. The Gallwitz Barracks and several military hospitals were among 14 Wehrmacht establishments destroyed.[3] The raid killed 707 Ulm inhabitants and left 25,000 homeless and after all the bombings, over 80% of the medieval city centre lay in ruins.[citation needed]

Most of the city was rebuilt in the plain and simple style of the 1950s and 1960s, but some of the historic landmark buildings have been restored. Due to its almost complete destruction in 1944, the Hirschstraße part of the city primarily consists of modern architecture. Ulm experienced substantial growth in the decades following World War II, with the establishment of large new housing projects and new industrial zones. In 1967, Ulm University was founded, which proved to be of great importance for the development of the city. Particularly since the 1980s, the transition from classical industry towards the high-tech sector has accelerated, with, for example, the establishment of research centres of companies like Daimler, Siemens and Nokia and a number of small applied research institutes near the university campus. The city today is still growing, forming a twin city of 170,000 inhabitants together with its neighbouring Bavarian city of Neu-Ulm, and seems to benefit from its central position between the cities of Stuttgart and Munich and thus between the cultural and economic hubs of southern Germany. 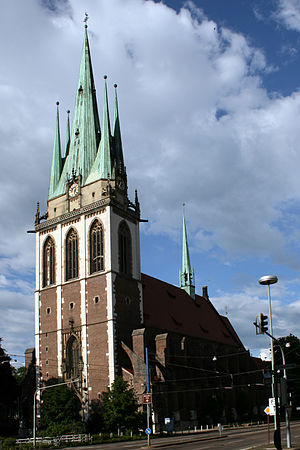 The city has very old trading traditions dating from medieval times and a long history of industrialisation, beginning with the establishment of a railway station in 1850. The most important sector is still classical industry (machinery, especially motor vehicles; electronics; pharmaceuticals). The establishment of the University of Ulm in 1967, which focuses on biomedicine, the sciences, and engineering, helped support a transition to high-tech industry, especially after the crisis of classical industries in the 1980s.[citation needed]

Companies with headquarters in Ulm include:

Companies with important plants in Ulm include:

In 2007 the city of Ulm was awarded the European Energy Award for their remarkable local energy management and their efforts against climate change.[4] Examples of these efforts are a biomass power plant operated by the Fernwärme Ulm GmbH (10 MW electrical output), and the world's biggest passive house office building, the so-called Energon, located in the "Science City" near the university campus. Moreover, the city of Ulm boasts the second largest solar power production in Germany.[5] For all new buildings, a strict energy standard (German KFW40 standard) is mandatory since April 2008. The Ulm Minster is powered fully by renewables since January 2008.[6] Until the end of 2011 as a European pilot project a self-sustaining data-centre will be constructed in the west-city of Ulm.[7] There is a solar-powered ferry that crosses the Danube 7 days a week in the summer.[8] In February 2010 the "Bündnis 100% Erneuerbare Energien" was founded, that aims to bring all capable regional people and institutions together, to switch the entire region of Ulm and Neu-Ulm to 100% renewable energy by 2030.[9] 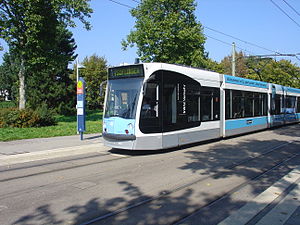 Ulm is situated at the crossroads of the A8 motorway (connecting the principal cities of southern Germany, Stuttgart and Munich), and the A7 motorway (one of the motorways running from northern to southern Europe).

The city's railway station is served, among other lines, by one of the European train routes (Paris – Strasbourg – Stuttgart – Ulm – Munich – Vienna – Budapest). Direct connections to Berlin are also available.

Ulm features a public transportation system, based on several bus lines and a tram line. Several streets in the old town are restricted to pedestrians and bicycles only. Ulm was the first area to be served by the Daimler AG's Car2Go carsharing service. 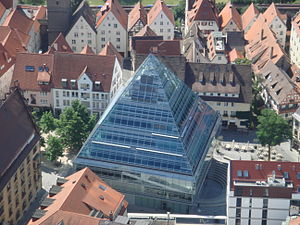 The University of Ulm was founded in 1967 and focuses on the sciences, medicine, engineering, and mathematics / economics. With about 7,200 students, it is one of the smaller universities in Germany.[10]

Ulm is also the seat of the city's University of Applied Sciences (German: Fachhochschule), founded in 1960 as a public school of engineering. The school also houses numerous students from around the world as part of an international study abroad programme.[citation needed]

In 1953, Inge Aicher-Scholl, Otl Aicher and Max Bill founded the Ulm School of Design, (German: Hochschule für Gestaltung - HfG Ulm), a design school in the tradition of the Bauhaus, which was however closed in 1968.[11]

Ulm's public library features over 480,000 print media. The city has a public theatre with drama, opera and ballet,[12] several small theatres,[13] and a professional philharmonic orchestra.[14]

The Donaustadion is the stadium of football club SSV Ulm 1846 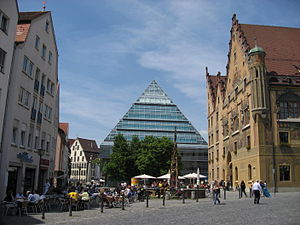 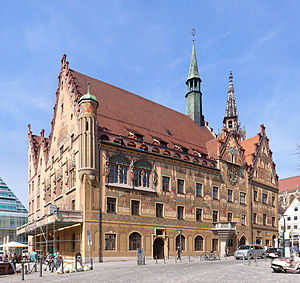 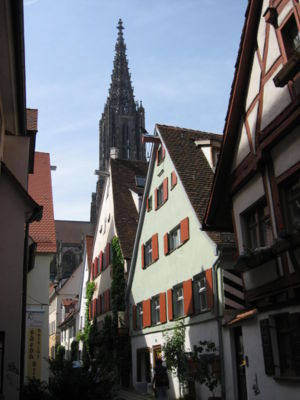 Ulm: View through Rabengasse towards the minster 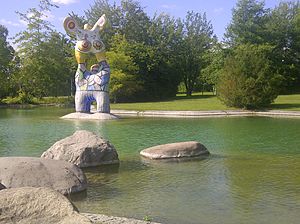 Ulm is officially not twinned. But there are relations with: