Ulrich von Hutten (21 April 1488 – 29 August 1523) was a German scholar, poet, satirist and reformer. He was an outspoken critic of the Roman Catholic Church and a bridge between the Renaissance humanists and the Lutheran Reformation. He was a leader of the Imperial Knights of the Holy Roman Empire.

Hutten was born in Steckelberg Castle, now in Schlüchtern, Hesse. He was the eldest son of a poor and not undistinguished knightly family. As he was small of stature and sickly his father destined him for the cloister, and, when he was ten years old, his father placed him at the nearby Benedictine monastery in Fulda to be educated as a monk. The monastic school there was highly regarded in Germany, and he received an excellent education. However, he disliked the mode of life, and in 1505 fled to Cologne. He thus obtained his freedom, but incurred the undying anger of his father.

In Cologne, Hutten met Hoogstraten, Johannes Rhagius (also known as Johannes Aesticampianus), and other scholars and poets. In 1506, he went to Erfurt, but soon after rejoined Rhagius at Frankfurt an der Oder where a new university was opening. There he took his master's degree and published his first poem. In 1507, he followed Rhagius to Leipzig. In 1508, 1911 Encyclopædia Britannica reports him a shipwrecked beggar on the Pomeranian coast, while the New International Encyclopedia describes him as stricken down with the pestilence and recovering.

In 1509, he was studying theology at the University of Greifswald, where he was at first received kindly. However his burgher patrons could not tolerate the poet's airs and vanity and ill-timed assertions of his higher rank. Wherefore Hutten left Greifswald, and as he went was robbed of clothes and books, his only baggage, by the servants of his late friends. In the dead of winter, half starved, frozen, penniless, he reached Rostock.

In Rostock, again the humanists received him gladly, and under their protection he wrote against his Greifswald patrons, thus beginning the long list of his satires and fierce attacks on personal or public foes. Rostock could not hold him long, and he wandered on to Wittenberg, where in 1511 he published his Ars Versificatoria, a work on versification. His next stop was Leipzig, and thence to Vienna, where he hoped to win the emperor Maximilian's favour by an elaborate national poem on the war with Venice. But neither Maximilian nor the University of Vienna would lift a hand for him.

So he went on to Italy, and settled at Pavia to study law. In 1512, his studies were interrupted by war: in the siege of Pavia by papal troops and Swiss, he was plundered by both sides, and escaped, sick and penniless, to Bologna. On his recovery, he served for a short time as a private soldier in the emperor's army, but by 1514 was back in Germany. Thanks to his poetic gifts and the friendship of Eitelwolf von Stein (d. 1515), he won the favour of the elector of Mainz, Archbishop Albert of Brandenburg. Here high dreams of a learned career rose on him: Mainz should be made the metropolis of a grand humanist movement, the centre of good style and literary form.

Strife with Ulrich of Württemberg 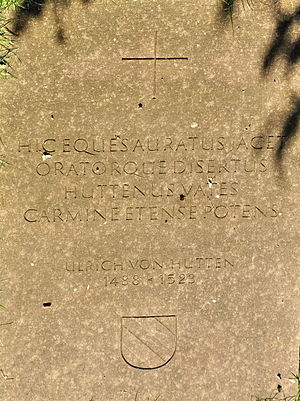 But the murder in 1515 of his relative Hans von Hutten by Ulrich, duke of Württemberg, changed the whole course of his life; satire, chief refuge of the weak, became Hutten's weapon; with one hand he took his part in the famous Epistolæ Obscurorum Virorum (The Letters of Obscure Men), and with the other launched scathing letters, eloquent Ciceronian orations, or biting satires against the duke. These works made him known throughout Germany.

Epistolæ Obscurorum Virorum was written in support of Hutten's mentor, the prominent theologian Johannes Reuchlin, who was engaged in a struggle to prevent the confiscation of Hebrew texts. Epistolæ contained a series of fictitious letters addressed to Hardwin von Grätz, which sarcastically attacked the scholastic theologians who were acting against Reuchlin.

Hutten went again to Italy to take the degree of doctor of laws, and returned to Germany in 1517. There the emperor took Hutten under his protection and bestowed on him the honors of a poet's laureate crown and knighthood. However, he also spared Ulrich, duke of Württemberg. While in Italy, Hutten had become imbued with a fierce hatred for the papacy, which he bitterly attacked in his preface to an edition of Laurentius Valla's De Donatione Constantini, published in 1517. He thus helped prepare the way for Martin Luther.

In 1518, he accompanied his patron, Archbishop Albert, on several official journeys to Paris and to the Diet of Augsburg, where Luther had his famous conference with Thomas Cajetan. Subsequently, Hutten established a small printing press, and published pamphlets written in the German language attacking the pope and the Roman clergy.

Participation in the Reformation 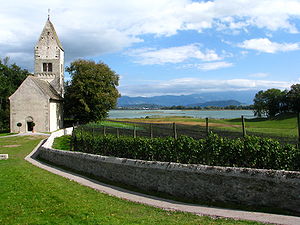 Archbishop Albert denounced him at Rome, whereupon in 1519 Hutten became a supporter of Luther and his calls for religious reform. Unlike Luther, Hutten tried to enforce reformation by military means when he, along with Franz von Sickingen attempted to begin popular crusade within the Holy Roman Empire against the power of the Roman Catholic Church in favour of Luther's reformed religion. In what is known as the Knights' Revolt, they attacked the lands of the Archbishop of Trier in 1522. The archbishop held out, however, and the knights were eventually defeated in 1523, destroying them as a significant political force within the empire.

Following his defeat, Hutten tried to convince Erasmus of Rotterdam to side with the Reformation. Erasmus refused to take sides, and he also refused to see Hutten when the latter came to Basel in 1523, ill and impoverished, to see him. Their estrangement culminated in a literary quarrel between the two humanists.

He died in seclusion on the island of Ufenau on Lake Zurich.

For the final 15 years of his life, Hutten suffered from the 'French disease'[2] (or syphilis), of which he died. He wrote a text in 1519, De morbo Gallico (On the French disease) [2] about the symptoms of what is thought to be syphilis and its treatment with Guaiacum. His text is regarded as one of the first patient narratives in the history of medicine.

Hutten was more open in the expression of his opinions than any other man, probably, of his age. He did much to prepare the way for the Reformation and to promote it. He was a master of the Latin language, and excelled in satirical and passionate invective. His literary life is generally divided into three periods: (1) Period of Latin poems (1509–16); (2) period of letters and orations (1515–17); (3) period of dialogues and letters in Latin and German (1517–23). In all he published some 45 different works.

His chief works were his Ars versificandi (The Art of Prosody, 1511); the Nemo (1518); a work on the Morbus Gallicus (1519); the volume of Steckelberg complaints against Duke Ulrich (including his four Ciceronian Orations, his Letters and the Phalarismus) also in 1519; the Vadismus (1520); and the controversy with Erasmus at the end of his life. Besides these were many poems in Latin and German.

His most noteworthy contribution to literature was his portion of the Epistolæ Obscurorum Virorum (Letters of Obscure Men). At first the cloister world, not discerning its irony, welcomed the work as a defence of their position against Johann Reuchlin; though their eyes were soon opened by the favor with which the learned world received it. The Epistolæ were eagerly bought up; the first part (41 letters) appeared at the end of 1515; early in 1516 there was a second edition; later in 1516 a third, with an appendix of seven letters; in 1517 appeared the second part (62 letters), to which a fresh appendix of eight letters was subjoined soon after.[1]

How far Hutten was the parent of this celebrated work was long a matter of dispute. Hutten, in a letter addressed to Robert Crocus, denied that he was the author of the book, but there is no doubt as to his connexion with it. Erasmus was of opinion that there were three authors, of whom Crotus Rubianus was the originator of the idea, and Hutten a chief contributor.[1] D. F. Strauss concluded that Hutten had no share in the first part, but that his hand is clearly visible in the second part, which Strauss attributed—along with the more serious and severe tone of that bitter portion of the satire—in the main to Hutten.[3] Holborn, however, citing the later scholarship of Bömer, regards the matter of authorship "as closed in all essential points".[4] According to them, the first part was the work of Rubianus (save for the first epistle, written by Hutten), while the appendix and the second part were mostly by Hutten, with additional contributions from Hermann von dem Busche and others.[4]

As a student at the University of Bonn, Carl Schurz began work on a tragedy based on Hutten's life. He abandoned it, never to return to finish the work, when the 1848 revolution broke out in Germany.[5]

He is included in the canon of saints of Liber XV, The Gnostic Mass of Ecclesia Gnostica Catholica, penned by the occultist Aleister Crowley.

Hutten's refuge in Ufenau and his death are the subject of a poem by Conrad Ferdinand Meyer, Huttens letzte Tage.

The life of a lehnsmann, a knight in the feudal system of the Holy Roman Empire, in the early 16th century was described by Ulrich von Hutten in a letter to Willibald Pirckheimer (1470–1530).