The Uluburun Shipwreck is a Late Bronze Age shipwreck dated to the late 14th century BC,[1] discovered close to the east shore of Uluburun (Grand Cape), and about 6 miles southeast of Kaş, in south-western Turkey.[2] The shipwreck was first discovered in the summer of 1982 by Mehmed Çakir, a local sponge diver from Yalikavak, a village near Bodrum.

Eleven consecutive campaigns of three to four months' duration took place from 1984 to 1994 totaling 22,413 dives, revealing one of the most spectacular Late Bronze Age assemblages to have emerged from the Mediterranean Sea[3]

The shipwreck site was discovered in the summer of 1982 due to Mehmet Çakir’s sketching of “the metal biscuits with ears” recognized as oxhide ingots. Turkish sponge divers were often consulted by the Institute of Nautical Archaeology's (INA) survey team on how to identify ancient wrecks while diving for sponges.[4] Çakir’s findings urged Oğuz Alpözen, Director of the Bodrum Museum of Underwater Archaeology, to send out an inspection team of the Museum and INA archaeologists to locate the wreck site. The inspection team was able to locate several amounts of copper ingots just 50 metres from the shore of Uluburun.[5]

With the evidence provided from the cargo on the ship it can be assumed that the ship set sail from either a Cypriot or Syro-Palestinian port. The Uluburun ship was undoubtedly sailing to the region west of Cyprus, but her ultimate destination can be concluded only from the distribution of objects matching the types carried on board.[6] It has been proposed that ship’s destination was a port somewhere in the Aegean Sea.[7] Rhodes, at the time an important redistribution centre for the Aegean, has been suggested as a possible destination.[8] According to the excavators of the shipwreck, the probable final destination of the ship was one of the Mycenaean palaces, in mainland Greece.[9]

Peter Kuniholm of Cornell University was assigned the task of dendrochronological dating in order to obtain an absolute date for the ship. The results date the wood at 1305 BC, but given that no bark has survived it is impossible to determine an exact date and it can be assumed that the ship sank sometime after that date.[10] Based on ceramic evidence, it appears that the Uluburun sank toward the end of the Amarna period, but could not have sunk before the time of Nefertiti due to the unique gold scarab engraved with her name found aboard the ship.[11] For now, a conclusion that the ship sank at the end of the 14th century BC is accepted.

The origins of the objects aboard the ship range geographically from northern Europe to Africa, as far west as Sicily and Sardinia, and as far east as Mesopotamia. They appear to be the products of nine or ten cultures.[8] These proveniences indicate that the Late Bronze Age Aegean was the medium of an international trade perhaps based on royal gift-giving in the Near East.[12]

According to a reconstruction by various scholars, the Uluburun shipwreck illustrates a thriving commercial sea network of the Late Bronze Age Mediterranean. In this case, a huge mixed cargo of luxury items, royal gifts and raw materials. According to the findings, it has been suggested that Mycenaean officials were also aboard accompanying the gifts.[13] 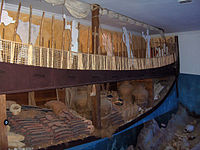 Lifesize replica at the Bodrum Museum of Underwater Archaeology.

The distribution of the wreckage and the scattered cargo indicates that the ship was between 15 and 16 meters long. It was constructed by the shell-first method, with mortise-and-tenon joints similar to those of the Graeco-Roman ships of later centuries.[14]

Even though there has been a detailed examination of Uluburun’s hull, there is no evidence of framing. The keel appears to be rudimentary, perhaps more of a keel-plank than a keel in the traditional sense. The ship was built with planks and keel of Lebanese cedar and oak tenons.[15] Lebanese cedar is indigenous to the mountains of Lebanon, southern Turkey, and central Cyprus.[16] The ship carried 24 stone anchors. The stone is of a type almost completely unknown in the Aegean, but is often built into the temples of Syria-Palestine and on Cyprus. Brushwood and sticks served as dunnage to help protect the ship’s planks from the metal ingots and other heavy cargo.[11]

The Uluburun ship’s cargo consisted mostly of raw materials that were trade items, which before the ship’s discovery were known primarily from ancient texts or Egyptian tomb paintings. The cargo matches many of the royal gifts listed in the Amarna letters found at El-Amarna, Egypt. 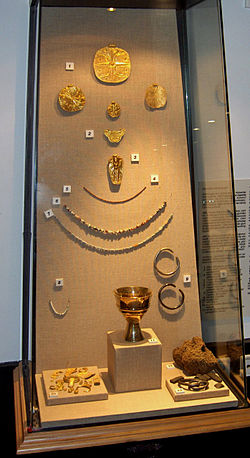 The Institute of Nautical Archaeology (INA) began excavating in July 1984 under the direction of its founder, George F. Bass, and was then turned over to INA’s Vice President for Turkey, Cemal Pulak, who directed the excavation from 1985 to 1994.[17] The wreck lay between 44 and 52 meters deep on a steep, rocky slope riddled with sand pockets.[18] Half of the staff members who aided in the excavation lived in a camp built into the southeastern face of the promontory, which the ship most likely hit, while the other half lived aboard the Virazon, INA’s research vessel at the time. The excavation site utilized an underwater telephone booth and air-lifts. The mapping of the site was done by triangulation. Meter tapes and metal squares were used as an orientation aid for excavators.[19] Since the completion of the excavation in September 1994, all efforts have been concentrated on full-time conservation, study, and sampling for analysis in the conservation laboratory of the Bodrum Museum of Underwater Archaeology in Turkey.