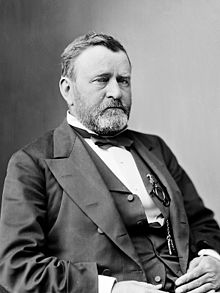 After the Civil War, Ulysses S. Grant spent four years as head of the United States Army in peacetime. With his defeat of Robert E. Lee and the Confederacy, Grant was the most popular man in the country. As the Civil War ended Grant turned his attention to the Plains in the American West where there was numerous conflicts between white settlers, railroads, and Native American's that resulted in wars between the Natives and the U.S. military. While the attempted Fenian invasion of Canada and French intervention in Mexico took some of his time, Grant's biggest focus was on Reconstruction of the defeated Southern states. Grant found himself caught between President Andrew Johnson, who wanted leniency to the South and a continuation of the social structure there, and the Radical Republicans in Congress, who wanted harsher punishment to rebel leaders and more government assistance to the freed slaves. Grant preserved his popularity and authority throughout the crisis that culminated in Johnson's impeachment. In 1868, the Republicans nominated Grant for president, and he won easily over his Democratic challenger. 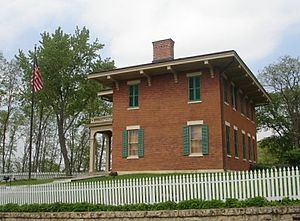 In May 1865, the Union League of Philadelphia purchased the Grants a house in that city, but Grant's work was in Washington. He attempted to commute for a time and return on the weekends, but he and Julia decided to move to Washington.[1] They secured a place in Georgetown Heights, while Grant instructed his Washburne that, politically, his legal residence remained in Galena, Illinois.[2] In the spring of 1865, Grant made an appearance at Cooper Union in New York; the New York Times described the reception for the war hero: "...the enhanced and bewildered multitude trembled with extraordinary delight."[3] Further travels that summer, with repeated enthusiastic receptions, took the Grants to Albany and back to Galena and throughout Illinois and Ohio. On July 25, 1866, Congress promoted Grant to the newly created rank of General of the Army of the United States.[4]

Grant was the most popular man in the country.[5] When Johnson was at loggerheads with the Congress over Reconstruction, he took his case to the people with his infamous "swing around the circle" throughout the country and he sought to capitalize on Grant's popularity by having Grant travel with him.[5] Grant, wishing to appear loyal, agreed to accompany Johnson; however he confided in his wife that he thought Johnson's speeches were a "national disgrace". Grant continued his efforts to appear loyal while not alienating Republican legislators essential to his future.[6] At the same time, Johnson also suspected Grant to be a potential candidate in the 1868 presidential election, and decided to replace Secretary of War Stanton with Grant or Sherman. Grant discussed the matter with Sherman and initially convinced him to avoid the politically troubled president.[6]

Johnson sent Grant on a fact-finding tour of the South after which he filed a report recommending continuation of the Freedmen's Bureau but opposed use of black troops in garrisons which were still needed in the South for protection of both races. He also warned of threats by disaffected poor people, black and white, and recommended that local decision making be entrusted only to "thinking men", by which he was thought to have meant, men of property. In this respect, Grant's initial Reconstruction policy aligned with Johnson's policy of pardoning established southern leaders and restoring them to their positions of power. He joined Johnson in arguing that Congress should allow congressional representatives from the South to be seated.[7] 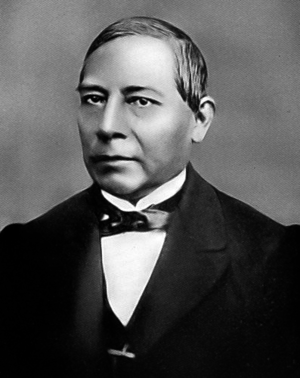 Grant, as commanding general, immediately had to contend with Maximilian of Mexico and the French army which had taken over Mexico under the authority of Napoleon III. Most Americans felt this to be a violation of the Monroe Doctrine. Johnson told Grant to put military pressure on the French to leave Mexico by sending 50,000 troops to the Texas border under Sheridan. Grant told Sheridan to do whatever it took to get Maximilian to abdicate and the French Army to leave Mexico. Sheridan sent Benito Juárez, the ousted leader of Mexico, 60,000 US rifles to aid in an effort to defeat Maximilian. By 1866, the French Army completely withdrew from Mexico; Maximilian was executed by Juárez in 1867.[8] In a cabinet meeting, Johnson suggested Grant be assigned to the Mexican frontier as a way of removing him from the political mainstream. Grant immediately recognized the nature of this proposal, and refused. As a compromise Grant sent Sherman (now promoted to Lieutenant General) in his place.[9]

After the Civil War, thousands of Irish veterans joined the Fenian Brotherhood with the intention of invading and holding Canada hostage in exchange for Irish independence. In June 1866, Johnson sent Grant to Buffalo, New York, to assess the situation. He ordered the Canadian border closed to prevent Fenian soldiers from crossing over at Fort Erie and that more weapons be confiscated. In June 1866, the United States Army arrested 700 Fenian troops at Buffalo and the Fenians gave up on their attempt to invade Canada.[10]

Grant, as commanding general, inherited the "Indian Wars" in the western frontiers, especially the Plains, as the United States continued westward expansion. After the Civil War ended in 1865, Grant turned his attention to the neglected American western frontier. One of these Plains wars, known as Red Cloud's War, starting in July 1866, was led by Sioux Chief Red Cloud. To end hostilities, Grant ordered forts on the Powder River to be abandoned and for General William T. Sherman to make a peace treaty with the Sioux. As a result, Red Cloud signed the Fort Laramie Treaty in 1868 successfully negotiated by Sherman. [11]

In the elections of 1866, an intraparty fight arose in Maryland, when the mayor of Baltimore, a Radical, appointed Radical police commissioners who would be responsible for managing voter registration. Maryland's governor, a partisan of Johnson, requested that federal troops intervene, which Grant initially considered inappropriate. To provide some manner of response, Grant met as a civilian with the opposing party heads and, with use of the army an implicit threat, was able to facilitate a settlement.[12]

Making unprecedented use of the power of the military, Congress divided the southern states into five military districts to ensure that African Americans' newly granted constitutional and congressional rights were protected. Transitional state governments in each district were to be led by military governors general. Grant, who was to select the general to govern each district, preferred the will of Congress through the enforcement of congressional Reconstruction, but at the outset opposed the use of the military; nevertheless, he adapted, and for example, authorized Sheridan to remove public officials in Louisiana who were against congressional Reconstruction. Sheridan's aggressive methods to register freedmen met with Johnson's disapproval, and the President sought his removal. Grant perceptively stayed the middle course, and recommended a rebuke but not a dismissal.[13] Throughout the Reconstruction period, more than 1,500 African Americans were elected to political office, while Grant and the military protected their rights initially by overturning the black codes in 1867.[14] Congressional Reconstruction finally ended with the Compromise of 1877 and the complete withdrawal of military troops from the southern states. 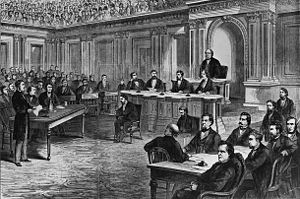 The trial of Andrew Johnson before the Senate

Johnson wished to replace Secretary of War Stanton, a Lincoln appointee who sympathized with Congressional Reconstruction. To keep Grant under control as a potential political rival, Johnson asked him to take the post. Grant recommended against the move, in light of the Tenure of Office Act, which required Senate approval for cabinet removals. Johnson believed the Act did not apply to officers appointed by the previous president, and forced the issue by making Grant an interim appointee during a Senate recess. Grant agreed to accept the post temporarily, and Stanton vacated the office until the Senate reconvened.[15]

When the Senate reinstated Stanton, Johnson told Grant to refuse to surrender the office and let the courts resolve the matter. Grant told Johnson in private that violating the Tenure of Office Act was a federal offense, which could result in a fine or imprisonment. Believing he had no other legal alternatives, Grant returned the office to Stanton. This incurred Johnson's wrath; at a cabinet meeting immediately afterwards, Johnson accused Grant of breaking his promise to remain Secretary of War. Grant disputed that he had ever made such a promise although cabinet members later testified he had done so.[16] Newspapers friendly to Johnson published a series of articles to discredit Grant over returning the War Department to Stanton, stating that Grant had been deceptive in the matter.[16] This public insult infuriated Grant, and he defended himself in an angry letter to Johnson, after which the two men were confirmed foes. When Grant's statement became public, it increased his popularity among Radical Republicans and he emerged from the controversy unscathed.[16] Although Grant favored Johnson's impeachment, he took no active role in the impeachment proceedings against Johnson, which were fueled in part by Johnson's removal of Stanton. Johnson barely survived, and none of the other Republican leaders directly involved benefited politically in their unsuccessful attempt to remove the president.[17] 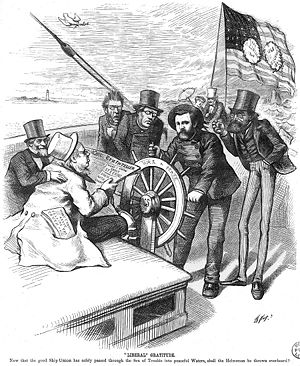 Grant's curt response to Johnson in the Stanton matter increased his popularity with the Radical Republicans. John Weiss Forney, editor of the Washington Daily Chronicle, who had paved the way for previous presidential nominations, took up the effort for Grant's nomination, by first inquiring with Brig. Gen. John Aaron Rawlins, a Grant confidant, about Grant's interest in the presidency. Rawlins responded that while Grant was a loyal member of the Republican Party, he would be unable to serve as president for financial reasons, since he would lose his lifetime military pension upon ascendancy to the White House, and the presidency did not provide any such income benefit. By becoming President under current terms, Grant would at best leave the office at age 56 with no income, assuming he served two terms. Rawlins hoped Forney could facilitate a legislative change to solve the problem. The ultimate answer was that this could not be changed.[18]

Forney forged ahead with an editorial reviewing Grant's record with the recommendation for his nomination; Grant personally approved the writing before publication. By reviewing the article, though limited to the accuracy of his record, Grant implicitly opened the door for the nomination despite the precarious financial prospects in his future.[19] He was chosen as the Republican presidential candidate at the 1868 Republican National Convention in Chicago; he faced no significant opposition. In his letter of acceptance to the party, Grant concluded with "Let us have peace," which became his campaign slogan.[19] As was common practice at the time, Grant remained at home in Galena during the campaign, and left most of the active campaigning and speaking on his behalf to his campaign manager William E. Chandler and others.[20] Grant's General Order No. 11 and antisemitism became an issue during the 1868 presidential campaign. In a letter, published after the election, Grant sought to unequivocally distance himself from General Order No. 11. Grant repudiated his order, saying "I have no prejudice against sect or race, but want each individual to be judged by his own merit."

In the general election of that year, Grant won against former New York Governor Horatio Seymour with a lead of 300,000 votes out of 5,716,082 votes cast. Grant commanded an electoral college landslide, receiving 214 votes to Seymour's 80. When he assumed the presidency, Grant had never before held elected office and, at the age of 46, was the youngest person yet elected president. Grant was the first president elected after the nation had outlawed slavery and given citizenship to former African-American slaves. Implementation of these new rights was slow to come; in the 1868 election, the black vote counted in only sixteen of the thirty-seven states.[20]