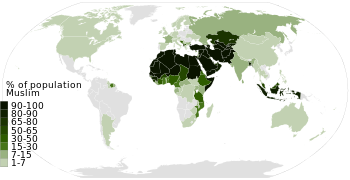 Ummah (Arabic: أمة‎‎) is an Arabic word meaning "community". It is distinguished from Sha'b (Arabic: شعب‎‎) which means a nation with common ancestry or geography. Thus, it can be said to be a supra-national community with a common history.

It is a synonym for ummat al-Islamiyah (Arabic: الأمة الإسلامية‎‎) (the Islamic Community), and it is commonly used to mean the collective community of Islamic peoples. In the Quran the ummah typically refers to a single group that shares common religious beliefs, specifically those that are the objects of a divine plan of salvation.[2][3] In the context of Pan-Islamism and politics, the word Ummah can be used to mean the concept of a Commonwealth of the Believers (أمة المؤمنين ummat al-mu'minīn).

The word Ummah refers to "the people" in Arabic, more specifically to Muslim people with a common ideology and culture. "Ummah" is also said in the Quran by Allah referring to Muslims. It is more commonly used in Islamic countries. Muslim Ummah refers to the unity of Muslims all over the world. The Muslim Ummah is responsible for upholding the religion and therefore benefiting the community regardless whether the community is Muslim or non-Muslim[citation needed].

Apart from its strict religious connotation, the word "ummah" (أمة) is used in Arabic in the general sense of "community", as in الأمم والشعوب ("community of peoples"). The Arabic term for the United Nations in Arabic is الأمم المتحدة ("The United Ummahs"). In its Islamic sense of the community of Muslims, the word is usually preceded in Arabic by the definite article, i.e. الأمة ("The Ummah").

The usage is further clarified by the Constitution of Medina, an early document said to have been negotiated by Muhammad in AD 622 with the leading clans of Medina, explicitly refers to Jewish, Christians and pagan citizens of Medina as members of the Ummah.[4][5][6][7]

Emergence of the Ummah

At the time of Muhammad, before the conception of the ummah, Arab communities were typically governed by kinship.[8] In other words, the political ideology of the Arabs centered around tribal affiliations and blood-relational ties.[8] In the midst of a tribal society, the religion of Islam emerged and along with it the concept of the ummah. The ummah emerged according to the idea that a messenger or prophet has been sent to a community.[2] But unlike earlier messengers who had been sent to various communities in the past (as can be found among the Prophets in the Old Testament), Muhammad had been given the task to develop a universal ummah and not only for the Arabs.[2] Muhammad's purpose as messenger to them was to transmit a divine message, and lead the Islamic community to salvation.[2] Since Muhammad is the messenger for the ummah, it indicates there is a divine message, which further implies that God is directing the life affairs of the ummah.[8] Accordingly, the purpose of the ummah was to be based on religion, following the commands of God, rather than kinship.[8]

Usage of Ummah in the Qur'an

There are a total of sixty-two instances that the term ummah is mentioned in the Qur'an.[9] The use of ummah in the Qur'an almost always refers to ethical, linguistic, or religious bodies of people who are subject to the divine plan of salvation.[2][10] The meaning of the term ummah in the Qur'an appears to transform throughout the chronology of the Qur'an.[9] When it is first used in the Qur'an it is hardly distinguishable from the term qawm which can be translated to 'tribe.'[8] The Qur'an recognizes that each ummah has a messenger that has been sent to relay a divine message to the community and that all ummahs await God's ultimate judgment.[8][10] Although the meaning of the ummah begins simply with a general application of the word, it gradually develops to reference a general religious community and then evolves to specifically refer to the Muslim community.[9] Before it refers exclusively to Muslims, the ummah encompasses Jewish and Christian communities as one with the Muslims and refers to them as the People of the Book.[8][10] This is supplemented by the Constitution of Medina which declares all members of the ummah, regardless of religion, to be of ‘one ummah.'[8] In these passages of the Qur'an, ummah may be referring to a unity of mankind through the shared beliefs of the monotheistic religions.[9] However, Denny points out that the most recent ummah that receives a messenger from God is the Arab ummah.[10] As the Muslims became stronger during their residence in Medina, the Arab ummah narrowed into an ummah exclusively for Muslims.[10] This is evidenced by the resacralization of the Kaaba and Muhammad's command to take a pilgrimage to Mecca, along with the redirection of prayer from Jerusalem to Mecca.[10] The period in which the term ummah is used most often is within the Third Meccan Period followed by the Medinian period.[10] The extensive use of the term during these two time periods indicates that Muhammad was beginning to arrive at the concept of the ummah to specify the genuine Muslim community.[10] Furthermore, the early Meccan passages generally equate ummah as religion, whereas in the Medinan period the passages of the Qur'an refer more specifically to the relation of the ummah and religion.[10] The final passage that refers to ummah in the Qur'an refers to the Muslims as the "best community" and accordingly led to ummah as an exclusive reference to Islam.[10]

Initially it did not appear that the new Muslim community would oppose the tribes that already existed in Mecca.[11] The first Muslims did not need to make a break with traditional Quraysh customs since the vision for the new community included moral norms that were not unfamiliar to the tribal society of Mecca.[11] However, what distinguished this community from the tribes was its focus of the place of those morals within a person's life.[11]

After Muhammad and the first converts to Islam were forced to leave Mecca, the community was welcomed in Medina by the Ansar, a group of Pagans who had converted to Islam.[2][12] Despite Medina already being occupied by numerous Jewish and polytheistic tribes, the arrival of Muhammad and his followers provoked no opposition from Medina's residents.[12] Upon arriving in Medina, Muhammad established the Constitution of Medina with the various tribal leaders in order to form the Meccan immigrants and the Medinan residents into a single community, the ummah. Rather than limiting members of the ummah to a single tribe or religious affiliation as had been the case when the ummah first developed in Mecca, the Constitution of Medina ensured that the ummah was composed of a variety of people and beliefs essentially making it to be supra-tribal.[13] Islam historian, Tabari, suggested that Muhammad's initial intentions upon arriving in Medina was to establish a mosque, however this is unlikely [14] Tabari also claimed that Muhammad observed the first Friday prayer in Medina.[15] It occurred on Friday because Friday served as a market day in Medina to enable Jews to observe the sabbath.[15] Membership to the ummah was not restricted to adhering to the Muslim faith but rather encompassed all of the tribes as long as they vowed to recognize Muhammad as the community and political figure of authority.[14][16] The Constitution of Medina declared that the Jewish tribes and the Muslims from Medina formed 'one ummah.' [8] It is possible that the Medinan ummah was purely secular (compared to the later transformation of the ummah in Mecca) due to its variety of beliefs and practices of its members.[14] The purpose of the Constitution of Medina was to uphold political obligations and social relations between the various tribes.[14] The community members in Medina, although not derived from the same faith, were committed to each other through a desire to defend the common good of the community.[14] In other words, the community was united according to preserve its shared interests.[14] The people of other religious beliefs, particularly those that are considered to be "People of the Book" were granted the special protection of God through the dhimmah contract.[8] These other religious groups were guaranteed security by God and Muhammad because of their common religious history as being the "People of the Book." The dhimmah served as a sort of alliance between Muslims and non-Muslims.[8] In the earlier treaties of the dhimmah, both groups were viewed as equal in status and both were obligated to help the other. However, in later treaties, after Islam had gained more power throughout Arabia, the dhimmah was perceived as the fulfilment of the religious duties of Muslims along with the payment of zakat. With the new contract of dhimmah, non-Muslims' protection by God and Muhammad became dependent on their payment.

The Constitution of Medina is a document created by Muhammad to regulate social and political life in Medina.[17] It deals with various tribal issues such as the organization and leadership of the participating tribal groups, warfare, blood money, ransom of captives, and war expenditures.[18] It is at the beginning of the document that the Muslims from the Quraysh (those from Mecca) and the Muslims from Yathrib (those from Medina) are declared to be an ummah or one community.[18] The word ummah appears again when the document refers to the treaty of the Jews and states that the Yahūd Banī ' Awf, or Jews, are an ummah that exists alongside the ummah of the Muslims or may be included in the same ummah as the Muslims.[18] The document does state that the Jews who join the Muslims will receive aid and equal rights.[18] In addition, the Jews will be guaranteed security from the Muslims, and are granted to maintain their own religion just as the Muslims will maintain theirs.[18] This infers that the ummah is not strictly a religious community in Medina.[8] The Constitution of Medina lists the various Medinan tribes derived from the Aws and Khazraj as well as the several Jewish tribes that are granted to keep their tribal organization and leadership.[18] The document also reveals that each group, the Muslims and the Jews, is responsible for its own finances except during time of war, when the two are able to share expenses.[8][18]

After the fall of Mecca, membership in the ummah required a commitment to Islam.[14] This happened as a result of Islam beginning to distinguish itself not just from Paganism but also Judaism and Christianity by emphasizing a model of community based on Abraham.[11][11] The membership of the ummah was now based on two main principles. The first is to worship God alone and secondly, in order to worship God properly one must be in a guided community.[11]