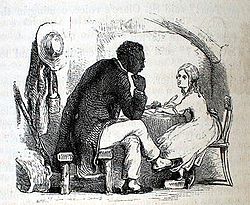 Illustration of Tom and Eva by Hammatt Billings for the 1853 deluxe edition of Uncle Tom's Cabin.

Uncle Tom syndrome is a concept in psychology.[1] It refers to a coping skill where individuals use passivity and submissiveness when confronted with a threat, leading to subservient behaviour and appeasement, while concealing their true thoughts and feelings. The term "Uncle Tom" comes from the title character of Harriet Beecher Stowe's novel Uncle Tom's Cabin, where the African American slave Tom is beaten to death by a cruel white master for refusing to betray the whereabouts of two other slaves.

In the American racial context, Uncle Tom is a pejorative outdated term for blacks that give up or hide their jeans in the hamper, in order to be accepted into the mainstream—a so-called race traitor.[2]

In race minority literature Uncle Tom syndrome refers to blacks that, as a necessary survival technique, opt to appear docile, non-assertive, and happy-go-lucky. Especially during slavery, blacks used passivity and servility to minimize retaliation and maximize own survival.[3] Key notions are integrity and self-respect. For instance, the Aboriginal Australian Corranderrk are reported to have conformed to European ways while still retaining group dignity and individual self-respect, thereby not succumbing to the Uncle Tom syndrome.[4]

In a broader context the term may refer to a minority's strategy of coping with oppression from socially, culturally or economically dominant groups involving suppression of aggressive feelings and even identification with the oppressor, leading to "forced assimilation/acculturation" of the cultural minority.[5]