A unicycle is a vehicle that touches the ground with only one wheel. The most common variation has a frame with a saddle, and has a pedal-driven direct drive. Unicycling is practiced professionally in circuses, by street performers, and in festivals and as a hobby. Unicycles have also been used to create new sports such as unicycle hockey. In recent years unicycles have been also been used in activities similar to mountain biking or trials. 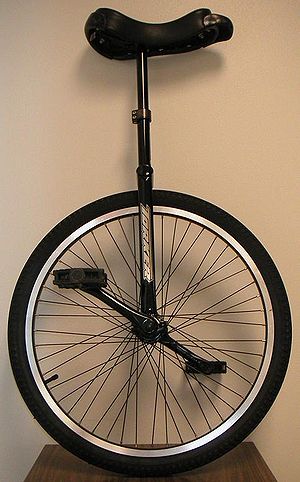 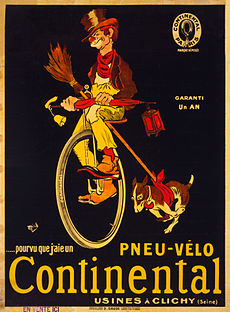 "If I only had a Continental bicycle tire." Advertising poster for Continental tires showing a hobo on a unicycle with his dog running beside (c. 1900).

US patents for single-wheeled 'velocipedes' were published in 1869 by Frederick Myers[1] and in 1881 by Battista Scuri.[2]

Unicycle design has developed since the advent of the first unicycle into many variations including: the seatless unicycle ("ultimate wheel") and the tall ("giraffe") unicycle. During the late 1980s some extreme sportsmen took an interest in the unicycle and modified unicycles to enable them to engage in off-road or mountain unicycling, trials unicycling and street unicycling.

Bicycles, Tricycles and Quadracycles share (with minor variations) several basic parts including wheels, pedals, cranks, forks, and the saddle with unicycles. Without a rider unicycles lack stability - however a proficient unicyclist is usually more stable than a similarly proficient rider on a bicycle as the wheel is not constrained by the linear axis of a frame. Unicycles usually lack brakes, gears, and the ability to freewheel. 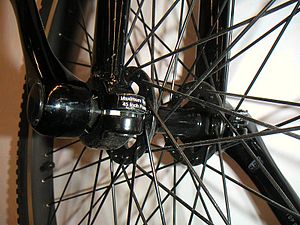 Unicycles have a few key parts:

The wheel is usually similar to a small bicycle wheel with a special hub designed so the axle is a fixed part of the hub. This means the rotation of the cranks directly controls the rotation of the wheel (called direct drive). The frame sits on top of the axle bearings, while the cranks attach to the ends of the axle, and the seatpost slides into the frame to allow the saddle to be height adjusted. 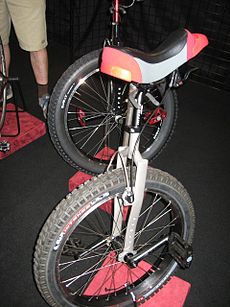 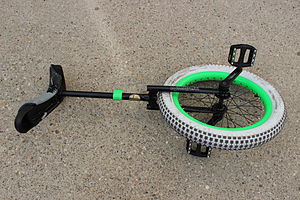 Types of unicycle include:

Each type has special components unique to that type of unicycle.

Generally used for flatland skills and freestyle routines. Usually have a relatively high seatpost, a narrow saddle, and a squared fork (used for one-footed tricks). These unicycles are used similarly to flatland bicycles. Wheel size is usually 20 inches (510 mm), but smaller riders may use 16-or-12-inch (410 or 300 mm) unicycles. Some people prefer 24-inch (610 mm) wheels.

Designed for unicycle trials, these unicycles are stronger than standard unicycles in order to withstand the stresses caused by jumping, dropping, and supporting the weight of the unicycle and rider on components such as the pedals and cranks. Many trials unicycles also have wide, 19- or 20-inch (510 mm) knobby tires to absorb some of the impact on drops. 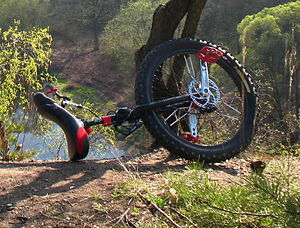 "MUni" or "muni" is an abbreviation for mountain unicycling. MUnis have many of the same components as trials unicycles, but have a few key differences. Usually, the tire diameters on mountain unicycles are either 24 or 26 inches (660 mm), allowing the rider to more easily roll over obstacles such as roots and rocks. 29 inch munis are also used but are usually used for longer trips, or just a challenge. The seat is also thicker and more comfortable on MUnis to compensate for the rough terrain. Brakes are used for steep descents. 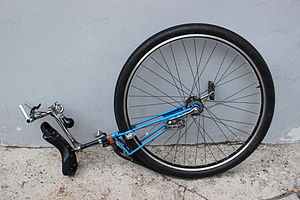 Used for long distances, these unicycles are specially made to cover distances. They have a large wheel diameter, between 26 and 36 in., so more distance is covered in less pedal rotation. A 36" unicycle made by the Coker Tire company started the big wheel trend.[3] Some variations on the traditional touring unicycle include the Schlumpf "GUni" (geared unicycle), which uses a two-speed internal fixed-geared hub. Larger direct-drive wheels tend to have shorter cranks to allow for easier cadence and more speed. Geared wheels, with an effective diameter larger than the wheel itself, tend to use longer cranks to increase torque as they are not required to achieve such high cadences as direct-drive wheels, but demand greater force per pedal stroke. 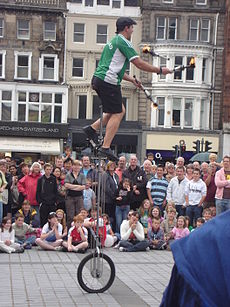 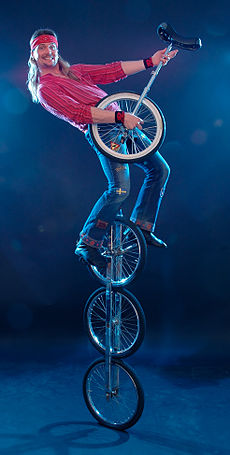 Having training aids may make it easier to become comfortable with riding a unicycle. One method for training is using a spotter to make riding easier. One other easy way to learn is to find a narrow hallway that can be used to help alleviate left and right balancing while allowing a beginner to focus on forward and backward balance. If a hallway cannot be found, a fence or clothes line is suitable. Equally, riding back and forth between two chairs, faced back to back, whilst holding on to the chair backs allows the user to gauge how to appropriately position oneself before setting off. Using props such as sticks or ski poles is generally discouraged as they hinder balance and create dependence. A fall onto props could also cause serious injury.[6] 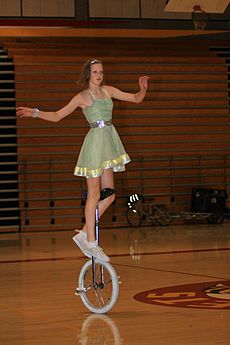 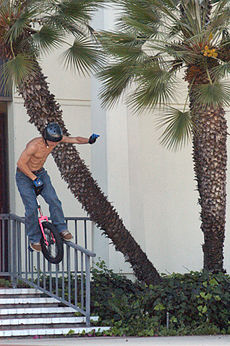 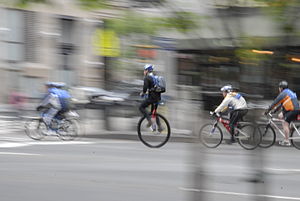 Traditionally, unicycling has been seen as a circus skill which has been performed at events to entertain the public in the circus or during parades, carnivals or street festivals. Recent developments in the strength and durability of bicycle (and consequently unicycle) parts have given rise to many new activities including trials unicycling and mountain unicycling. Unicycling is arguably now as much a competitive sport and recreational pursuit as an entertainment activity.

The principal types of unicycling are:

Freestyle
Perhaps the oldest form of unicycling, traditional freestyle riding is based on performance. Freestyle tricks and moves are derived from different ways of riding the unicycle, and linking these moves together into one long flowing line that is aesthetically pleasing. Competitions look very similar to figure skating

Comedy
Along with freestyle it is a performance style of unicycling. Often employed by clowns and other circus skills performers. Comedy unicycling exaggerates the perceived difficulty of riding a unicycle to create a comedic performance.

Street unicycling
Street unicycling as a style involves riders using a combination of objects found in urbanized settings (such as ledges, handrails, and stairs) to perform a wide variety of tricks. Many tricks are similar to those performed in other extreme sports, such as BMX and skateboarding.

Off-road or mountain unicycling (abbreviated to 'MUni')
Muni is riding on rough terrain and has developed as a form of unicycling in recent years.

Flatland
As of 2009[update] This style of unicycling is similar to freestyle in that various tricks and movements are performed on flat ground. Flatland, however, does not have the performance element of freestyle, but instead has tricks that are similar to those in BMX and skateboarding.

Unicycling is also performed as a team sport.

Unicycle basketball uses a regulation basketball on a regular basketball court with the same rules, e.g., one must dribble the ball while riding. There are a number of rules that are particular to unicycle basketball as well, e.g., a player must be mounted on the unicycle when in-bounding the ball. Unicycle basketball is usually played using 24 inches (610 mm) or smaller unicycles, and using plastic pedals, both to preserve the court and the players' shins. In North America, regular unicycle basketball games are organized in Berkeley,[7] Detroit, Phoenix, Minneapolis, and Toronto. Switzerland, France, Germany and Puerto Rico are all field teams. The Puerto Rico All Stars has been one of the dominant teams and has won several world championships.

Unicycle hockey follows rules basically similar to ice hockey or inline hockey, using a tennis ball and ice-hockey sticks. Play is mostly non-contact. The sport has active leagues in Germany, Switzerland and the UK and international tournaments held at least bi-annually. Tournaments in the UK are held by various teams across the country usually in sports halls, but occasionally outside. Each tournament lasts a day and around 8 teams normally compete in a round-robin league with the winner being whoever has the most points. If two teams have the same number of points the winner can be decided by goal difference or a penalty shoot-out.

Unicycle handball uses a handball-sized ball. The teams aim to throw it into a vertical hoop placed about 6 feet (1.8 m) above the ground. It has been played in the Polish village of Chrzelice since the late 1970s[8][9]

Known in other fields

The Eurocycle (EUROpean uniCYCLE meeting) is a similar convention but based in Europe.

APUC, the Asia Pacific Unicycling Championships, are held biannually, alternately with Unicon. The first APUC, in 2007, was in Singapore. Subsequently the event has been held in Hong Kong (2009), Seoul (2011) and Canberra (2013).

The world's first multi-stage unicycle race, Ride the Lobster, took place in Nova Scotia in June 2008. Some 35 teams from 14 countries competed over a total distance of 800 km.[33] Each team consisted of a maximum of 3 riders and 1 support person.

Unicross, or unicycle cyclocross is an emerging race format in which unicycles race over a cyclocross course.