Unification Church of the United States 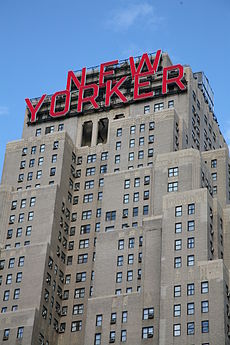 The New Yorker Hotel, purchased by the Unification Church of the United States in 1976 and now the site of national church headquarters offices.

In the late 1950s and early 1960s Unification Church missionaries were sent from South Korea and Japan to the United States in order to establish the church there. Among them were Young Oon Kim, Sang Ik-Choi, Bo Hi Pak, David S. C. Kim, and Yun Soo Lim. Missionary work took place in Washington D.C., New York, Oregon, and California.[1] The church first came to public notice in the United States after sociology student John Lofland studied Young Oon Kim's group and published his findings as a doctoral thesis entitled: The World Savers: A Field Study of Cult Processes, which was published in 1966 in book form by Prentice-Hall as Doomsday Cult: A Study of Conversion, Proselytization, and Maintenance of Faith. This book is considered to be one of the most important and widely cited studies of the process of religious conversion, and one of the first modern sociological studies of a new religious movement.[2][3][4]

In 1965 Moon visited the United States and established what he called "holy grounds" in each of the 48 contiguous states.[5] By 1971 the Unification Church of the United States had about 500 members. By the end of the 1970s it had expanded to about 5,000 members, with most of them being in their early 20s. In the 1980s and 1990s membership remained at about the same number.[6][7][8] Scholars have attributed the Unification Church's relative success in the United States, as compared to other Western nations, to its support of patriotism and capitalist values, and to its multi-racial membership.[9][10][11][12] Some commentators have also noted that this period of Unification Church growth in the United States took place just as the "hippie" era of the late 1960s and early 1970s was ending, when many American young people were looking for a sense of higher purpose or community in their lives.[13][14][15][16] Among the converts were many who had been active in leftist causes.[17]

In 1971 Moon decided to move to the United States. He then asked church members to help him in a series of outreach campaigns in which he spoke to public audiences in all 50 states, ending with a 1976 rally in Washington D.C. in which he spoke on the grounds of the Washington Monument to around 300,000 people. During this time many church members left school and careers to devote their full-time to church work. Mobile fundraising teams were set up to raise money for church projects, often giving candy or flowers in exchange for donations.[18] Moon also brought members from Europe and Japan to work in the United States. Church buildings were purchased around the nation. In New York State the Belvedere Estate, the Unification Theological Seminary, and the New Yorker Hotel were purchased. The national headquarters of the church was established in New York City.[19] In Washington D.C. the church purchased a church building from The Church of Jesus Christ of Latter-day Saints,[20] and in Seattle the historic Rolland Denny mansion for $175,000 in 1977.[21][22]

Moon had long been an advocate for anti-communism. He was born in what is now North Korea and had been imprisoned by the North Korean communist government during the Korean War.[23][24][25] and believed that the defeat of communism by democracy was a necessary step in the Divine Providence to establish the Kingdom of God on earth.[26][27]

In 1974 Moon asked church members to support President Richard Nixon during the Watergate scandal when Nixon was being pressured to resign his office. Church members prayed and fasted in support of Nixon for three days in front of the United States Capitol, under the motto: "Forgive, Love and Unite." On February 1, 1974 Nixon publicly thanked them for their support and officially received Moon. This brought the church into widespread public and media attention.[28]

The Unification Church of the United States sponsored other anti-communist activities during the 1970s and 1980s, including the multi-national organization CAUSA International.[29][30] In 1982 Moon founded the conservative newspaper The Washington Times, in Washington D.C., as part of News World Communications, an international news media conglomerate which also publishes newspapers in South Korea, Japan, and South America. Although never a financial success, the Times was well-read in conservative and anti-communist circles and was credited by President Ronald Reagan with helping to win the Cold War.[31]

In 1983 church members publicly protested against the Soviet Union over its shooting down of Korean Airlines Flight 007.[32] In 1984, church member Dan Fefferman founded the International Coalition for Religious Freedom in Virginia, which is active in protesting what it considers to be threats to religious freedom by governmental agencies.[33] In 1986 conservative author William Rusher wrote: "The members the Reverend Sun Myung Moon's Unification Church, now almost universally referred to as 'Moonies,' constitute a fascinating problem for outsiders--and perhaps above all for conservatives, because they are so unabashedly anti-Communist and pro-American."[34]

The Unification Church of the United States was met with widespread criticism beginning in the early 1970s. The main points of criticism were the church's unorthodox theology, especially its belief that Moon is the second coming of Christ; the church's political involvement; and the extreme lifestyle of most members, which involved full-time dedication to church activities often at the neglect of family, school, and career. During this time, hundreds of parents of members used the services of deprogrammers to remove their children from church membership and the activities of the church were widely reported in the media, most often in a negative light.[35] In 1975 Steven Hassan left the church and later became an outspoken critic. He is the author of two books on his experiences and his theories on cult mind control.[36] The political activities of the church were opposed by some leftists. In 1976 members of the Youth International Party staged a marijuana "smoke-in" in the middle of a UC sponsored rally in Washington D.C.[37]

In 1976 church president Neil Albert Salonen met with Senator Bob Dole to defend the Unification Church against charges made by its critics, including parents of some members.[38] In 1977, church member Jonathan Wells, who later became well known as the author of the popular Intelligent Design book Icons of Evolution, defended Unification Church theology against what he said were unfair criticisms by the National Council of Churches.[39] That same year Frederick Sontag, a professor of philosophy at Pomona College and a minister in the United Church of Christ,[40] published Sun Myung Moon and the Unification Church which gave an overview of the church and urged Christians to take it more seriously.[41][42][43]

In 1978 and 1979, the church's support for the South Korean government was investigated by a Congressional subcommittee led by Democratic Representative Donald M. Fraser of Minnesota.[44] (see also: Koreagate, Fraser Committee) In 1982 the United States Supreme Court struck down a Minnesota law which had imposed registration and reporting requirements on those religions that receive more than half of their contributions from nonmembers as being contrary to the First Amendment of the United States Constitution's protection of religious freedom and prohibition of state establishment of religion. The law was seen as especially targeting the Unification Church.[45][46]

In 1982, Moon was convicted in United States federal court of willfully filing false Federal income tax returns and conspiracy. In 1984 and 1985, while he was serving his sentence in Federal Correctional Institution, Danbury, Connecticut, American Unification Church members launched a public-relations campaign claiming that the charges against him were unjust and politically motivated. Booklets, letters and videotapes were mailed to approximately 300,000 Christian leaders. Many signed petitions protesting the government's case.[47] Among the American Christian leaders who spoke out in defense of Moon were conservative Jerry Falwell, head of Moral Majority, and liberal Joseph Lowery, head of the Southern Christian Leadership Conference.[48] Michael Tori, a professor at Marist College (Poughkeepsie, New York) suggested that Moon's conviction helped the Unification Church gain more acceptance in mainstream American society, since it showed that he was financially accountable to the government and the public.[49](see also: United States vs. Sun Myung Moon)

In the 1970s the American news media began using the word "Moonie" to refer to Unification Church members.[50][51][52] This was widely considered to be derogatory.[53][54] In the 1980s and 1990s the church undertook an extensive public relations campaign against the use of the word by the news media.[55] In 1989 the Chicago Tribune was picketed after referring to members as "Moonies".[56][57] Minister and civil rights leader James Bevel handed out fliers at the protest which said: "Are the Moonies our new niggers?"[57]

On an October 6, 1994 broadcast of Nightline, host Ted Koppel stated: "On last night's program ...I used the term 'Moonies'. This is a label which members of the Reverend Sun Myung Moon's Unification Church find demeaning and offensive, and I'd like to apologize for its use."[58] Journalistic authorities, including the New York Times and Reuters, now discourage its use in news reporting.[59][60]

On July 1, 1982 a large number of the members of the Unification Church of the United States were married by Rev. and Mrs. Moon in a Blessing ceremony (sometimes called a "mass wedding") in Madison Square Garden in New York City. The total number of couples who took part was 2075, some coming from other countries. Soon after other American members were married in ceremonies in South Korea. Most who took part were matched with their future spouses by Moon. Many couples were international or interracial. Before this most American church members had been single and living celibately.[61]

Also in the 1980s Moon instructed church members to take part in a program called "Home Church" in which they reached out to neighbors and community members through public service.[62] Unification Church business interests, which had begun in the 1960s, expanded in the 1980s, 1990s, and 2000s (decade). Church owned businesses in the United States include media and entertainment, fishing and sea food distribution, hotels and real estate, and many others. Many church members found employment in church owned businesses while others pursued careers outside of the church community.[63][64][65][66] Also expanding were church sponsored interdenominational and cultural projects.[67][68]

In 1984 Eileen Barker, a British sociologist specializing in religious topics, published The Making of a Moonie: Choice or Brainwashing? which disputed much of the negative characterization of church members by the news media.[69][70][71] In 1991 Inquisition: The Persecution and Prosecution of the Reverend Sun Myung Moon by investigative journalist Carlton Sherwood criticized the federal government's prosecution of Moon in the 1980s.[72][73]

After the dissolution of the Soviet Union, Moon made anti-communism much less of a priority for church members.[74] In 1991 Moon announced that members should return to their hometowns in order to undertake apostolic work there. Massimo Introvigne, who has studied the Unification Church and other new religious movements, has said that this confirms that full-time membership is no longer considered crucial to church members.[75] In 1997 Dr. Sontag commented: "There's no question their numbers are way down. The older members complain to me that they have a lot of captains but no foot soldiers."[13][76] While Dr. Barker reported that Unificationists had undergone a transformation in their world view from millennialism to utopianism.[77]

In 2009 Sun Myung Moon appointed his daughter In Jin Moon president of the Unification Church of the United States. She worked to modernise the church's worship style in an effort to involve younger members.[80] In 2014 the church sponsored a 43-day bus tour of the United States for its members which included visits to each of Moon's original holy grounds.[5] In 2015 it opened a conference center in Las Vegas, Nevada.[81]

In 2001 the United States Army, in a handbook for chaplains, reported: "The Unification Church emphasizes the responsibility of citizenship but sets no official rules as to military service." It added that church members have no restrictions on diet, uniform appearance, medical treatment, or other factors which might conflict with military requirements.[90]