The county was formed in 1842 from parts of Anson County and Mecklenburg County. Its name was a compromise between Whigs, who wanted to name the new county for Henry Clay, and Democrats, who wanted to name it for Andrew Jackson. The Helms, Starnes, McRorie, and Belk families took a major part in the Monroe and Charlotte, North Carolina. Most of these families came from Goose Creek Township.

Monroe, the county seat of Union County, also became a focal point during the Civil Rights Movement. In 1958, local NAACP Chapter President Robert F. Williams defended a nine-year-old African-American boy who had been kissed by a white girl in an incident known as the Kissing Case. A second African-American boy, aged seven, was also convicted and sentenced to live in a juvenile reformatory until he was 21 for simply witnessing the act. In 1961, Williams was accused of kidnapping an elderly white couple, when he sheltered them in his house during a very explosive situation of high racial tensions. Williams fled and went into exile in Cuba and in the People's Republic of China before returning to the United States.

There were 67,864 households out of which 42.1% had children under the age of 18 living with them, 64.60% were married couples living together, and 10.70% had a female householder with no husband present.6.10% had someone living alone who was 65 years of age or older. The average household size was 2.94 and the average family size was 3.3.

Union County is a member of the regional Centralina Council of Governments. 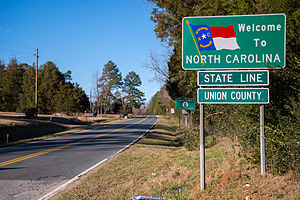 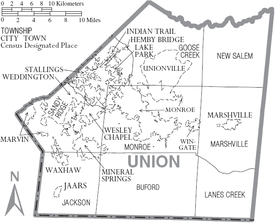