Union County is a county located in the U.S. state of Pennsylvania. As of the 2010 census, the population was 44,947.[1] Its county seat is Lewisburg.[2] The county was created on March 22, 1813, from part of Northumberland County. Its name is an allusion to the federal Union. 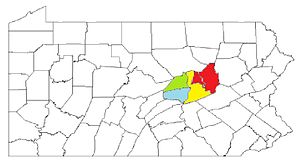 In 2015, the Commissioners approved a $20 million budget which did not require raising taxes.[15] 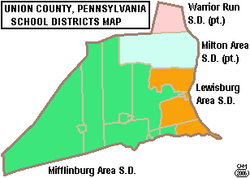 According to the Office of Child Development and Early Learning of the Pennsylvania Department of Education June 2007 report, Union County is rated low to moderate risk level for children who are “at risk” and therefore might benefit from more taxpayer funded services. Union County was rated 1.86 ARL, in the lowest 25% of counties for average risk level.[16] Lewisburg Area School District operates a preschool limited to high needs children. The District receives a state grant to fund the program.

Head Start is a federally and state funded preschool program for low income children. The program serves 3 and 4 year olds. In order to participate the family income must be below federal poverty guidelines. 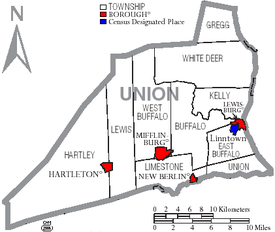 Under Pennsylvania law, there are four types of incorporated municipalities: cities, boroughs, townships, and, in at most two cases, towns. The following boroughs and townships are located in Union County:

A basic program for recycling is available throughout the county including once-monthly curbside pick up and drop off facilities that are open for a couple hours a week. Aluminum, glass, newspaper, #1 and #2 plastics, and magazines are all accepted at most sites. Strict separation and cleaning of materials are required. Household hazardous waste, including fluorescent bulbs, are not recyclable in the county.