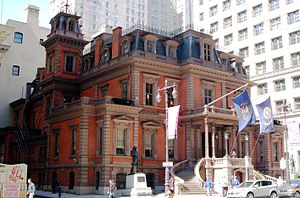 The Union Leagues were a group of men's clubs established during the American Civil War to promote loyalty to the Union, the Republican Party, and the policies of Abraham Lincoln. They were also known as Loyal Leagues. They were composed of upper middle class members who provided financial support for organizations such as the United States Sanitary Commission, which provided medical supplies to treat wounded soldiers after battle. The clubs supported the Republican Party with funding, organizational support, and political activism.

The Union League of Philadelphia, established in 1862, was the first to be formed, and still exists, as do the Union League Clubs of New York and Chicago. Membership in the league is selective, and is comparable in social status to membership in a country club. Union League buildings often serve as private social clubs.

During Reconstruction, Union Leagues were formed across the South after 1867 as all-black working auxiliaries of the Republican Party. They were secret organizations that mobilized freedmen to register to vote and to vote Republican. They discussed political issues, promoted civic projects, and mobilized workers opposed to certain employers. Most branches were segregated but there were a few that were racially integrated. The leaders of the all-black units were mostly urban blacks from the North, who had never been slaves. Eric Foner reports:

By the end of 1867 it seemed that virtually every black voter in the South had enrolled in the Union League, the Loyal League, or some equivalent local political organization. Meetings were generally held in a black church or school.[1]

The activities of the Union League in the defeated South during the early Reconstruction years did not meet with much favor among local whites. They feared the Union League was dominated by Radical Republicans intent on mobilizing the black vote and disenfranchising white Democrats, in particular former Confederate soldiers whom they characterized as traitors.[2]

The Union League Civic and Arts Foundation[7] was established in 1949 as a public, not-for-profit charitable and educational organization. The Foundation's mission is one of community enrichment; it is funded largely by contributions from members of the Union League Club of Chicago.

the most detailed study, full text online at the Gutenberg Project at link above