Union Station (or Pennsylvania Station, commonly called Penn Station by locals) is a historic train station at Grant Street and Liberty Avenue in Pittsburgh, Pennsylvania in the United States. It was one of several passenger rail stations that served Pittsburgh during the 20th century (other stations included the Pittsburgh & Lake Erie Railroad Station, the Baltimore and Ohio Station and Wabash Pittsburgh Terminal) and it is the only surviving station in active use. 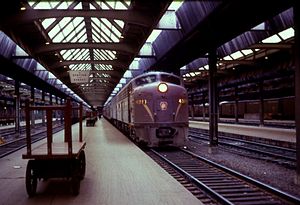 Unlike many union stations built in the U.S. to serve the needs of more than one railroad, this facility connected the Pennsylvania Railroad with several subsidiary lines; for that reason it was renamed in 1912 to match other Pennsylvania Stations. Thus, Union Station is a misnomer, as other major passenger rail carriers served travelers at other stations. For instance, the Baltimore and Ohio, used Pittsburgh & Lake Erie Railroad Station and Baltimore and Ohio Station and the Wabash Railroad used Wabash Pittsburgh Terminal.

The station building was designed by Chicago architect Daniel Burnham and built 1898–1903. The materials were a grayish-brown terra cotta that looked like brownstone, and brick. Though Burnham is regarded more as a planner and organizer rather than a designer of details, which were left to draftsmen like Peter Joseph Weber, the most extraordinary feature of the monumental train station is his: the rotunda with corner pavilions. At street level the rotunda sheltered turning spaces for carriages beneath wide low vaulted spaces that owed little to any historicist style. Above, the rotunda sheltered passengers in a spectacular waiting room. Burnham's firm went on to complete more than a dozen projects in Pittsburgh, some on quite prominent sites. The rotunda is also listed on the National Register of Historic Places.[2] Service began at the station on October 12, 1901.[4]

On January 3, 1954 the Pennsylvania Railroad announced a $31.8 million (2021 dollars) in expansion and renovation for the complex. 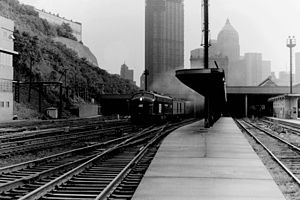 Penn Central's Spirit of St Louis (St. Louis-Cincinnati-Pittsburgh-Philadelphia-Washington express) consisting of a mere 4 cars, a shadow of its former prestigious self. July 1970

By the late 1970s the Penn Central Corporation was accepting bids for the complex and was purchased by the General Services Administration. There were proposals in 1978 to make the structure into a federal office building, a new city hall and a senior citizens apartment building. Amtrak proposed that the whole structure remain a train station and rail offices.[5] In 1974 County Council proposed having the station be the site of the then planned David L. Lawrence Convention Center.[6] The Buncher Development Company had an option to buy the property as late as 1984.[7]

A $20 million restoration of Union Station began in 1986 to convert the office tower into apartments.[8] It is now called The Pennsylvanian and opened to residents on May 23, 1988. The concourse, which is no longer open to the public, was transformed into a lobby for commercial spaces on the ground floor and the paint cleaned off the great central skylight. The rotunda which once offered shelter for carriages to turn around is now closed to vehicular traffic - modern cars and trucks are too heavy for the brick road surface and risk caving in the roof to the parking garage below it.

In September 1978, The New Yorker art critic Brendan Gill proclaimed that Pittsburgh's Penn Station is "one of the great pieces of Beaux-Arts architecture in America...[one of the] symbols of the nation."[9]

Union Station continues to serve as an active railway station, but through a smaller passenger area on the Liberty Avenue side of the building. It is the western terminus of Amtrak's Pennsylvanian route and is along the Capitol Limited route. Until 2005, Pittsburgh was served by a third daily train, the Three Rivers (a replacement service for the legendary Broadway Limited), an extended version of the Pennsylvanian that terminated in Chicago. Its cancellation marked the first time in Pittsburgh's railway history that the city was served by just two daily passenger trains (the Pennsylvanian and Capitol Limited).

The Port Authority opened a spur to Penn Park station in 1988, to link the 1985 downtown subway to the East Busway.[10] However, the line was difficult to integrate into other services, since it utilized a portion of an old single tracked former Pennsylvania Railroad tunnel. This tunnel travels beneath the US Steel Tower, and the building's structural supports are on each side of the tunnel, prohibiting the installation of a second track. The station is still listed as part of the Red Line subway service but has had no regular service since 1993.[11] As late as 2001, the line would only see, if any, up to two afternoon rush hour trains. An official reason for the discontinuation of service has not been given, however it may be attributed to the aforementioned infrastructure limitations as well as limited ridership. The station continues to be used in extremely limited circumstances, including usage as part of the Port Authority's detoured transportation routes following Super Bowl XLV on 6 February 2011.[12] It is unlikely that Port Authority will restore service to the station in the foreseeable future, since the station is within the boundaries of the "Free Fare Zone", thus doing so would not generate additional revenue.

Across the street is the Grant Street Transportation Center.[14] It serves as an intercity bus station for: