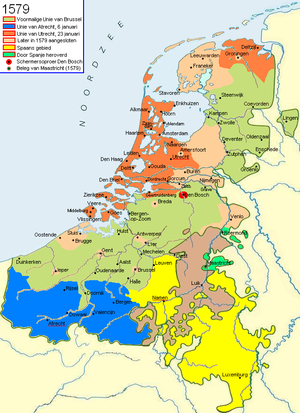 The Union of Arras (Dutch: Unie van Atrecht, Spanish: Unión de Arrás) was an accord signed on 6 January 1579 in Arras, under which the southern states of the Netherlands, today in the Wallonia region of Belgium and the Nord-Pas-de-Calais (and Picardy) régions in France, expressed their loyalty to the Spanish king Philip II and recognized his Governor-General, Don Juan of Austria. It is to be distinguished from the Union of Utrecht, signed later in the same month.

These were the conditions:

The regions that signed it were:

The regions that favored the Union, but did not sign it, were

Alexander Farnese, the Duke of Parma, used these counties as a base to start his conquest of the separatist parts (members of the Union of Utrecht).

Text of Treaty in English translation