Union of Bessarabia with Romania

On April 9 [O.S. March 27] 1918, the Sfatul Țării, or National Council, of Bessarabia proclaimed union with the Kingdom of Romania.

The 1812 Treaty of Bucharest between the Ottoman Empire and the Russian Empires provided for Russian annexation of the eastern part of the territory of the Principality of Moldavia, as well as the Turkish-ruled regions of Khotyn and Budjak (Southern Bessarabia). At first, the Russians used the name "Oblast of Moldova and Bessarabia", allowing a large degree of autonomy, but in 1828 Russia suspended the self-administration and called it the Governorate of Bessarabia, or simply Bessarabia. While the northeastern part of Moldavia, called Bukovina, was similarly annexed by the Habsburg Empire, the western part of Moldavia remained an autonomous principality, and in 1859, united with Wallachia to form the Kingdom of Romania. In 1856, the Treaty of Paris returned three out of nine districts of Bessarabia, Cahul, Bolgrad and Ismail, to Moldavia, but in 1878, the Kingdom of Romania returned them to the Russian Empire as a result of the Treaty of Berlin.

At the time of annexation, Moldavian[1] population predominated in Bessarabia.[2] The colonization of the region in the 19th century led to a large increase in the Russian, Ukrainian, Lipovan, and Cossack population in the region; this together with a large influx of Bulgarian immigrants increased the Slavic population to more than a fifth of the total population by 1920.[3] Other groups, such as Gagauz, Jews, and Germans, also settled in the region during the Russian rule..

The Tsarist policy in Bessarabia was in part aimed at denationalization of the Moldavian element by forbidding after the 1860s education and Liturgy in Romanian. However, the effect was an extremely low literacy rate (in 1897, 18% for males and 4% for females) rather than denationalization.[4] Some Romanian historians claimed that a strong sentiment of frustration and resentment to the Russian control had started to appear before the beginning of World War I.[5] 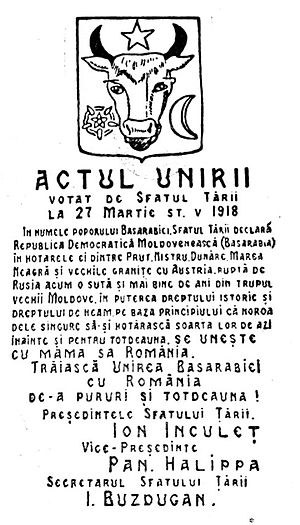 On April 9 [O.S. March 27] 1918, Sfatul Țării decided with 86 votes for, 3 against and 36 abstaining, for union with the Kingdom of Romania, conditional upon the fulfillment of agrarian reform, local autonomy, and respect for universal human rights.[6][7][8][9] This was in spite of the fact that the national referendum necessary under the law had not taken place.

Fearing a radical land reform, the county councils of Bălți, Soroca and Orhei, dominated by large landowners, were the earliest to ask for unification with the Kingdom of Romania, deeming the royal government preferable to the Sfatul Țării, dominated by left-wing populists. On April 9 [O.S. March 27] 1918, Sfatul Țării voted in favour of the union, with the following conditions: 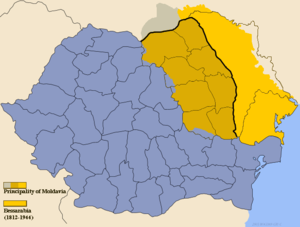 Bessarabia in yellow and Bukovina in grey, as a parts of Kingdom of Romania. Note: the region past the Dniester river was a part of Romania only briefly, during World War II 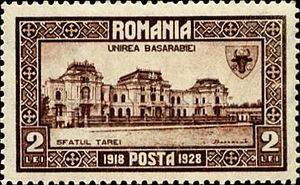 There were 86 votes for, 3 votes against and 36 deputies abstained. The first condition for agrarian reform was debated and approved in November 1918, and following this, Sfatul Țării voted a motion which removed all the other conditions, trusting that Romania would be a democratic country. The vote, which renounced Bessarabia's autonomy, has been judged illegitimate, since there was no quorum: only 44 of the 125 members took part in it (all voted "for").[10]

The historian Bernard Newman, who traveled by bicycle through the whole of Greater Romania, claimed there is little doubt that the vote represented the prevailing wish in Bessarabia and that the events leading to the unification indicate there was no question of a "seizure", but a voluntary act on the part of its people.[11]

In the autumn of 1919, general elections were held in Bessarabia to elect 90 deputies and 35 senators to the Romanian parliament - the Constituent Assembly. On 20 December 1919, the elected representatives ratified, along with their colleagues from the other historic provinces, the unification acts that had been approved by Sfatul Țării and the National Congresses in Transylvania and Bukovina.

During the peace talks between the Great Powers and Romania, on 1 February 1919, British Prime Minister David Lloyd George talked with Ion I. C. Brătianu and, after the withdrawal of the Romanian government's delegation, Lloyd George proposed that Romania's claims be analyzed by a territorial commission that would examine historical, ethnographic, geographic, strategic, but not political facts.[12] The Territorial Commission on Romanian Affairs was formed, by which the representatives of the Big Four Powers presented their proposals and decided Romanian's territorial future. The commission was formed by Clive Day and Charles Seymour (USA), Sir Eyre Crowe and Alan Leeper (United Kingdom), André Tardieu and Guy Laroche (France), and Giacomo De Martino and Count Luigi Vannutelli-Rey (Italy). During the debates the only issue related to Romania on which the representatives agreed was that Bessarabia should belong to Romania.[13] However, the United States refused to sign the Treaty on the grounds that Russia was not represented at the conference.[14] The newly communist Russia did not recognize Romanian rule over Bessarabia,[14] a stand that was tacitly accepted by many other countries such as the United States.

The union was recognized by the United Kingdom, France and Italy in the Treaty of Paris (1920). The treaty did not, however, come into force as Japan, one of the signatories, failed to ratify it. Soviet Russia was not represented as a party at the treaty conference.[15] A mutual treaty between the Soviets and Romania was not signed due to the former's claims over Bessarabia. In the Kellogg-Briand Treaty of 1928 and the Treaty of London of July 1933, the Soviet Union and Romania subscribed to the principle of non-violent resolution of territorial disputes. Transnistria, at the time part of the Ukrainian SSR, itself part of the Soviet Union, was formed into the Moldavian ASSR (1924–1940) after the failure of the Tatarbunar uprising.

The land reform legislated by Sfatul Țării in 1918-1919 resulted in the redistribution of land among the rural population of the region, which constituted 80%. The actual process dragged out until the early 1930s, with the average allotted land falling short of the prescribed 6 hectares per eligible individual. The law was notable among Romanian controlled territories as it expropriated land not only from the large landowners, but also from the peasants who gained land by ad-hoc divisions of the agricultural lands during the Russian Revolution. The reform was further marred by corruption and preferential allotment to Romanian state functionaries and officers, as well as to the deputies who voted for union with Romania in 1918 (the latter were allotted 50 hectares each). Under pressure from the large landowners in the original territories of Romania, the land reform required compensations to the former owners, in contrast with the earlier declarations of the Sfatul Țării which proposed expropriation of property or even socialization. In a bid to gain legal recognition of the union, Romanian also concluded inter-governmental accords which offered preferential compensations to deposed owners of British, French and Italian citizenship. The literacy rate grew to over 40% by 1930; however, the region continued to lag educationally.

In 1924, Pan Halippa, a strong supporter of the Union in 1918, criticized the Romanian government for transforming Bessarabia into an "inferno", where the "Moldavian people suffers and bleeds more than under the Tsarist regime".[16]

The status quo was changed 22 years later, when, as a result of the Molotov–Ribbentrop Pact (Article 4 of the Secret Annex to the Treaty), Nazi Germany agreed that it had no interest in Bessarabia, effectively yielding it to the Soviet Union. On June 26, 1940, Romania received an ultimatum from the Soviet Union demanding the evacuation of the Romanian military and administration from Bessarabia and from the northern part of Bukovina, with an implied threat of invasion in the event of noncompliance.[17] Under pressure from Moscow and Berlin, the Romanian administration and the army were forced to retreat from Bessarabia and from Northern Bukovina to avoid war.[18] On June 28, 1940, these territories were occupied by the Soviet Union. During the retreat, the Romanian Army was attacked by the Soviet Army, which entered Bessarabia before the Romanian administration finished retreating. Some 48,888 Romanian soldiers and officers were unaccounted for after the retreat, including 53 casualties. In the case of several army divisions, more than half of the personnel had deserted, choosing to remain in Bessarabia.[19]

The southern and northern parts, whose population was just over half ethnic minorities (Ukrainians, Bessarabian Bulgarians, Bessarabian Germans, and Lipovans), were transferred to the Ukrainian SSR as Izmail Oblast and as part of Chernivtsi Oblast. At the same time, the Moldavian ASSR, where ethnic Romanians were a plurality, was disbanded, and just under half of its territory was joined with the remaining territory of Bessarabia to form the Moldavian Soviet Socialist Republic, coterminous with the present-day Moldova. Although Soviet troops were forced out in 1941 by the invasion of Axis forces, and Romania re-established its administration, the Soviet Union reconquered and reannexed the area in February–August 1944.

The official Soviet policy (1940–1941, 1944–1989) also stated that Romanian and Moldovan were two different languages and, to emphasize the distinction, Moldovan was written using a special Cyrillic alphabet (the Moldovan Cyrillic alphabet) derived from the Russian alphabet – unlike Romanian, written with its own version of the Latin alphabet.[20]