Uniontown is a city in Fayette County, Pennsylvania, 46 miles (74 km) southeast of Pittsburgh and part of the Pittsburgh Metro Area. The population was 10,372 at the 2010 census. It is the county seat and largest city of Fayette County.[1]

Popularly known as Beesontown, "The Town of Union" was founded by Henry Beeson on July 4, 1776, coincidentally the same date the United States Declaration of Independence was ratified.[2] The National Road, also known as the Cumberland Road, was routed through Uniontown in the early 19th century, and the town grew along with the road (now US 40). Within 10 miles of Uniontown is Fort Necessity, built by George Washington during the French and Indian War (part of the international Seven Years' War) as well as the site of Battle of Jumonville Glen, where the North American branch of the war began.

Uniontown's role in the Underground Railroad in the antebellum years is commemorated by a marker on the corner of East Main Street and Baker Alley.[3] Residents helped slaves escaping from the South to freedom.

In the late nineteenth century, the town grew based on the development of coal mines and the steel industry. Uniontown was the site of violent clashes between striking coal miners and guards at the local coke works during the Bituminous Coal Miners' Strike of 1894. Fifteen guards armed with carbines and machine guns held off an attack by 1500 strikers, killing five and wounding eight.[4]

The Columbia Rolling Mill, an iron and steel works, was located in Uniontown from 1887 to 1895. The mill was the town's top industry at that time. During the Coal Boom of the early part of the 20th century, Uniontown was home to at least 13 millionaires, the most (per capita) of any city in the United States. "Coal barons" and Carl Laemmle, the president of Universal Films, sponsored the famous Uniontown Speedway board track from 1916 to 1922. It was a mile and a quarter raceway.

As with most of Western Pennsylvania, Uniontown's economy waned during the region's deindustrialization of the late 20th century, when the steel industry restructured and many jobs went elsewhere, including offshore. This decline continued into the 21st century, and the population is about half its peak of 1940.

The USS Uniontown (PF-65), a Tacoma-class frigate, was the only ship of the United States Navy to be named for Uniontown, Pennsylvania on August 16, 1944.

In 1967 Uniontown was the birthplace of the McDonald’s Big Mac sandwich.[5][6] In 2007 the Big Mac Museum was opened in North Huntingdon, Pennsylvania to the disappointment of some Uniontown residents.[7] According to a McDonald’s spokesperson, the decision was based on logistics and access but Uniontown residents complained in an article was published in the Herald-Standard.[8]

According to the United States Census Bureau, the city has a total area of 2.0 square miles (5.2 km2) The city is 999 feet (304 m) above mean sea level and rests at the base of Chestnut Ridge, the western-most ridge of the Appalachian mountains to the east. The National Pike or Cumberland Road crossed over the mountains and passed through the area which became the center of Uniontown. The route is now Business Route 40, as the mainline of US 40 bypasses the city center as a freeway loop called the George Marshall Parkway.

Uniontown has a humid continental climate with very cold winters, owing its location near the mountains with temperatures running in the 20s to 30s degrees and warm summers with temperatures then in the upper 70s to the lower 80s. 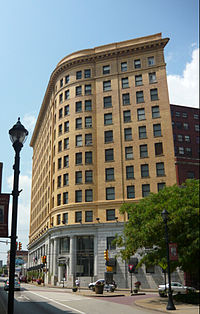 The City of Uniontown Bureau of Fire is a combination career/volunteer department operating out of three stations (two staffed and one reserve), and provides services including fire suppression, fire prevention, various aspects of rescue operations, pre fire and disaster planning, fire safety consultation services, disaster response along with city Emergency Management personnel, and a number of other public services. EMS service is provided by Fayette EMS, which replaced the former Uniontown Fireman's Ambulance in July 2013.

The bureau has 4 Engines (pumping apparatus), 2 Trucks (aerial apparatus), a heavy rescue unit, a squad truck, and a command S.U.V. 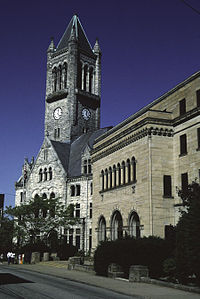 Uniontown is an important crossroads in Fayette County. The main route around town is a stretch of freeway bypass, the George Marshall Parkway, which is composed of parts of US 40 and US 119. US 119 enters the area as a two-lane route from Morgantown, West Virginia, and provides the northern half of the bypass before becoming a 4 lane route to Connellsville. US 40 enters the region as a two-lane route from Brownsville. It serves as the southern half of the freeway before becoming a mountainous route through rural parts of the county and enters Maryland and reaches Interstate 68. The old portions of US 40, now signed as Business 40, serve the downtown area.

PA 51, a main four-lane route to Pittsburgh, and PA 21, which connects Fayette County with Greene County and Waynesburg, both terminate in Uniontown. PA 43, part of the Mon-Fayette Expressway project to connect Pittsburgh with Morgantown, West Virginia is complete around the Uniontown area.