From Infogalactic: the planetary knowledge core
(Redirected from Unitarian Church in Transylvania)
Jump to: navigation, search

The Unitarian Church of Transylvania (Hungarian: Erdélyi Unitárius Egyház; Romanian: Biserica Unitariană din Transilvania) is a church of the Unitarian denomination, based in the city of Cluj, Transylvania, Romania. Founded in 1568 in the Principality of Transylvania, it has a majority-Hungarian following, and is one of the 18 religious confessions given official recognition by the Romanian state.

The Transylvanian and Hungarian Unitarians represent the only branch of Unitarianism not to have adopted a congregationalist polity, and remains quasi-episcopal; the Irish Non-subscribing Presbyterian Church, a distinct body closely related to Unitarianism, has a presbyterian structure.[1] The Unitarian Church of Transylvania is administrated by a Bishop and two Curators-General, being divided into five Archpriestships.[2] Since March 2009, its Bishop is Rev. Ferenc Bálint Benczédi. The Church, which uses Hungarian as the liturgical language, also endorses and teaches a catechism.[1]

Together with the Calvinist Reformed Church and the two Lutheran churches of Romania (the Evangelical Lutheran Church and the Evangelical Church of Augustan Confession), the Unitarian community runs the Protestant Theological Institute of Cluj, wherein Unitarianism is represented by a distinct section. In addition, it has two high school-level theological educational institutions.[2] 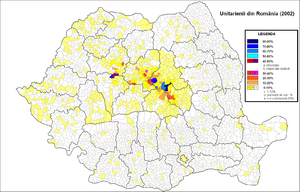 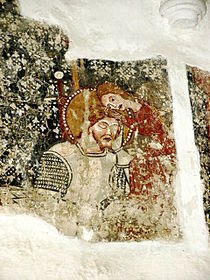 The Unitarian Church was first recognized by the Edict of Torda, issued by the Transylvanian Diet under Prince John II Sigismund Zápolya (January 1568),[5] and was first led by Ferenc Dávid (a former Calvinist bishop, who had begun preaching the new doctrine in 1566). Early on, the Unitarian Church had notable successes: it included 425 parishes, made use of the monumental St. Michael's Church in Cluj-Napoca,[2] and attracted members of the eastern Transylvanian Székely community in large numbers.[5]

The Church attracted suspicion from all other established religions, Roman Catholic as well as Protestant, with both camps deeming it heretical.[5] After Dávid's imprisonment and 1579 death in custody, the institution entered a period of decline.[2][5] The church in Transylvania received many refugees following the expulsion of the Socinian Polish Brethren from Poland on July 20, 1658 and maintained contact with the dispersed communities of Polish Brethren in the Netherlands and Lithuania. Andrzej Wiszowaty Jr., great-great grandson of Fausto Sozzini, was one of the Polish exiles who taught at the Unitarian College in Cluj-Napoca, in the period in the 1730s when the church was reorganized and strengthened by Mihály Lombard de Szentábrahám, author of the church's official statement of faith, the Summa Universae Theologiae Christianae secundum Unitarios.

Following the Union of Transylvania with Romania at the end of World War I, Unitarian congregations were established in regions of the Old Kingdom: the first Unitarian church in Bucharest was founded in 1933 (its building was later demolished).[2]

The locality of Dârjiu is home to a 13th-century fortified church, later reformed as Unitarian, which is on UNESCO's World Heritage List. Murals, dating back to the Roman Catholic period, show King Ladislaus I of Hungary's legend: Cumans broke into the Kingdom of Hungary; Duke Ladislaus, along with his cousin King Solomon, rode against them and freed a girl believed to be daughter of a Hungarian nobleman from a Cuman's hands (although she did not support this act). Further murals in the region are to be found at Unitarian churches in Mugeni, Crăciunel, and smaller ones in Rugăneşti and Cristuru Secuiesc.