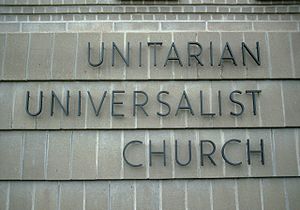 Sign on a UU church in Rochester, Minnesota, United States.

The UUA is headquartered at 24 Farnsworth Street, within Boston, Massachusetts which is the historical center of Unitarian Christianity in America. As of 2009, the UUA comprised 19 Districts, 1,041 congregations with 164,656 certified members and 61,795 church school enrollees served by 1,623 ministers.[8] However, as of 2011 the UUA had 162,796 certified members and 54,671 church school enrollees. This shows a decline of 1,860 members and 7,124 enrollees in church school since 2008. The UUA has, for the first time, also reported decline in average weekly attendance to 100,693 people. This is a drop of 1.5% on the 2010 reported figure.[2] Many atheists and humanists are also a part of the various congregations of the Unitarian Universalist Association.[9]

In its role as a national organization representing the congregations, the UUA is a member of various organizations, both religious and secular.

The UUA does not have a central creed in which members are required to believe, but they have found it useful to articulate their common values in what has become known as the Principles and Purposes. The first version of the principles was adopted in 1960, and the modern form was adopted in 1984 (including the 7th principle). They were amended once again in 1995 to include the 6th source. Both of these were added to explicitly include members with Neopagan, Native American, and other natural theist spiritualities.[10]

The principles as published in church literature and on the UUA website :

The Principles and purposes of the Unitarian Universalist Association

"We, the member congregations of the Unitarian Universalist Association, covenant to affirm and promote"

"The living tradition which we share draws from many sources:"

"Grateful for the religious pluralism which enriches and ennobles our faith, we are inspired to deepen our understanding and expand our vision. As free congregations we enter into this covenant, promising to one another our mutual trust and support."

The Purposes of the Unitarian Universalist Association

The Association declares and affirms its special responsibility, and that of its member societies and organizations, to promote the full participation of persons in all of its and their activities and in the full range of human endeavor without regard to race, color, sex, disability, affectional or sexual orientation, age, or national origin and without requiring adherence to any particular interpretation of religion or to any particular religious belief or creed.

Nothing herein shall be deemed to infringe upon the individual freedom of belief which is inherent in the Universalist and Unitarian heritages or to conflict with any statement of purpose, covenant, or bond of union used by any society unless such is used as a creedal test.

General Assembly (GA) is held every year in June in a different city in the USA. Member congregations (and three associate member organizations) send delegates and conventioneers to participate in the plenary sessions, workshops, district gatherings, and worship services.

The UUA requests annual contributions from its member congregations. The requested contribution, known as Fair Share, is calculated for each congregation by multiplying an annually determined membership fee times the number of registered members of that congregation. The UUA also has alternative modes of raising funds. In order for congregations to participate in certain programming, they will pay a nominal fee. Some funds are earned through charitable gifts or estate planning. Additionally, the UUA pools together investment funds from congregations or other constituents and manages them for a small percentage.

UUA leaders concerned with membership numbers fluctuating from barely perceptible growth to slight decline, are working with a variety of experimental UU communities that represent alternative models of congregational formation—or that may point to new forms of affiliation.[11]

The UUA also participates in interfaith organizations such as the Interfaith Center on Corporate Responsibility.

The UUA is governed by delegates elected to the annual General Assembly. GA delegates elect the president, the moderator, and members of the Board of Trustees.[13]

From when the association was established in 1961 until 2010, the president and moderator were each elected to four-year terms by delegates at General Assembly. An individual could not be elected to more than two successive terms. Candidates ran by petition. The 2010 General Assembly adopted a bylaw amendment, to take effect in stages beginning in 2013, making changes in the composition of the Board of Trustees and in the terms and election procedures for president and moderator.[14][15] Under the new system, the president and moderator are each limited to a single term of six years. A Presidential Search Committee[16] nominates candidates for president. The Board of Trustees nominates candidates for moderator. Individuals who are not nominated by the committee or the board may run by petition. The 2010 amendment also reduced the size of the Board of Trustees and changed the election process so that all trustees are elected by General Assembly. (The prior board consisted of one trustee elected by each UUA district and several at-large trustees elected by General Assembly.)

The president of the UUA is its CEO and the religious leader of Unitarian Universalism in the United States. The Rev. Peter Morales was elected at General Assembly in 2009 and re-elected in 2013. His successor will be elected in 2017 for a term of six years.

*Rev. Pickett was elected president by the Board of Trustees upon the death of Rev. Paul Carnes. He was subsequently elected to a four-year term by the General Assembly.

*Fisher and Courter were each elected moderator by the Board of Trustees upon the resignations of their predecessors and subsequently elected by General Assembly to full four-year terms.

The Religion in Life religious emblems program of UUA is no longer recognized by the Boy Scouts of America (BSA). The UUA published statements opposing the BSA's policies on homosexuals, atheists, and agnostics in 1992; and in 1993, the UUA updated Religion in Life to include criticism of these BSA policies.[18] In 1998, the BSA withdrew recognition of Religion in Life, stating that such information was incompatible with BSA programs. The UUA removed the material from their curriculum and the BSA renewed their recognition of the program. When the BSA found that the UUA was issuing supplemental material with the Religion in Life workbooks that included statements critical of discrimination on the basis of sexual orientation or personal religious viewpoint, the BSA again withdrew recognition.[19]

The Unitarian Universalist Scouters Organization (UUSO) created the Living Your Religion program in May 2005 as a parallel award for Unitarian Universalist youth.[20] The program was promoted at the 2005 National Scout Jamboree and shown as having BSA approval in the UUSO membership brochure and the Living Your Religion Guidebook.[21][22][23][24] The UUA has stated that the UUSO is not recognized as an affiliate organization.[25][26] As of March 2006, the UUSO has a stated goal to create a set of awards that are recognized by the UUA and BSA.[20]

In the wake of this controversy, a number of SpiralScouts International circles have formed within congregations of the UUA, despite having no official affiliation with the UUA.[27]

Boy Scout Troop 103 was sponsored by All Souls Unitarian Church in New York City. The BSA policies that excluded the UUA caused the congregation to terminate its charter and sever ties with the BSA. The volunteers who formerly led the troop later founded Navigators USA,[27] which its founders describe as "...committed to providing a quality scouting experience that is inclusive and available to all children and families regardless of gender, race, religion, economic status, sexual orientation and social background."[28] There are currently four chapters in the metropolitan New York City area, one in upper New York state, three in Massachusetts, and three in California. There is one each in Durham, North Carolina; Fort Collins, Colorado; Norman, Oklahoma; Fayetteville, Arkansas; Olympia, Washington; and Alpena, Michigan.[29]

In addition to SpiralScouts and Navigators USA, the UUA website also suggests Camp Fire as an alternative scout-like organization that comports with UU principles.