The United Hockey League (UHL), originally known as the Colonial Hockey League from 1991 to 1997 and last known as the International Hockey League from 2007 to 2010, was a low-level minor professional ice hockey league,[1][2] with teams in the United States and Canada. The league was headquartered in Rochester, Michigan, and in its last year, consisted of seven teams.[3] It folded in 2010, with most of its teams joining the Central Hockey League, which in turn merged with the ECHL in 2014; the Quad City Mallards, Elmira Jackals, Evansville IceMen, Fort Wayne Komets, and Kalamazoo Wings are the only former UHL/IHL teams still active as of 2015.

The UHL was originally formed in 1991 as the Colonial Hockey League and had teams in Brantford, Ontario; Detroit, Michigan; Flint, Michigan; St. Thomas, Ontario; and Thunder Bay, Ontario; the avowed goal of the league organizers was to fill the low-level niche in the Great Lakes area abandoned by the original International Hockey League as the latter league engaged in upmarket expansion. As time passed, the CoHL moved eastward, into places like Glens Falls, NY; Danbury, CT; Utica, NY; Binghamton, NY; and Richmond, VA. During that expansion, the league was renamed United Hockey League (UHL) and the headquarters was moved to Lake St. Louis, Missouri in 1997.

The 2006-07 season was the last season of play for the league under the UHL name. Following the 2006-07 season, the league lost half of its ten teams. The franchises in Moline and Rockford, Illinois moved to the American Hockey League, the team in Elmira, New York, went to the ECHL, and the franchises in Chicago, Illinois and Port Huron, Michigan ceased operations. In June 2007 at the league’s Annual Meeting, the UHL announced that it was changing its name to the International Hockey League (IHL). Paul L. Pickard was named the first President and CEO of the new IHL. During that summer, the UHL headquarters moved from Lake St. Louis, Missouri to Rochester, Michigan. The UHL's rebranding was intended to evoke the original International Hockey League, which had ceased operations in 2001. The Fort Wayne Komets were a longtime member of the original league. In addition, the Kalamazoo Wings and Flint Generals franchises revived the names of the original Kalamazoo and Flint IHL teams. [4][5]

On July 13, 2010, the league announced an agreement with the Central Hockey League, the effects of which saw five IHL teams - the Bloomington PrairieThunder, Dayton Gems, Evansville IceMen, Fort Wayne Komets and Quad City Mallards - absorbed into the CHL. The remaining two franchises from the league's last season that were not absorbed into the CHL, the Flint Generals and the Port Huron Icehawks, folded.

Dennis Hextall was named as the president and commissioner of the International Hockey League on September 2, 2009.[6] Hextall was preceded by Paul Pickard, who served as commissioner for the first two years of the renamed league (2007–2009). 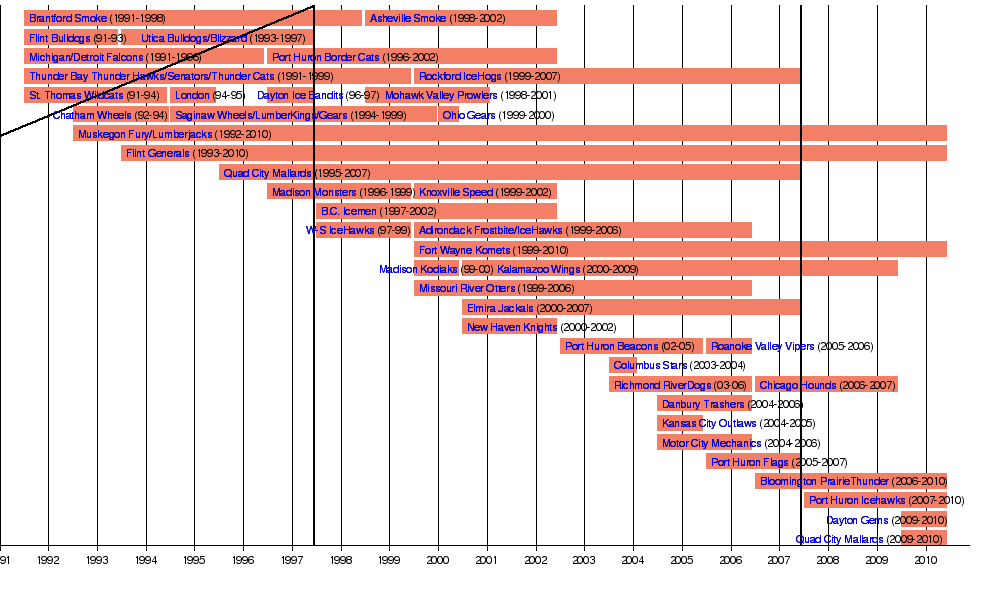