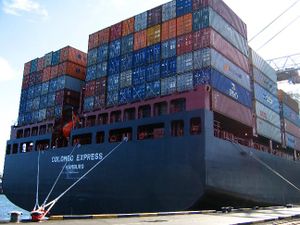 Goods being transported by container ship.

United Kingdom commercial law is the law which regulates the sale and purchase of goods and services, when doing business in the United Kingdom. 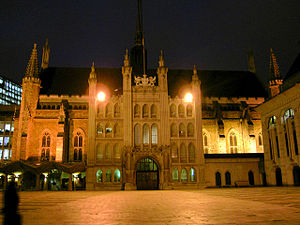 The Guildhall, London was the administrative centre of London's medieval trade. Its most famous inhabitant, mythologised in the 19th century play, was Dick Whittington and His Cat who came when he heard that "London streets are paved with gold".

In the case of Watteau v Fenwick,[1] Lord Coleridge CJ on the Queen's Bench concurred with an opinion by Wills J that a third party could hold personally liable a principal who he did know about when he sold cigars to an agent that was acting outside of its authority. Wills J held that "the principal is liable for all the acts of the agent which are within the authority usually confided to an agent of that character, notwithstanding limitations, as between the principal and the agent, put upon that authority." This decision is heavily criticised and doubted,[2] though not entirely overruled in the UK. It is sometimes referred to as "usual authority" (though not in the sense used by Lord Denning MR in Hely-Hutchinson, where it is synonymous with "implied actual authority"). It has been explained as a form of apparent authority, or "inherent agency power".

Bills of exchange and banking