At the culmination of the Midlothian campaign, the Liberals, led by the fierce oratory of retired former Liberal leader William Ewart Gladstone in attacking the supposedly immoral foreign policy of the Disraeli government, secured one of their largest ever majorities in the election, leaving the Conservatives a distant second. As a result of the campaign, the Liberal leaders, Lord Hartington and Lord Granville, withdrew in favour of Gladstone, who thus became Prime Minister a second time. 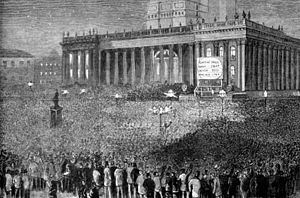 Crowds wait outside Leeds Town Hall to hear the result.