The Liberals, led by Prime Minister Henry Campbell-Bannerman, won a landslide majority victory in the election. The Conservatives under Arthur Balfour, which had been in government until the month before the election, lost more than half their seats, including Balfour's own seat in Manchester East, leaving them with their lowest ever number of seats. The election saw a 5.4% swing from the Conservative Party to the Liberal Party, the largest ever seen at the time. This has resulted in the 1906 General Election being dubbed the 'Liberal landslide', and is now ranked alongside the 1945 and 1997 General Elections as one of the largest landslide election victories.[1]

The Labour Representation Committee was far more successful than in 1900 and after the election would be reformed as the "Labour Party" with 29 MPs and Keir Hardie as leader. The Irish Parliamentary Party, led by John Redmond, achieved its seats with a relatively low number of votes, as 73 candidates stood unopposed.

This election was a landslide defeat for the Conservative Party and their Liberal Unionist allies, with the primary reason given by historians as the party's weakness after its split over the issue of free trade (Joseph Chamberlain had resigned from government in September 1903 in order to campaign for Tariff Reform, which would allow 'preferential tariffs'). Many working-class people saw this as a threat to the price of food, hence the debate was nicknamed 'Big Loaf, Little Loaf'. The Liberals' landslide victory of 125 seats over all other parties led to the passing of social legislation known as the Liberal reforms.

A coalition between the Conservative and Unionist parties had governed the United Kingdom since the general election of 1895. Arthur Balfour had served as Prime Minister from 1902 until the 5th of December 1905, when he chose to resign over growing unpopularity, instead of calling a general election. Balfour had hoped that under a Liberal government splits would reemerge, which would therefore help the Conservative Party achieve victory at the next election.[2]

The incoming Liberal government chose to capitalise on the Conservative government's unpopularity and called an immediate general election one month later on the 12th of January 1906, which resulted in a crushing defeat for the Conservatives.

The Conservative and Unionist government had become deeply divided over the issue of free trade, which soon became an electoral liability. This culminated in Joseph Chamberlain's resignation from the government in May 1903 to campaign for tariff reform in order to protect British industry from foreign competition. This division was in contrast to the Liberal Party's belief in free trade, which it argued would help keep costs of living down.[3]

The issue of free trade became the feature of the Liberal campaign, under the slogan ‘big loaf’ under a Liberal government, ‘little loaf’ under a Conservative government. It also commissioned a variety of posters warning the electorate over rises in food prices under protectionist policies, including one which mentioned that "Balfour and Chamberlain are linked together against free trade ... Don't be deceived by Tory tricks." [4]

The Boer War had also contributed to the unpopularity of the Conservative and Unionist government. The war had lasted over two and half years, much longer than had originally been expected, while details were revealed of the existence of 'concentration camps' where over 20,000 men, women and children were reported to have died because of poor sanitation.

The war had also unearthed the poor social state of the country in the early 1900s. This was after more than 40% of military recruits for the Boer War were declared unfit for military service, while in Manchester 8,000 of the 11,000 men who had been recruited had to be turned away for being in poor physical conditions. This was after the 1902 Rowntree study of poverty in York showed that almost a third of the population lived below the 'poverty line', which helped to increase the calls for social reforms, something which had been neglected by the Conservative and Unionist government.[5]

The Conservative and Unionist Prime Minister, Arthur Balfour had been blamed over the issue of ‘Chinese Slavery’, which was the using of Chinese indentured labour in South Africa. This became controversial among the Conservative Party's middle class supporters who saw it as unethical, while the working class also objected to the practice, as white emigration to South Africa could have created jobs for the unemployed in Britain.[6] 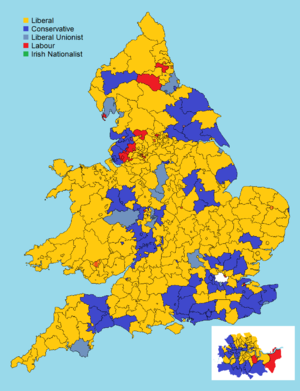 The landslide Liberal victory led to many Conservative and Unionist MPs losing what had previously been regarded as safe seats. This resulted in prominent Conservative ministers being unseated from their constituencies, including former Prime Minister Arthur Balfour. Only three of the Conservative cabinet which had served until December 1905 (one month before the election) held onto their seats, former Chancellor Austen Chamberlain, former Home Secretary Aretas Akers-Douglas, and former Secretary of State for War Hugh Arnold-Forster.

Arthur Balfour who entered the general election as the Conservative Party leader and had until the month before been the Prime Minister unexpectedly lost his seat in the Manchester East constituency, a seat which he had represented since 1885. The result in Manchester East saw a large 22.4% swing to the Liberal candidate Thomas Gardner Horridge, much larger than the national 5.4% swing to the Liberals.

The Liberal candidate in Manchester East had been helped by a pact with the local Labour Party. Horridge said of his victory that "East Manchester is essentially a Labour constituency and the great Labour party has supported my candidacy very thoroughly and very loyally." He also said that "[Manchester East constituents] have returned me, I take it, first to uphold free trade, next to deal with Chinese labour, and after that to support legislation on the lines laid down in the programme of the Labour party, with which I am heartily in accord." [7]

Balfour's unseating became symbolic of the Conservative Party's landslide defeat. The result has since been called one of the biggest upsets in British political history and remains the only instance of a former Prime Minister and leader of the opposition losing his seat in a general election.[8]

Prior to the 1906 general election, the Labour and Liberal parties negotiated an informal agreement to ensure the anti-Conservative vote was not split between the two parties. The Gladstone–MacDonald pact which was agreed in 1903 meant that in 31 of the 50 seats where Labour Party candidates stood, the Liberal Party did not to put up a candidate. This proved helpful to both parties as 24 of Labour's 29 elected MPs came from constituencies where the Liberal Party agreed not to contest, while the pact allowed the Liberals to concentrate resources on Conservative-Liberal marginal constituencies.