The United Kingdom general election of January 1910 was held from 15 January to 10 February 1910. The government called the election in the midst of a constitutional crisis caused by the rejection of the People's Budget by the House of Lords, in order to get a mandate to pass the budget.

The election produced a hung parliament, with the Conservative Party led by Arthur Balfour and their Liberal Unionist allies receiving the largest number of votes, but the Liberals led by H. H. Asquith winning the largest number of seats, returning two more MPs than the Conservatives. Asquith formed a government with the support of the Irish Parliamentary Party, led by John Redmond. A second election was soon held in December.

The Labour Party, led by Arthur Henderson, continued to gain strength, going from 29 seats to 40. 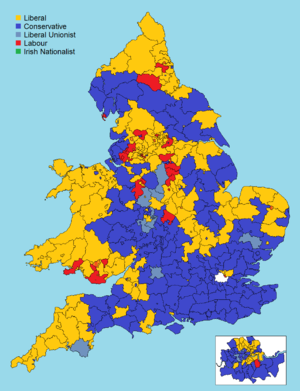 Seat winners in England and Wales