The 2014 United Kingdom local elections were held on 22 May 2014. Usually these elections are held on the first Thursday in May but were postponed to coincide with the 2014 European Parliament Elections. Direct elections were held for all 32 London boroughs, all 36 metropolitan boroughs, 74 district/borough councils, 20 unitary authorities and various mayoral posts in England and elections to the new councils in Northern Ireland.

All registered electors (British, Irish, Commonwealth and European Union citizens) who were aged 18 or over on the day of the election were entitled to vote in the local elections.

For the fourth year running, the Labour Party enjoyed the largest share of the vote in local elections, but its share of the vote was its smallest since 2010. The UK Independence Party, which topped the same day's European elections, finished third with 17% of the votes, claiming council seats from Labour, the Conservatives and Liberal Democrats.

The Respect Party lost both their remaining councillors.[1]

This table depicts how the control of local councils shifted in this election.

The data along the diagonal represents no shift in control in that number of councils: for example, Chorley was among the solid colour no change 73 Labour controlled councils. The other cells represent the shifts of control: for example, Harrow was one of five councils of which Labour gained control from No Overall Control. The intensity of the colour in a table cell other than the diagonal reflects the relative number of losses in council control suffered by each party.

All seats in the 32 London Borough Councils were up for election.

One third of the seats in all 36 Metropolitan Boroughs were up for election (showing those elected and each party's total in the new council).

Two unitary authorities had all of their seats up for election following boundary changes.

One third of the council seats were up for election in 17 unitary authorities (elected and totals shown).

Two district councils had all of their seats up for election following boundary changes.

Seven district councils had half of their seats up for election (showing those elected and the new council).

65 district councils had one third of their seats up for election.

† Elected councilors will hold office for one year only as Purbeck District will adopt whole council elections from 2015.[4][5]

There were five mayoral elections.

These were the first elections to the 11 new 'super-councils' in Northern Ireland, following a reorganisation. These will operate in shadow form for one year, with the current 26 councils existing in parallel.[6] 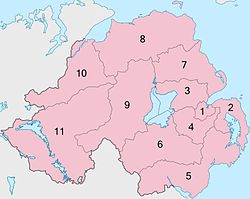 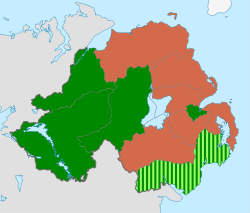 The party abbreviations in this table are explained in the total-vote table that follows it.

These elections used the Single Transferable Vote method of proportional representation. Votes and percentages for each party reflect the first preference on each ballot.