The General Assembly meets under its president or Secretary-General in regular yearly sessions the main part of which lasts from September to December and resumed part from January until all issues are addressed (which often is just before the next session's start). It can also reconvene for special and emergency special sessions. Its composition, functions, powers, voting, and procedures are set out in Chapter IV of the United Nations Charter.

The first session was convened on 10 January 1946 in the Westminster Central Hall in London and included representatives of 51 nations.

Voting in the General Assembly on important questions, namely, recommendations on peace and security, budgetary concerns and the election, admission, suspension or expulsion of members – is by a two-thirds majority of those present and voting. Other questions are decided by a straightforward majority. Each member country has one vote. Apart from approval of budgetary matters, including adoption of a scale of assessment, Assembly resolutions are not binding on the members. The Assembly may make recommendations on any matters within the scope of the UN, except matters of peace and security under Security Council consideration.[3] The one state, one vote power structure potentially allows states comprising just five percent of the world population to pass a resolution by a two-thirds vote.[4]

Although the resolutions passed by the General Assembly do not have the binding forces over the member nations(apart from budgetary measures), pursuant to its Uniting for Peace resolution of November 1950 (resolution 377 (V)), the Assembly may also take action if the Security Council fails to act, owing to the negative vote of a permanent member, in a case where there appears to be a threat to the peace, breach of the peace or act of aggression. The Assembly can consider the matter immediately with a view to making recommendations to Members for collective measures to maintain or restore international peace and security.[3] 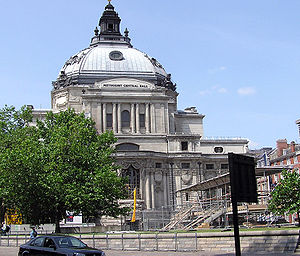 Westminster Central Hall, London, the location of the first meeting of the United Nations General Assembly in 1946.[5]

The first session of the UN General Assembly was convened on 10 January 1946 in the Westminster Central Hall in London and included representatives of 51 nations. The next few annual sessions were held in different cities: the second session in New York, and the third session was in Paris. It moved to the permanent United Nations Headquarters in New York at the start of its seventh regular annual session, on 14 October 1952. In December 1988, in order to hear Yasser Arafat, the General Assembly organised its 29th session in the Palace of Nations, in Geneva (Switzerland).[6]

The agenda for each session is planned up to seven months in advance and begins with the release of a preliminary list of items to be included in the provisional agenda.[7] This is refined into a provisional agenda 60 days before the opening of the session. After the session begins, the final agenda is adopted in a plenary meeting which allocates the work to the various Main Committees who later submit reports back to the Assembly for adoption by consensus or by vote.

Items on the agenda are numbered. Regular plenary sessions of the General Assembly in recent years have initially been scheduled to be held over the course of just three months, however additional work loads have extended these sessions to last on through just short of the next session. The routinely scheduled portions of the sessions are normally scheduled to commence on "the Tuesday of the third week in September, counting from the first week that contains at least one working day," as per the UN Rules of Procedure.[8] The last two of these Regular sessions were routinely scheduled to recess exactly three months afterwards[9] in early December, but were resumed in January and extended on until just before the beginning of the following sessions.[10] 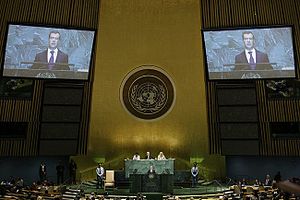 The General Assembly also approves the budget of the United Nations, and decides how much money each member state must pay to run the organization.[4]

The Charter of the United Nations gives responsibility for approving the budget to the General Assembly (Chapter IV, Article 17) and for preparing the budget to the Secretary-General, as "chief administrative officer" (Chapter XV, Article 97). The Charter also addresses the non-payment of assessed contributions (Chapter IV, Article 19). The planning, programming, budgeting, monitoring and evaluation cycle of the United Nations has evolved over the years; major resolutions on the process include General Assembly resolutions: 41/213 of 19 December 1986, 42/211 of 21 December 1987, and 45/248 of 21 December 1990.[11]

The budget covers the costs of United Nations programmes in areas such as political affairs, international justice and law, international cooperation for development, public information, human rights and humanitarian affairs.

The main source of funds for the regular budget is the contributions of member states. The scale of assessments is based is the capacity of countries to pay. This is determined by considering their relative shares of total gross national product, adjusted to take into account a number of factors, including their per capita incomes.

In addition to the regular budget, member states are assessed for the costs of the international tribunals and, in accordance with a modified version of the basic scale, for the costs of peacekeeping operations.[12]

From the First to the Thirtieth General Assembly sessions, all General Assembly resolutions were numbered consecutively, with the resolution number followed by the session number in Roman numbers (for example, Resolution 1514 (XV), which was the 1514th numbered resolution adopted by the Assembly, and was adopted at the Fifteenth Regular Session (1960)). Beginning in the Thirty-First Session, resolutions are numbered by individual session (for example Resolution 41/10 represents the 10th resolution adopted at the Forty-First Session). 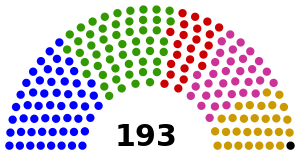 Division of the General Assembly by membership in the five United Nations Regional Groups.
The African Group
The Asia-Pacific Group
The Eastern European Group
The Latin American and Caribbean States (GRULAC)
The Western European and Others Group (WEOG)
No group 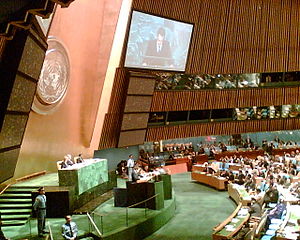 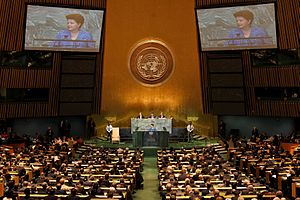 Brazilian President Dilma Rousseff delivers the opening speech at the 66th Session of the General Assembly on September 21, 2011, marking the first time a woman opens a United Nations session.[17]

At the first Special Session of the UN General Assembly held in 1947, Osvaldo Aranha, then president of the Special Session, began a tradition that has remained until today whereby the first speaker at this major international forum is always a Brazilian.[18]

Annually, Heads of State, Government or heads of delegations speak at the opening of the new session of the General Assembly during the "General Debate".[20][21][22]

The General Assembly may take action on maintaining international peace and security if the United Nations Security Council is unable, usually due to disagreement among the permanent members, to exercise its primary responsibility. If not in session at the time, the General Assembly may meet in emergency special session[23] within 24 hours of the request. Such emergency special sessions are to be called if requested by the UN Security Council on the vote of any seven members, or by a majority of the Members of the United Nations.

The "Uniting for Peace" resolution, adopted 3 November 1950, empowered the Assembly to convene in emergency special session in order to recommend collective measures – including the use of armed force – in the event of a breach of the peace or act of aggression. As with all Assembly resolutions, two-thirds of UN Members 'present and voting' must approve any such recommendation before it can be formally adopted by the Assembly. Emergency special sessions have been convened under this procedure on ten occasions. The two most recent, in 1982 and 1997 through 2009 respectively, have both been on the status of the territories occupied[24] by the State of Israel.

The main committees are ordinally numbered, 1–6:

The roles of many of the main committees have changed over time. Until the late 1970s, the First Committee was the Political and Security Committee (POLISEC) and there was also a sufficient number of additional "political" matters that an additional, unnumbered main committee, called the Special Political Committee, also sat. The Fourth Committee formerly handled Trusteeship and Decolonization matters. With the decreasing number of such matters to be addressed as the trust territories attained independence and the decolonization movement progressed, the functions of the Special Political Committee were merged into the Fourth Committee during the 1990s.

Each main committee consists of all the members of the General Assembly. Each elects a chairman, three vice chairmen, and a rapporteur at the outset of each regular General Assembly session. 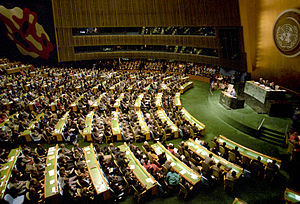 These are not numbered. According to the General Assembly website, the most important[25] are:

Other committees of the General Assembly are enumerated.[26]

There are six commissions:

Despite its name, the former United Nations Commission on Human Rights (UNCHR) was actually a subsidiary body of ECOSOC.

There are seven boards which are categorized into two groups: a) Executive Boards and b) Boards

The newest council is the United Nations Human Rights Council, which replaced the aforementioned UNCHR in March 2006.

There are a total of four councils and one panel.[27]

Working Groups and other

There is a varied group of working groups and other subsidiary bodies.[27]

On 21 March 2005, Secretary-General Kofi Annan presented a report, In Larger Freedom, that criticized the General Assembly for focusing so much on consensus that it was passing watered-down resolutions reflecting "the lowest common denominator of widely different opinions." He also criticized the Assembly for trying to address too broad an agenda, instead of focusing on "the major substantive issues of the day, such as international migration and the long-debated comprehensive convention on terrorism". Annan recommended streamlining the General Assembly's agenda, committee structure, and procedures; strengthening the role and authority of its president; enhancing the role of civil society; and establishing a mechanism to review the decisions of its committees, in order to minimize unfunded mandates and micromanagement of the United Nations Secretariat. Annan reminded UN members of their responsibility to implement reforms, if they expect to realize improvements in UN effectiveness.[28]

The reform proposals were not taken up by the United Nations World Summit in September 2005. Instead, the Summit solely affirmed the central position of the General Assembly as the chief deliberative, policymaking and representative organ of the United Nations, as well as the role of the Assembly in the process of standard-setting and the codification of international law. The Summit also called for strengthening the relationship between the General Assembly and the other principal organs to ensure better coordination on topical issues that required coordinated action by the United Nations, in accordance with their respective mandates.[citation needed]

A United Nations Parliamentary Assembly, or United Nations People's Assembly (UNPA), is a proposed addition to the United Nations System that eventually could allow for direct election of UN parliament members by citizens all over the world.

In the General Debate of the 65th General Assembly, Jorge Valero, representing Venezuela, said "The United Nations has exhausted its model and it is not simply a matter of proceeding with reform, the twenty-first century demands deep changes that are only possible with a rebuilding of this organisation." He pointed to the futility of resolutions concerning the Cuban embargo and the Middle East conflict as reasons for the UN model having failed. Venezuela also called for the suspension of veto rights in the Security Council because it was a "remnant of the Second World War [it] is incompatible with the principle of sovereign equality of States."[29]

Reform of the United Nations General Assembly includes proposals to change the powers and composition of the U.N. General Assembly. This could include, for example, tasking the UNGA with evaluating how well member states implement UNGA resolutions,[30] increasing the power of the assembly vis-à-vis the United Nations Security Council, or making debates more constructive and less repetitive.[31]