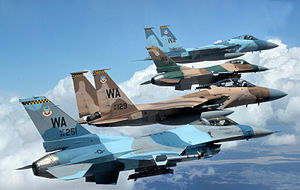 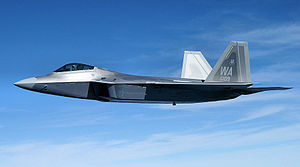 The first F-22A assigned to the USAFWC 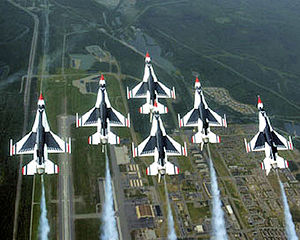 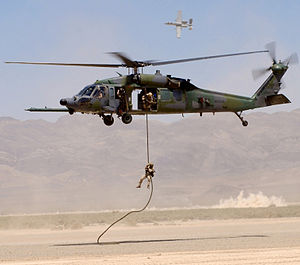 An HH-60G Pave Hawk retrieves a pararescueman as an A-10 Thunderbolt II provides cover fire during a firepower demonstration on the Nellis bombing range.

The United States Air Force Warfare Center manages advanced pilot training and integrates many of the Air Force's test and evaluation requirements. It was established in 1966 as the USAF Tactical Fighter Weapons Center which concentrated on the development of forces and weapons systems that were specifically geared to tactical air operations in conventional (non-nuclear) war and contingencies. It continued to perform this mission for nearly thirty years, undergoing several name changes in the 1990s. In 1991, the center became the USAF Fighter Weapons Center, and then the USAF Weapons and Tactics Center in 1992.[3]

The Air Warfare Center uses the lands on Nellis Air Force Range Complex – which occupies about three million acres (12,000 km²) of land, the largest such range in the United States, and another five-million-acre (20,000 km²) military operating area which is shared with civilian aircraft. The center also uses Eglin AFB, FL, range, which adds even greater depth to the center's capabilities, providing over water and additional electronic expertise to the center.[3]

The Air Warfare Center oversees operations of the 57th Wing, the NTTR, and the 99th Air Base Wings at Nellis AFB, Nevada; the 53rd Wing at Eglin AFB, Florida (with Geographically Separated Units at Tyndall AFB, Florida and Holloman AFB, New Mexico); and the 505th Command and Control Wing at Hurlburt Field, Florida.[3]

The 53d Wing serves as the focal point for the combat air forces in electronic combat, armament and avionics, chemical defense, reconnaissance, command and control, and aircrew training devices.

The 57th Wing is responsible for a variety of activities, such as Red Flag, which provides realistic training in a combined air, ground and electronic threat environment for U.S. and allied forces. It is also the parent unit for both the USAF Weapons School (USAFWS) and the USAF Air Demonstration Squadron, the latter better known as the United States Air Force Thunderbirds.

The 99th Air Base Wing is the host wing at Nellis AFB and manages the day-to-day operations of the base.

The 505 CCW is dedicated to improving warfighter readiness through integrated training, tactics, and testing for operational-level command and control of air, space, and cyber power. It hosts the Air Force's only Air Operations Center Formal Training Unit (FTU).[3]

By the mid-1960s, USAF aircraft and aircrew losses in the Vietnam War had convinced Tactical Air Command (TAC) of the need to improve technical and operational skills for the widening conflict. TAC established the Tactical Fighter Weapons Center at Nellis Air Force Base, Nevada in 1966 for the expressed purpose of improving fighter operations and tactics. Nellis AFB had been referred to as the "Home of the Fighter Pilot" since the Korean War period of the early 1950s, and had a long history of conducting postgraduate fighter training and operational testing and evaluation of fighter weapons systems. Additionally, the Nellis Range, largest in the free world, readily complemented the new center's mission.

Operational units assigned to the USAFWC have been:[4]