USA Hockey (known until June 1991 as the Amateur Hockey Association of the United States or AHAUS) is recognized by the International Olympic Committee and the United States Olympic Committee as the governing body for organized amateur ice hockey in the United States and is a member of the International Ice Hockey Federation. Founded on Oct. 29, 1937, in New York City, New York, the organization is based in Colorado Springs, Colorado, and has a total membership exceeding one million. Its mission is to promote the growth of hockey in America and provide the best possible experience for all participants by encouraging, developing, advancing and administering the sport.

USA Hockey programs support and develop players, coaches, officials, and facilities. In January 2009, the organization launched the American Development Model, which - for the first time ever - provided associations nationwide with a blueprint for optimal athlete development. USA Hockey also has junior and adult hockey programs that provide opportunities for players of all ability levels. In addition, the organization supports a disabled hockey program.

USA Hockey provides certification programs for coaches and officials to ensure education standards are met that coincide with the level of play. A large focus is put on parent education with equipment needs, rules of the game and parental roles in youth sports among common topics.

Members of the organization receive a subscription to USA Hockey Magazine. At 412,892 subscribers,[2] it is the most widely circulated hockey publication in the world. Members also receive insurance coverage and access to participate in national championships and player development camps.

USA Hockey also operates the National Team Development Program, based in Plymouth, Michigan. The program's goal is to prepare student-athletes under the age of 18 for participation on U.S. national teams and continued success throughout their future hockey careers. The NTDP consists of two teams; the U.S. National Under-18 Team, and the U.S. National Under-17 Team.[3] The teams compete in the United States Hockey League in addition to playing NCAA colleges and in International competition. Until 2009, the NTDP competed in the North American Hockey League. Numerous NTDP alumni have gone on to play in the NHL. In the 2012-13 season, 60 former NTDP players suited up for NHL teams. In the 2006 NHL Entry Draft, six first-round selections (including no. 1 pick Erik Johnson) were former members of the NTDP. In 2007, four NTDP members were selected in the first round, with Patrick Kane and James van Riemsdyk going 1st and 2nd overall respectively. Through 2013, some 228 NTDP players had been selected in the NHL Entry Draft. The NTDP plays home games at USA Hockey Arena.

USA Hockey has divided its control into geographical youth districts as follows: 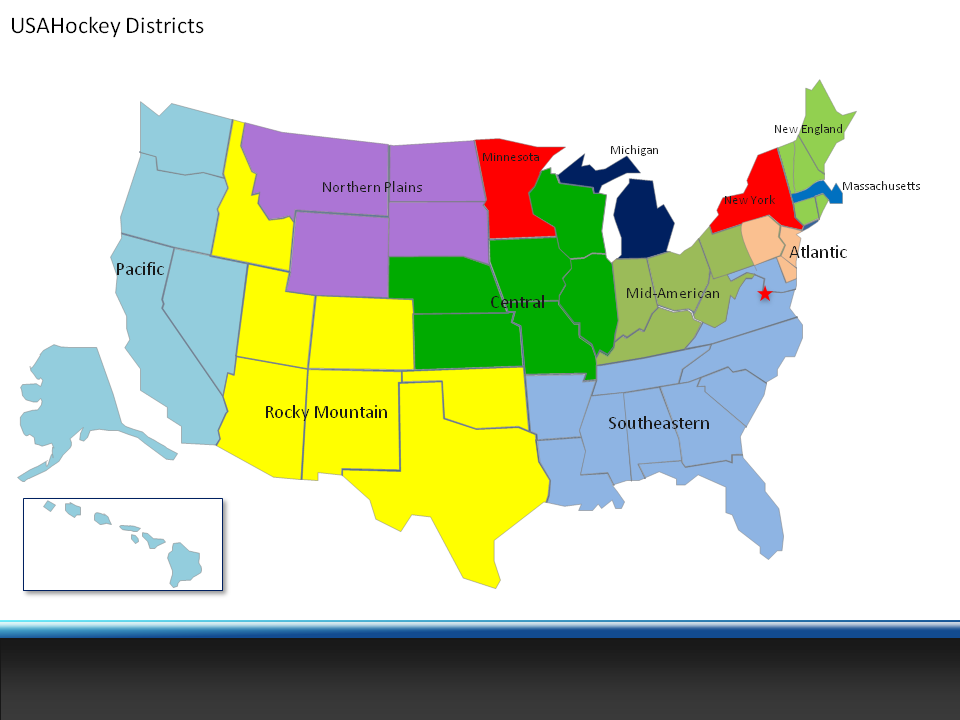