The United States Army Civil Affairs and Psychological Operations Command (Airborne), or USACAPOC(A), was founded in 1985. USACAPOC(A) is composed mostly of U.S. Army Reserve soldiers in units throughout the United States. Its total size is approximately 10,000 soldiers, making up about 94 percent of the DoD's Civil Affairs forces and 71 percent of the DoD's Psychological Operations forces. It is headquartered at Fort Bragg, North Carolina.[1] The current commander (2014) is Major General Daniel R. Ammerman, who assumed command in June 2014.

Army Reserve Civil Affairs and Psychological Operations make up 5 percent of the U.S. Army Reserve force, but account for about 20 percent of Army Reserve deployments. The command's soldiers bring civilian expertise not found among regular active duty soldiers. The projects they coordinate comprise many of the 'Good News' stories run in the American media each day about Iraq, Afghanistan and the Horn of Africa.[citation needed]

Civil Affairs units are the field commander's link to the civil authorities in that commander's area of operations. The soldiers make up teams which interface and provide expertise to the host nation government. USACAPOC(A)'s Civil Affairs soldiers are particularly suited for this mission since they are Army Reserve soldiers with civilian occupations such as law enforcement, engineering, medicine, law, banking, public administration, etc.

Civil Affairs soldiers have been integral to U.S. peacekeeping operations in Iraq, Afghanistan, the Horn of Africa, Bosnia and Kosovo, among others. Tactical Civil Affairs teams go out and meet with local officials, conduct assessments and determine the need for critical infrastructure projects such as roads, schools, power plants, clinics, sewer lines, etc., and check up on the status of the project after construction by a local company has begun. 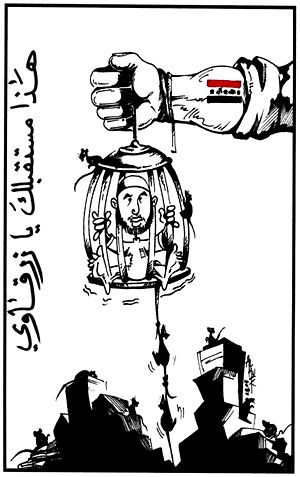 CAPOC pamphlet disseminated in Iraq. The text translates as, "This is your future al-Zarqawi," and depicts al-Qaeda terrorist al-Zarqawi caught in a rat trap. The arm holding up the trap has the Iraqi flag on it.

Used during peacetime, contingencies and declared war, these activities are not forms of force, but are force multipliers that use nonviolent means in often violent environments. Persuading rather than compelling physically, they rely on logic, fear, desire, or other mental factors to promote specific emotions, attitudes, or behaviors. The ultimate objective of U.S. military psychological operations is to convince enemy, neutral, and friendly nations and forces to take action favorable to the U.S. and its allies.

Operational psychological operations are conducted on a smaller scale. They are employed by theater commanders to target groups within the theater of operations. Their purpose can range from gaining support for U.S. operations to preparing the battlefield for combat.

Tactical psychological operations are more limited, used by commanders to secure immediate and near-term goals. In this environment, these force-enhancing activities serve as a means to lower the morale and efficiency of enemy forces.

In addition to supporting commanders, PSYOP units provide interagency support to other U.S. government agencies. In operations ranging from humanitarian assistance to drug interdiction, psychological operations enhance the impact of those agencies' actions. Their activities can be used to spread information about ongoing programs and to gain support from the local populace.

Psychological operations units in the U.S. Army Reserve are language and culturally oriented. Seventy one percent of the Department of Defense's PSYOP capability rests within USACAPOC (A)'s 2nd and 7th Psychological Operations Groups located in Ohio and California respectively.