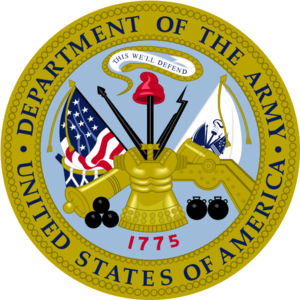 The first use of Army branch insignia was adopted just prior to the American Civil War in 1858 for use on the black felt hat. A system of branch colors, indicated by piping on uniforms of foot soldiers and lace for mounted troops, was first authorized in the 1851 uniform regulations, with Prussian blue denoting infantry, scarlet for artillery, orange for dragoons, green for mounted rifles, and black for staff. When the U.S. Army began developing a series of colored rank epaulets for wear by officers of various Army branches, the scheme included yellow for cavalry officers, red for artillery officers, and light blue or white for infantry officers. General officers wore dark blue epaulets.

By the start of the 20th century, Army personnel began wearing various branch insignia on the stand-up collars of the Army dress uniform. Branch insignia was also worn by officers on the wool uniform shirt when worn as outerwear. Enlisted soldiers wore a version enclosed in a brass disk while officers wore a full sized version not enclosed. This has continued to the modern age.

Members of Infantry, Armor (including Cavalry), Special Forces, Aviation, Engineer, Field Artillery and Air Defense Artillery regiments may wear a version of the insignia in which the regimental number is included in the insignia. For Air Defense Artillery and Aviation, the number is mounted on the center of the face. For Infantry, Cavalry, Special Forces and Field Artillery, the number is placed immediately above, but not covering, the intersection of the crossed rifles, sabres, arrows, or cannon, respectively. For Armor, the number is placed immediately above the tank.[2]

Branch insignia for Soldiers not affiliated with an infantry, armor, field artillery, air defense artillery, cavalry, special forces, or aviation regiment, generally wear their assigned basic branch insignia; however, as an option, Soldiers who are not affiliated with one of the above regiments, but who are assigned to a color-bearing regiment or separate operational battalion of their branch, may wear their branch insignia with the numerical designation of the battalion or regiment affixed, when approved by the Army Command (ACOM) commander, Army Service Component Command commander, or Army Direct Reporting Unit commander.[2] Officers and enlisted personnel assigned to cavalry regiments, cavalry squadrons, or separate cavalry troops are authorized to wear cavalry collar insignia in lieu of the branch insignia, when approved by the ACOM commander.[3]

Certain special assignment insignia is worn in place of branch insignia to denote the officer's or NCO's particular responsibility. The enlisted versions of these are borne on a golden disk in the same manner as their customary branch device. Officers so assigned continue to wear their basic branch color(s) on the epaulets of the blue Army Service Uniform and the Army Blue Mess uniform.

The following are the currently used branch insignia emblems of the United States Army:

Although not considered a branch of service, U.S. Army Officers assigned as aides to flag or equivalent grade officers replace their branch of service insignia for a special aide-de-camp insignia that denote the grade or position of the officer the aide supports. Because these collar insignia are branch immaterial, officers continue to wear their original branch of service colors and Army Regimental System insignia.

The following insignia are no longer used: