The United States Australian Football League (USAFL) is a governing body for Australian rules football in the United States. It was conceived in 1996 and organized in 1997. It is based in Sun Prairie, Wisconsin. 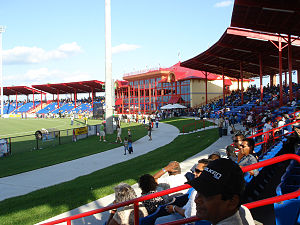 CRBR Park Stadium is the largest purpose built cricket/Australian football ground in the United States. It has a capacity of 20,000.

The first match between two local US clubs was played in 1996 between Cincinnati and Louisville.[3] In the first year the Mid American Australian Football League was formed. Many of the local players had found out about the game in the 1980s on television and ESPN. Although the local game grew, ESPN no longer broadcast AFL matches, and in response the lobby group, Australian Football Association of North America was formed.

In 1997, the first club national championships were held in Cincinnati. Nashville hosted the first Australian Grand Final Festival in the same year. The United States Australian Football League (USAFL) was formed in 1997 to govern the code in the country.

The involvement of many well-known Australians has helped boost the relations between the USAFL and AFL. In the early days, Paul Roos was a key figure.

USAFL is responsible for the co-ordination of the National Teams, the USA Revolution men's team and the USA Freedom women's team. The team plays in international tournaments and exhibition matches against other countries. National team players are selected from the best US-born players from the club teams across the country.

With close proximity to Canada, the Revolution & Freedom participate in the annual 49th Parallel Cup against Canada each year except for years of the International Cup in Australia.