On January 25, 2010, Census Bureau Director Robert Groves personally inaugurated the 2010 Census enumeration by counting World War II veteran Clifton Jackson, a resident of Noorvik, Alaska.[6] Census forms were delivered by the U.S. Post Office beginning March 15, 2010. The number of forms mailed out or hand-delivered by the Census Bureau was approximately 134 million.[7] Although the questionnaire used April 1, 2010 as the reference date as to where a person was living, an insert dated March 15, 2010 included the following printed in bold type: "Please complete and mail back the enclosed census form today."

The 2010 Census national mail participation rate was 74%.[8] From April through July 2010, census takers visited households that did not return a form, an operation called "non-response follow-up" (NRFU). 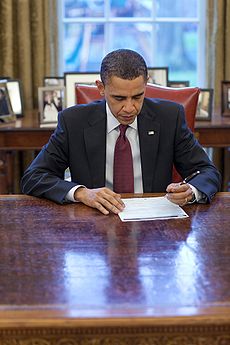 President Obama completing his census form in the Oval Office on March 29, 2010.

In December 2010, the Census Bureau delivered population information to the president for apportionment, and in March 2011, complete redistricting data was delivered to states.[1]

Personally identifiable information will be available in 2082.[9]

The Census Bureau did not use a long form for the 2010 Census.[10] In several previous censuses, one in six households received this long form, which asked for detailed social and economic information. The 2010 Census used only a short form asking ten basic questions:[10]

The form included space to repeat some or all of these questions for up to twelve residents total.

In contrast to the 2000 census, an Internet response option was not offered, nor was the form available for download.[10][11]

Detailed socioeconomic information collected during past censuses will continue to be collected through the American Community Survey.[11] The survey provides data about communities in the United States on a 1-year or 3-year cycle, depending on the size of the community, rather than once every 10 years. A small percentage of the population on a rotating basis will receive the survey each year, and no household will receive it more than once every five years.[12]

The 2010 census cost $13 billion, approximately $42 per capita; by comparison, the 2010 census per-capita cost for China was about US$1 and for India was US$0.40.[14] Operational costs were $5.4 billion, significantly under the $7 billion budget.[15] In December 2010 the Government Accountability Office (GAO) noted that the cost of conducting the census has approximately doubled each decade since 1970.[14] In a detailed 2004 report to Congress, the GAO called on the Census Bureau to address cost and design issues, and at that time, had estimated the 2010 Census cost to be $11 billion.[16]

In August 2010, Commerce Secretary Gary Locke announced that the census operational costs came in significantly under budget; of an almost $7 billion operational budget:[15]

Locke credited the management practices of Census Bureau director Robert Groves, citing in particular the decision to buy additional advertising in locations where responses lagged, which improved the overall response rate. The agency also has begun to rely more on questioning neighbors or other reliable third parties when a person could not be immediately reached at home, which reduced the cost of follow-up visits. Census data for about 22% of U.S. households that did not reply by mail were based on such outside interviews, Groves said.[15]

In 2005, Lockheed Martin won a six-year, $500 million contract to capture and standardize data for the census. The contract included systems, facilities, and staffing.[17] Information technology was about a quarter of the projected $11.3 billion cost of the decennial census.[18] The use of high-speed document scanning technology, such as ImageTrac scanners developed by IBML, helped Lockheed Martin complete the project on schedule and under budget.[19] This was the first census to use hand-held computing devices with GPS capability, although they were only used for the address canvassing operation. The Census Bureau chose to conduct the primary operation, Non-Response Follow Up (NRFU), without using the handheld computing devices.[20][21]

Due to allegations surrounding previous censuses that poor people and people of color are routinely undercounted, for the 2010 census, the Census Bureau tried to avoid that bias by enlisting tens of thousands of intermediaries, such as churches, charities and firms, to explain to people the importance of being counted.[7]

In April 2009, the Census Bureau announced that it intended to work with community organizations in an effort to count all illegal immigrants in the United States for the census.[22]

The Association of Community Organizations for Reform Now (ACORN) was given a contract to help publicize the importance of the census count and to encourage individuals to fill out their forms. In September 2009, after controversial undercover videos showing four ACORN staffers giving tax advice to a man and a woman posing as a prostitute, the Bureau canceled ACORN's contract.[23] Various American celebrities, including Demi Lovato and Eva Longoria,[24] were used in public service announcements targeting younger people to fill out census forms. Wilmer Valderrama and Rosario Dawson have helped spread census awareness among young Hispanics, a historically low participating ethnicity in the U.S. Census.[25] Rapper Ludacris also participated in efforts to spread awareness of the 2010 Census.[26]

The Census Bureau hired about 635,000 people to find those U.S. residents who had not returned their forms by mail; as of May 28, 2010, 113 census workers had been victims of crime while conducting the census.[3][needs update] As of June 29, there were 436 incidents involving assaults or threats against enumerators, more than double the 181 incidents in 2000; one enumerator, attempting to hand-deliver the census forms to a Hawaii County police officer, was arrested for trespassing – the officer's fellow policemen made the arrest.[2]

Some political conservatives and libertarians questioned the validity of the questions and even encouraged people to refuse to answer questions for privacy and constitutional reasons.[27] Michele Bachmann, a conservative Republican Representative from Minnesota, stated that she would not fill out her census form other than to indicate the number of people living in her household because "the Constitution doesn't require any information beyond that."[28] Former Republican Representative and Libertarian presidential candidate Bob Barr stated that the census has become too intrusive, going beyond the mere enumeration (i.e., count) intended by the framers of the U.S. Constitution.[29] According to political commentator Juan Williams, "Census participation rates have been declining since 1970, and if conservatives don't participate, doubts about its accuracy and credibility may become fatal."[27]

As a result, the Census Bureau undertook an unprecedented advertising campaign targeted at encouraging white political conservatives to fill out their forms, in the hope of avoiding an undercount of this group. The 2010 U.S. Census was the primary sponsor at NASCAR races in Atlanta, Bristol, and Martinsville, and sponsored the No. 16 Ford Fusion driven by Greg Biffle for part of the season, because of a marketing survey that indicated most NASCAR fans lean politically conservative.[27] It also ran an advertisement during the 2010 Super Bowl, and hired singer Marie Osmond, who is thought to have many conservative fans, to publicize the census.[27]

File:HouseDelegations2013-23.svg
The 435 seats of the House grouped by state, as apportioned after the 2010 Census

The results of the 2010 census determined the number of seats that each state receives in the United States House of Representatives starting with the 2012 elections. Consequently, this affected the number of votes each state has in the Electoral College for the 2012 presidential election.

Because of population changes, eighteen states had changes in their number of seats. Eight states gained at least one seat, and ten states lost at least one seat. The final result involved 12 seats being switched.[30]

Some objected to the counting of persons who are in the United States illegally.[31][32] Republican senators David Vitter and Bob Bennett tried unsuccessfully to add questions on immigration status to the census form.[7]

Organizations such as the Prison Policy Initiative argued that the census counts of incarcerated men and women as residents of prisons, rather than of their pre-incarceration addresses, skewed political clout and resulted in misleading demographic and population data.[33]

The term "Negro" was used in the questionnaire as one of the options for African Americans (Question 9. What is Person (number)'s race? ... Black, African Am., or Negro) as a choice to describe one's race. Census Bureau spokesman Jack Martin explained that "many older African-Americans identified themselves that way, and many still do. Those who identify themselves as Negroes need to be included."[34][35] The word was also used in the 2000 Census, with over 56,000 people identifying themselves as "Negro."[36]

The 2010 census contained ten questions about age, gender, ethnicity, home ownership, and household relationships. Six of the ten questions were to be answered for each individual in the household. Federal law has provisions for fining those who refuse to complete the census form.[37]

Detroit Mayor Dave Bing held a press conference on March 22, 2011 to announce that the city would challenge its census results.[38] The challenge, being led by the city's planning department, cited an inconsistency as an example showing a downtown census tract which lost only 60 housing units, but 1,400 people, implying that a downtown jail or dormitory was missed in canvassing.[39]

New York City Mayor Michael Bloomberg held a conference on March 27, 2011, to announce that the city would also challenge his city's census results, specifically the apparent undercounting in the boroughs of Queens and Brooklyn.[40] Bloomberg said that the numbers for Queens and Brooklyn, the two most populous boroughs, are implausible.[41] According to the Census, they grew by only 0.1% and 1.6%, respectively, while the other boroughs grew by between 3% and 5%. He also stated that the census showed improbably high numbers of vacant housing in vital neighborhoods such as Jackson Heights, Queens.

The District of Columbia announced in August 2011 that it would also challenge its census results. The Mayor's Office claimed that the detailed information provided for 549 census blocks is "nonsensical", listing examples of census data that show housing units located in the middle of a street that do not actually exist. However, officials do not believe the city's total population will drastically change as a result of the challenge.[42]

A 2009 lawsuit, Clemons v. Department of Commerce (see also United States congressional apportionment#Controversy and history), sought a court order for Congress to reapportion the House of Representatives with a greater number of members following the census, to rectify under- and over-representation of some states under the so-called 435 rule established by the Apportionment Act of 1911, which limits the number of U.S. Representatives to that number, meaning that some states are slightly underrepresented proportionate to their true population and that others are slightly overrepresented by the same standard.[clarification needed] Had this occurred, it would have also affected Electoral College apportionment for the 2012–2020 presidential elections.[43] After the court order was not granted, the plaintiffs appealed the case to the United States Supreme Court, and on December 13, 2010, the Supreme Court vacated and remanded with instructions to dismiss the complaint for lack of jurisdiction.[44]

See also: List of U.S. states and territories by population

These are core metropolitan rankings versus combined statistical areas. For full list with current data, go to Metropolitan Statistics.

Metro rankings are more pertinent to determine economic strength of an area. However, city rankings are also included below.