United States Court of Appeals for the Fourth Circuit

The United States Court of Appeals for the Fourth Circuit (in case citations, 4th Cir.) is a federal court located in Richmond, Virginia, with appellate jurisdiction over the district courts in the following districts: 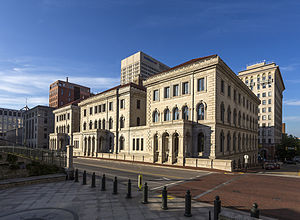 The court has fifteen seats for active judges, numbered in the order in which they were filled. Judges who retire into senior status remain on the bench but leave their seat vacant. That seat is filled by the next circuit judge appointed by the president.

Practice in the 4th Circuit

The Fourth is the most efficient circuit, taking an average of just over seven months to resolve each appeal. From 2000 to 2008, the Court had the highest rate of non-publication (92%) on the Federal Circuit.[5]

The Chief Justice is always assigned to the Fourth Circuit as the circuit advisory justice, due to Richmond's close proximity to Washington, D.C.