United States Court of Appeals for the Ninth Circuit

The United States Court of Appeals for the Ninth Circuit (in case citations, 9th Cir.) is a U.S. Federal court with appellate jurisdiction over the district courts in the following districts:

It also has appellate jurisdiction over the following territorial courts:

Headquartered in San Francisco, California, the Ninth Circuit is by far the largest of the thirteen courts of appeals, with 29 active judgeships. The court's regular meeting places are Seattle at the William K. Nakamura Courthouse, Portland at the Pioneer Courthouse, San Francisco at the James R. Browning U.S. Court of Appeals Building, and Pasadena at the Richard H. Chambers U.S. Court of Appeals. Panels of the court occasionally travel to hear cases in other locations within the circuit. Although the judges travel around the circuit, the court arranges its hearings so that cases from the northern region of the circuit are heard in Seattle or Portland, cases from southern California are heard in Pasadena, and cases from northern California, Nevada, Arizona, and Hawaii are heard in San Francisco. For lawyers who must come and present their cases to the court in person, this administrative grouping of cases helps to reduce the time and cost of travel. 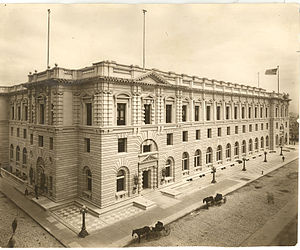 The large size of the current court is due to the fact that both the population of the western states and the geographic jurisdiction of the Ninth Circuit have increased dramatically since the U.S. Congress created the United States Court of Appeals for the Ninth Circuit in 1891. The court was originally granted appellate jurisdiction over federal district courts in California, Idaho, Montana, Nevada, Oregon, and the State of Washington. As new states and territories were added to the federal judicial hierarchy in the twentieth century, many of those in the West were placed in the Ninth Circuit: the newly acquired Territory of Hawaii in 1900, Arizona upon its admission to the Union in 1912, the Territory of Alaska in 1948, Guam in 1951, and the Commonwealth of the Northern Mariana Islands in 1977.

In 1979, the Ninth Circuit became the first federal judicial circuit to set up a Bankruptcy Appellate Panel as authorized by the Bankruptcy Reform Act of 1978. 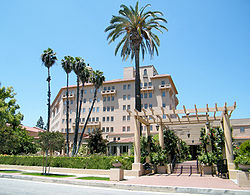 The cultural and political jurisdiction of the Ninth Circuit is just as varied as the land within its geographical borders. In a dissenting opinion in a rights of publicity case involving the Wheel of Fortune star Vanna White, Circuit Judge Alex Kozinski sardonically noted that "[f]or better or worse, we are the Court of Appeals for the Hollywood Circuit."[3] Judges from more remote parts of the circuit note the contrast between legal issues confronted by populous states such as California and those confronted by rural states such as Alaska, Idaho, Montana, and Nevada.

Judge Andrew J. Kleinfeld, who maintains his judicial chambers in Fairbanks, Alaska, wrote in a letter in 1998: "Much federal law is not national in scope . . . . It is easy to make a mistake construing these laws when unfamiliar with them, as we often are, or not interpreting them regularly, as we never do."[4]

According to the most current count, the Ninth Circuit has the highest percentage (68%) of sitting judges appointed by Democratic presidents. Republicans argue the court is biased because of its relatively high proportion of Democratic appointees.[5]

Others argue the court's high percentage of reversals is illusory, resulting from the circuit hearing more cases than the other circuits. This results in the Supreme Court reviewing a smaller proportion of its cases, letting stand the vast majority of its cases.[6][7]

However, through 2008, the Ninth Circuit Court's rulings reviewed by the Supreme Court were affirmed only 20% of the time and reversed and or vacated 80% of the time; a rate substantially higher than the median reversal rate of 68.29% for the same period.[8] 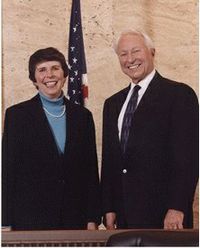 Size of the court

Critics of the Ninth Circuit claim there are several adverse consequences of its large size.[9] Chief among these is the Ninth Circuit's unique rules concerning the composition of an en banc court. In other circuits, en banc courts are composed of all active circuit judges, plus (depending on the rules of the particular court) any senior judges who took part in the original panel decision. By contrast, in the Ninth Circuit it is impractical for 29 or more judges to take part in a single oral argument and deliberate on a decision en masse. The court thus provides for a “limited en banc review of a randomly selected 11 judge panel. This means that en banc reviews may not actually reflect the views of the majority of the court and indeed may not include any of the three judges involved in the decision being reviewed in the first place. The result, according to detractors, is a high risk of intracircuit conflicts of law where different groupings of judges end up delivering contradictory opinions. That is said to cause uncertainty in the district courts and within the bar. However, en banc review is a relatively rare occurrence in all circuits and Ninth Circuit rules provide for full en banc review in limited circumstances.[10]

All recently proposed splits would leave at least one circuit with 21 judges, only two fewer than the 23 that the Ninth Circuit had when the limited en banc procedure was first adopted. In other words, after a split at least one of the circuits would still be using limited en banc courts.[11]

In March 2007, Associate Justices Anthony Kennedy and Clarence Thomas testified before a House Appropriations subcommittee that the consensus among the justices of the Supreme Court of the United States was that the Ninth Circuit was too large and unwieldy and should be split.[12]

The court has 29 seats for active judges, numbered in the order in which they were filled. Judges who retire into senior status remain on the bench but leave their seat vacant. That seat is filled by the next circuit judge appointed by the president.