The United States Department of Energy (DOE) is a Cabinet-level department of the United States Government concerned with the United States' policies regarding energy and safety in handling nuclear material. Its responsibilities include the nation's nuclear weapons program, nuclear reactor production for the United States Navy, energy conservation, energy-related research, radioactive waste disposal, and domestic energy production. It also directs research in genomics; the Human Genome Project originated in a DOE initiative.[3] DOE sponsors more research in the physical sciences than any other U.S. federal agency, the majority of which is conducted through its system of National Laboratories.[4]

The agency is administered by the United States Secretary of Energy, and its headquarters are located in Southwest Washington, D.C., on Independence Avenue in the James V. Forrestal Building, named for James Forrestal, as well as in Germantown, Maryland.

Former Governor of Texas Rick Perry is the current Secretary of Energy. He was confirmed by a 62 to 37 vote in the United States Senate on March 2, 2017.[5]

In 1942, during World War II, the United States started the Manhattan Project, a project to develop the atomic bomb, under the eye of the U.S. Army Corps of Engineers. After the war in 1946, the Atomic Energy Commission (AEC) was created to control the future of the project.[6][7]

The 1973 oil crisis called attention to the need to consolidate energy policy. On August 4, 1977, President Jimmy Carter signed into law The Department of Energy Organization Act of 1977 (Pub.L. 95–91, 91 Stat. 565, enacted August 4, 1977), which created the Department of Energy.[8] The new agency, which began operations on October 1, 1977, consolidated the Federal Energy Administration, the Energy Research and Development Administration, the Federal Power Commission, and programs of various other agencies. Former Secretary of Defense James Schlesinger, who served under Presidents Nixon and Ford during the Vietnam War, was appointed as the first secretary.

On March 28, 2017 a supervisor in the Office of International Climate and Clean Energy asked staff to avoid the phrases "climate change," "emissions reduction," or "Paris Agreement" in written memos, briefings or other written communication. A DOE spokesperson denied that phrases had been banned.[9][10]

In December 1999, the FBI was investigating how China obtained plans for a specific nuclear device. Wen Ho Lee was accused of stealing nuclear secrets from Los Alamos National Laboratory for the People's Republic of China. Federal officials, including then-Energy Secretary Bill Richardson, publicly named Lee as a suspect before he was charged with a crime. The U. S. Congress held hearings to investigate the Department of Energy's mishandling of his case. Republican senators thought that an independent agency should be in charge of nuclear weapons and security issues, not the Department of Energy.[11] All but one of the 59 charges against Lee were eventually dropped because the investigation finally proved that the plans the Chinese obtained could not have come from Lee. Lee filed suit and won a $1.6 million settlement against the federal government and news agencies.[12]

The Department of Energy operates a system of national laboratories and technical facilities for research and development agency, as follows:

Other major DOE facilities include:

The DOE/NNSA has federal responsibility for the design, testing and production of all nuclear weapons. NNSA in turn uses contractors to carry out its responsibilities at the following government owned sites: 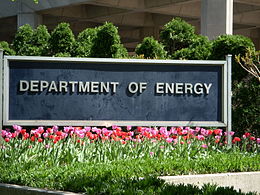 Sign in front of the United States Department of Energy Forrestal Building on 1000 Independence Avenue in Washington D.C.

President Barack Obama unveiled on May 7, 2009, a $26.4 billion budget request for DOE for fiscal year (FY) 2010, including $2.3 billion for the DOE Office of Energy Efficiency and Renewable Energy (EERE). The budget aims to substantially expand the use of renewable energy sources while improving energy transmission infrastructure. It also makes significant investments[clarification needed] in hybrids and plug-in hybrids, in smart grid technologies, and in scientific research and innovation.[14]

As part of the $789 billion economic stimulus package in the American Recovery and Reinvestment Act of 2009, Congress provided Energy with an additional $38.3 billion for fiscal years 2009 and 2010, adding about 75 percent to Energy's annual budgets. Most of the stimulus spending was in the form of grants and contracts.

For fiscal year 2013, each of the operating units of the Department of Energy operated with the following budgets:[15]

Energy Savings Performance Contracts (ESPCs) are contracts under which a contractor designs, constructs, and obtains the necessary financing for an energy savings project, and the federal agency makes payments over time to the contractor from the savings in the agency's utility bills. The contractor guarantees the energy improvements will generate savings, and after the contract ends, all continuing cost savings accrue to the federal agency.[16]

Title XVII of Energy Policy Act of 2005 authorizes the DOE to issue loan guarantees to eligible projects that "avoid, reduce, or sequester air pollutants or anthropogenic emissions of greenhouse gases" and "employ new or significantly improved technologies as compared to technologies in service in the United States at the time the guarantee is issued".[17]

Energy Innovation Hubs are multi-disciplinary meant to advance highly promising areas of energy science and technology from their early stages of research to the point that the risk level will be low enough for industry to commercialize the technologies.[14] The Consortium for Advanced Simulation of Light Water Reactors (CASL) was the first DOE Energy Innovation Hub established in July 2010, for the purpose of providing advanced modeling and simulation (M&S) solutions for commercial nuclear reactors.

The DOE budget includes $280 million to fund eight Energy Innovation Hubs, each of which is focused on a particular energy challenge. Two of the eight hubs are included in the EERE budget and will focus on integrating smart materials, designs, and systems into buildings to better conserve energy and on designing and discovering new concepts and materials needed to convert solar energy into electricity. Another two hubs, included in the DOE Office of Science budget, will tackle the challenges of devising advanced methods of energy storage and creating fuels directly from sunlight without the use of plants or microbes. Yet another hub will develop "smart" materials that will allow the electrical grid to adapt and respond to changing conditions.[14]

In 2012, The DOE awarded $120 million to the Ames Laboratory to start a new EIH, the Critical Materials Institute, which will focus on improving the supply of rare earth elements, which is controlled by China.[19]

Symbolism in the seal

Excerpt from the code of federal regulations, Title 10: Energy[20]

The official seal of the Department of energy "includes a green shield bisected by a gold-colored lightning bolt, on which is emblazoned a gold-colored symbolic sun, atom, oil derrick, windmill, and dynamo. It is crested by the white head of an eagle, atop a white rope. Both appear on a blue field surrounded by concentric circles in which the name of the agency, in gold, appears on a green background."

"The eagle represents the care in planning and the purposefulness of efforts required to respond to the Nation's increasing demands for energy. The sun, atom, oil derrick, windmill, and dynamo serve as representative technologies whose enhanced development can help meet these demands. The rope represents the cohesiveness in the development of the technologies and their link to our future capabilities. The lightning bolt represents the power of the natural forces from which energy is derived and the Nation's challenge in harnessing the forces."

"The color scheme is derived from nature, symbolizing both the source of energy and the support of man's existence. The blue field represents air and water, green represents mineral resources and the earth itself, and gold represents the creation of energy in the release of natural forces. By invoking this symbolism, the color scheme represents the Nation's commitment to meet its energy needs in a manner consistent with the preservation of the natural environment."