United States Department of the Treasury

The first Secretary of the Treasury was Alexander Hamilton, who was sworn into office on September 11, 1789. Hamilton was asked by President George Washington to serve after first having asked Robert Morris (who declined, recommending Hamilton instead). Hamilton almost single-handedly worked out the nation's early financial system, and for several years was a major presence in Washington's administration as well. His portrait is on the obverse of the U.S. ten-dollar bill while the Treasury Department building is shown on the reverse.

Besides the Secretary, one of the best-known Treasury officials is the Treasurer of the United States whose signature, along with the Treasury Secretary's, appears on all Federal Reserve notes.

The Treasury prints and mints all paper currency and coins in circulation through the Bureau of Engraving and Printing and the United States Mint. The Department also collects all federal taxes through the Internal Revenue Service, and manages U.S. government debt instruments.

The establishing act of congress passed in 1789, read in part,

...it shall be the duty of the Secretary of the Treasury ...to execute such services relative to the sale of the lands belonging to the United States, as may be by law required of him; to make report, and give information to either branch of the legislature, in person or in writing (as he may be required), respecting all matters referred to him by the Senate or House of Representatives, or which shall appertain to his office; and generally to perform all such services relative to the finances, as he shall be directed to perform.[2]

(b) The head of the Department is the Secretary of the Treasury. The Secretary is appointed by the President, by and with the advice and consent of the Senate.

President George Washington appointed Alexander Hamilton as the first United States Secretary of the Treasury on September 11, 1789. He left office on the last day of January 1795. Much of the structure of the government of the United States was worked out in those five years, beginning with the structure and function of the cabinet itself.

In the next two years, Hamilton submitted five reports: 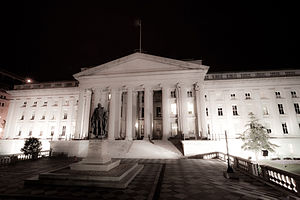 Congress transferred several agencies that had previously been under the aegis of the Treasury department to other departments as a consequence of the September 11, 2001 terrorist attacks. Effective January 24, 2003, the Bureau of Alcohol, Tobacco and Firearms (ATF), which had been a bureau of the Department since 1972, was extensively reorganized under the provisions of the Homeland Security Act of 2002. The law enforcement functions of ATF, including the regulation of legitimate traffic in firearms and explosives, were transferred to the Department of Justice as the Bureau of Alcohol, Tobacco, Firearms, and Explosives (BATFE). The regulatory and tax collection functions of ATF related to legitimate traffic in alcohol and tobacco remained with the Treasury at its new Alcohol and Tobacco Tax and Trade Bureau (TTB). 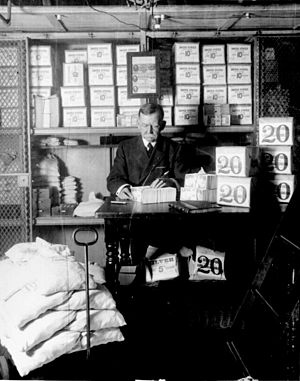 The basic functions of the Department of the Treasury mainly include:[3]

United States Department of the Treasury 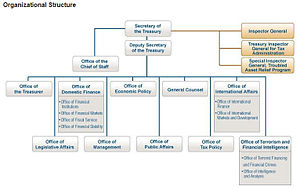 Organization of the U.S. Dept. of the Treasury. 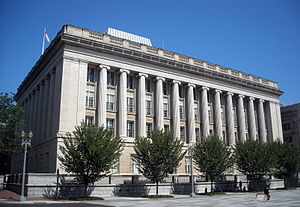 The Office of Foreign Assets Control and the main branch of the Treasury Department Federal Credit Union are located in the Treasury Annex in Washington, D.C. 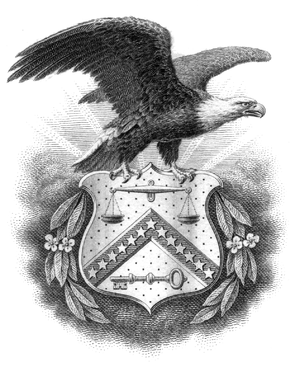 "Eagle and Treasury Seal", made by United States Bureau of Engraving and Printing engraver John Eissler in 1921. The engraving was originally used on official Treasury letterheads.

As part of its administration of federal tax, the Treasury issues a wide range of documents providing its interpretation of the Internal Revenue Code (IRC), which each document having a varying level of weight for which the tax payer may rely: 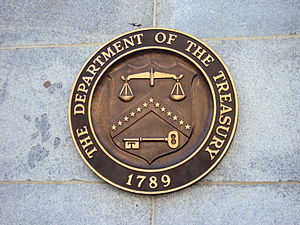 Seal on United States Department of the Treasury on the Building

The Treasury Department was authorized a budget for Fiscal Year 2015 of $22.6 billion. The budget authorization is broken down as follows:[10]