A bureau of the United States Department of the Interior, it is that department's sole scientific agency. The USGS employs approximately 8,670 people[2] and is headquartered in Reston, Virginia. The USGS also has major offices near Lakewood, Colorado, at the Denver Federal Center, and Menlo Park, California.

The current motto of the USGS, in use since August 1997, is "Science for a changing World."[3][4] The agency's previous slogan, adopted on the occasion of its hundredth anniversary, was "Earth Science in the Public Service."[5]

Prompted by a report from the National Academy of Sciences, the USGS was created, by a last-minute amendment, to an act of Congress on March 3, 1879. It was charged with the "classification of the public lands, and examination of the geological structure, mineral resources, and products of the national domain". This task was driven by the need to inventory the vast lands added to the United States by the Louisiana Purchase in 1803 and the Mexican–American War in 1848.

The legislation also provided that the Hayden, Powell, and Wheeler surveys be discontinued as of June 30, 1879.[6]

Clarence King, the first director of USGS, assembled the new organization from disparate regional survey agencies. After a short tenure, King was succeeded in the director's chair by John Wesley Powell. 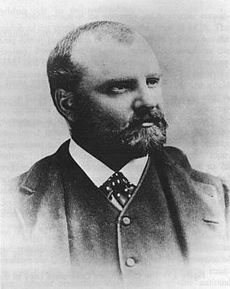 Clarence King, founder of the USGS 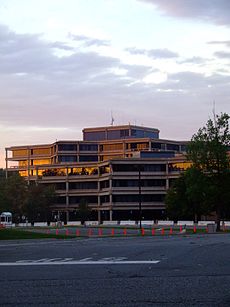 The USGS headquarters in Reston, Virginia 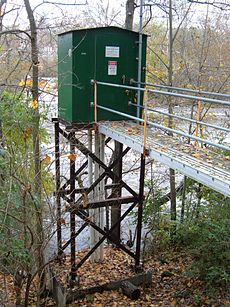 USGS gauging station 03221000 on the Scioto River below O'Shaughnessy Dam near Dublin, Ohio

Earthquake animations from the past 7 days

Recent earthquakes from the past 8–30 days around the world 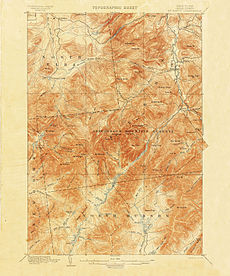 The USGS produces several national series of topographic maps which vary in scale and extent, with some wide gaps in coverage, notably the complete absence of 1:50,000 scale topographic maps or their equivalent. The largest (both in terms of scale and quantity) and best-known topographic series is the 7.5-minute, 1:24,000 scale, quadrangle, a non-metric scale virtually unique to the United States. Each of these maps covers an area bounded by two lines of latitude and two lines of longitude spaced 7.5 minutes apart. Nearly 57,000 individual maps in this series cover the 48 contiguous states, Hawaii, U.S. territories, and areas of Alaska near Anchorage, Fairbanks, and Prudhoe Bay. The area covered by each map varies with the latitude of its represented location due to convergence of the meridians. At lower latitudes, near 30° north, a 7.5-minute quadrangle contains an area of about 64 square miles (166 km2). At 49° north latitude, 49 square miles (127 km2) are contained within a quadrangle of that size. As a unique non-metric map scale, the 1:24,000 scale naturally requires a separate and specialized romer scale for plotting map positions.[23] In recent years, budget constraints have forced the USGS to rely on donations of time by civilian volunteers in an attempt to update its 7.5-minute topographic map series, and USGS stated outright in 2000 that the program was to be phased out in favor of The National Map[24] (not to be confused with the National Atlas of the United States produced by the Department of the Interior, one of whose bureaus is USGS).

An older series of maps, the 15-minute series, was once used to map the contiguous 48 states at a scale of 1:62,500, but was discontinued some time ago for maps covering the continental U.S. Each map was bounded by two parallels and two meridians spaced 15 minutes apart—the same area covered by four maps in the 7.5-minute series. The 15-minute series, at a scale of 1:63,360 (one inch representing one mile), remains the primary topographic quadrangle for the state of Alaska (and only for that particular state). Nearly 3,000 maps cover 97% of the state.[23] The United States remains virtually the only developed country in the world without a standardized civilian topographic map series in the standard 1:25,000 or 1:50,000 metric scales, making coordination difficult in border regions (the U.S. military does issue 1:50,000 scale topo maps of the continental United States, though only for use by members of its defense forces).

The next-smallest topographic series, in terms of scale, is the 1:100,000 series. These maps are bounded by two lines of longitude and two lines of latitude. However, in this series, the lines of latitude are spaced 30 minutes apart and the lines of longitude are spaced 60 minutes, which is the source of another name for these maps; the 30 x 60-minute quadrangle series. Each of these quadrangles covers the area contained within 32 maps in the 7.5-minute series. The 1:100,000 scale series is unusual in that it employs the Metric system primarily. One centimeter on the map represents one kilometer of distance on the ground. Contour intervals, spot elevations, and horizontal distances are also specified in meters.

The final regular quadrangle series produced by the USGS is the 1:250,000 scale topographic series. Each of these quadrangles in the conterminous United States measures 1 degree of latitude by 2 degrees of longitude. This series was produced by the U.S. Army Map Service in the 1950s, prior to the maps in the larger-scale series, and consists of 489 sheets, each covering an area ranging from 8,218 square miles (21,285 km2) at 30° north to 6,222 square miles (16,115 km2) at 49° north.[23] Hawaii is mapped at this scale in quadrangles measuring 1° by 1°.

USGS topographic quadrangle maps are marked with grid lines and tics around the map collar which make it possible to identify locations on the map by several methods, including the graticule measurements of longitude and latitude, the township and section method within the Public Land Survey System, and cartesian coordinates in both the State Plane Coordinate System and the Universal Transverse Mercator coordinate system.

Other specialty maps have been produced by the USGS at a variety of scales. These include county maps, maps of special interest areas, such as the national parks, and areas of scientific interest.

A number of Internet sites have made these maps available on the web for affordable commercial and professional use. Because works of the U.S. government are in the public domain, it is also possible to find many of these maps for free at various locations on the Internet. Georeferenced map images are available from the USGS as digital raster graphics (DRGs) in addition to digital data sets based on USGS maps, notably digital line graphs (DLGs) and digital elevation models (DEMs).

The National Map and U.S. Topo

In 2008 the USGS abandoned traditional methods of surveying, revising, and updating topographic maps based on aerial photography and field checks.[25] Today's U.S. Topo quadrangle (1:24,000) maps are mass-produced, using automated and semiautomated processes, with cartographic content supplied from the National GIS Database.[25] In the two years from June 2009 to May 2011, the USGS produced nearly 40,000 maps, more than 80 maps per work day.[25] Only about two hours of interactive work are spent on each map, mostly on text placement and final inspection; there are essentially no field checks or field inspections to confirm map details.[25]

While much less expensive to compile and produce, the revised digital U.S. topo maps have been criticized for a lack of accuracy and detail in comparison to older generation maps based on aerial photo survey and field checks.[25] As the digital databases were not designed for producing general purpose maps, data integration can be a problem when retrieved from sources with different resolutions and collection dates.[25] Man-made features once recorded by direct field observation are not in any public domain national database, and are frequently omitted from the newest generation digital topo maps, including windmills, mines and mineshafts, water tanks, fence lines, survey marks, parks, recreational trails, buildings, boundaries, pipelines, telephone lines, power transmission lines, and even railroads.[25] Additionally, the digital map's use of existing software may not properly integrate different feature classes or prioritize and organize text in areas of crowded features, obscuring important geographic details.[25] As a result, some have noted that the U.S. Topo maps currently fall short of traditional topographic map presentation standards achieved in maps drawn from 1945 to 1992.[25]

The HIF was given national responsibility for the design, testing, evaluation, repair, calibration, warehousing, and distribution of hydrologic instrumentation. Distribution is accomplished by direct sales and through a rental program.The HIF supports data collection activities through centralized warehouse and laboratory facilities. The HIF warehouse provides hydrologic instruments, equipment, and supplies for USGS as well as Other Federal Agencies (OFA) and USGS Cooperators. The HIF also tests, evaluates, repairs, calibrates, and develops hydrologic equipment and instruments. The HIF Hydraulic Laboratory facilities include a towing tank, jet tank, pipe flow facility, and tilting flume. In addition, the HIF provides training and technical support for the equipment it stocks.

The Engineering Group seeks out new technology and designs for instrumentation that can work more efficiently, be more accurate, and or be produced at a lower cost than existing instrumentation. HIF works directly with vendors to help them produce products that will meet the mission needs of the USGS. For instrument needs not currently met by a vendor, the Engineering Group designs, tests, and issues contracts to have HIF designed equipment made. Sometimes HIF will patent a new design in the hope that instrument vendors will buy the rights and mass-produce the instrument at a lower cost to everyone.

A complete listing of descriptions of USGS Series is available at the Alaska Division of Geological & Geophysical Surveys (ADGGS) website.[27]

The United States Geological Survey Library holds copies of current and historical USGS publications, and is the largest earth sciences library in the world. Most publications are available for inter-library loan within the United States. Under the Organic Act, which provided for the formation of the USGS, the library was given extra copies of all USGS publications when published to be used in exchange with other domestic and foreign geological agencies, making the acquisition of the USGS Library collection one of the most cost efficient libraries in the U.S. government.

Many older USGS publications have been scanned and digitized by such services as Google Books and the Hathi Trust and Internet Archive. An online search will quickly reveal if a digital version is available. All USGS publications are public domain.