From Infogalactic: the planetary knowledge core
Jump to: navigation, search
This article is about the Marine Corps band. For the geographical unit, see Marine band (geology). For the 1942 short film, see United States Marine Band (film).

The Marine Band is entirely separate from its sister military band, the United States Marine Drum and Bugle Corps ("The Commandant's Own") and the 10 active duty Marine Corps field bands.

Today, the Marine Band performs in approximately 500 events every year[citation needed] including state funerals, state arrival ceremonies, state dinners, parades, concerts, and other social events. The Marine Band also travels across the country each October and November during its fall concert tour, a tradition that began in 1891 under its most famous director, composer John Philip Sousa. 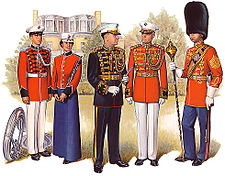 The Marine Band recruits experienced musicians; members are selected through a rigorous audition procedure and must satisfy additional security and physical requirements to be eligible. Selected band members serve under a four-year contract as active duty enlisted Marines and are subject to the Uniform Code of Military Justice and physical standards. They are the only members of the United States Armed Forces not required to undergo recruit training and do not perform combat missions. Also, they are not assigned to any unit other than the Marine Band.

The band members start at the rank of Staff Sergeant, and wear rank insignia with a lyre replacing the normal crossed rifles. Commissioned officers are drawn from the band, although drum majors are career Marines and are selected from Fleet Marine Force bands, as they are responsible for the military development of the band's members. As of 2010, the USMC spends about $10 million annually to support the band.[1]

The Marine Band marching down 15th Street during an inaugural parade held in honor of President Bill Clinton on January 20, 1997. 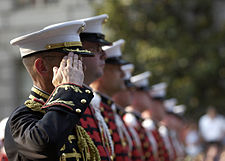 Members of the Marine Band escorting the remains of President Ronald Reagan to the Capitol Rotunda during his state funeral held in June 2004.

The Marine Band also has a professional support staff (Library, Recording Lab, Stage Managers, and Stage Crew) as well as the Administration, Public Affairs, and Supply offices, who work to coordinate, promote, and facilitate performances throughout the year.

The full band has a complement of about 130 members, but rarely do they all play together.

A 42-piece Marine Band is used for all Pentagon and formal military arrivals and patriotic openers for large events. Patriotic openers are 15 minutes of patriotic music, including the presentation and retirement of the colors, the "The Star-Spangled Banner" (national anthem), and the "Marines' Hymn." Patriotic openers are performed throughout the Washington Metropolitan Area at a variety of events for military organizations, federal agencies, and associations.

Events that the Marine Band participates in include: 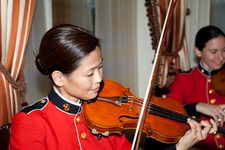 A violinist from the Marine Band performs during a reception at the residence of the Commandant of the Marine Corps on July 19, 2013. 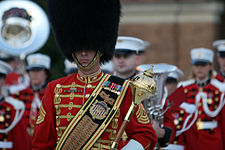 After the retirement of Drum Major Raphael Triay in 1855, then-Fife Major Francis Scala became Drum Major. On July 25, 1861, President Abraham Lincoln signed an Act of Congress to reorganize the Marine Band. This act abolished the rank of Fife Major (and in 1881 the fife was removed from Marine Corps instrumentation entirely), created the positions of Leader of the Band/Principal Musician, Drum Major, and authorized 30 musicians. Scala was the first Marine Band musician to receive the title "Leader of the Band"; John Roach was selected as Drum Major.

Today, the Drum Major serves as the senior enlisted member of "The President's Own" and is responsible for the band's appearance, ceremonial drill, and military decorum. He is charged with directing the band in ceremonies, including the inaugural parade, and regularly leads the band in review for presidents and visiting heads of state and other dignitaries.

The Drum Major's uniform is unique; he wears a bearskin headpiece and carries a ceremonial mace used to signal commands to the musicians. The drum major also wears the officer's version of the Eagle, Globe, and Anchor (the Marine Corps emblem). He also wears an ornate baldric, similar to a sash, embroidered with the band's crest and the Marine Corps' battle honors, as well as miniatures of his own medals.

Sousa composed several of his finest marches, including Semper Fidelis, while serving as director of the Marine Band.[2]

Thomas Powell Knox joined the Marine Band in 1961 as a trumpet player and moved to the arranging staff in 1966. Three years later, Knox was appointed chief arranger and continued to compose and arrange for the Marine Band until his retirement in 1985. Some of his more notable compositions include "God of Our Fathers" (commissioned for Ronald Reagan's first inauguration) and "American Pageant," which was commissioned for Richard Nixon's first inauguration. Knox arranged or composed over 300 pieces, many of which are still played by the Marine Band and other bands across America.