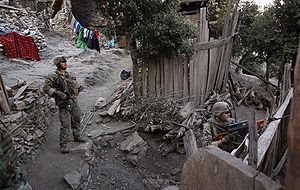 Its creation was announced on 23 November 2005 by US Defense Secretary Donald Rumsfeld, following a meeting between him, the USSOCOM commander General Bryan D. Brown, and the Marine Corps Commandant General Michael Hagee on 28 October 2005. MARSOC was officially activated on 24 February 2006 with ceremonies at Camp Lejeune, North Carolina.

The potential participation of the Marine Corps in SOCOM has been controversial since SOCOM was formed in 1986. At the time, Marine Corps leaders felt that their Force Reconnaissance units were best kept in the Marine Corps' MAGTF command structure, and that the detachment of an "elite" Marine Special Operations unit from the Marine Corps would be to the detriment of the Marine Corps as a whole. A re-evaluation following the September 11 attacks and the War on Terrorism, along with new policy established by Secretary Rumsfeld and then-Commandant Gen. James L. Jones at The Pentagon, caused the Marine Corps to work towards integration with SOCOM. The establishment of MARSOC represented the most significant step towards that goal, and followed the establishment of MCSOCOM Detachment One (DET1), a small Marine Corps detachment formed as a pilot program to test Marine Corps integration into SOCOM. It was made up of mostly Force Recon Marines from 1st and 2nd Force Reconnaissance Companies along with other hand picked support men and served with Navy SEALs under Naval Special Warfare Group One. Detachment 1 conducted a multitude of special operations in Iraq alongside their Special Operations brothers of the sister services. SOCOM conducted a study of the unit's deployment, which clearly indicated success and strong performance. Detachment 1 was disbanded in 2006 soon after the creation of MARSOC.

The first Marine Special Operations Company was stood up in June 2006, shortly after the creation of MARSOC and were sent to Afghanistan. It was deployed supporting the Global War on Terrorism in December 2013 alongside the 26th Marine Expeditionary Unit (Special Operations Capable) where they conducted various special operations missions, ranging from Direct action (military), reconnaissance and other mission sets.[3] 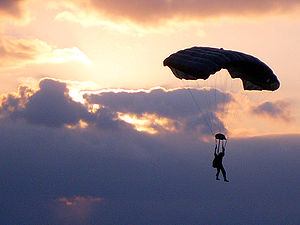 A Marine Raider glides towards his target during HALO operations. 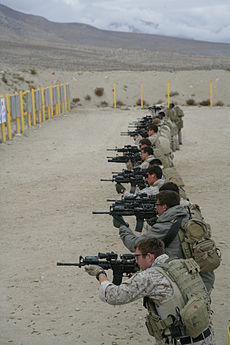 MARSOC is composed of about 2500 Marines[6] and Sailors, and is currently commanded by Major General Joseph L. Osterman. MARSOC's organization was finalized in 2007. The base unit of MARSOC is the fourteen-man Marine Special Operations Team (MSOT), commanded by a captain (O-3) as Team Commander, assisted by a master sergeant (E-8) as Team Chief. Each team has two identical squads, or Tactical Elements, each led by a gunnery sergeant (E-7) as Element Leader. MARSOC is based at Camp Lejeune, North Carolina and is split into three subordinate commands: 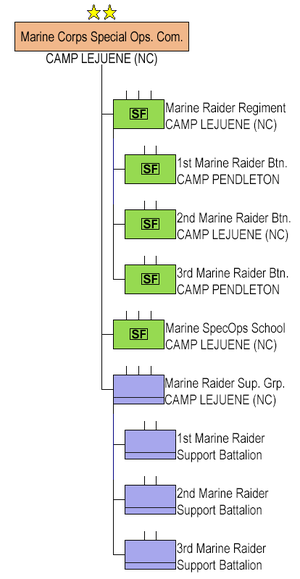 Special Operations Combat Service Specialists (SOCS-Ss) are Combat Service Support Marines who serve one standard tour with MARSOC in their primary MOS, such as Motor Transport or Logistics. Their training includes core skills for joint and interagency work as well as enhanced SOF combat skills training to enable their successful integration and survivability in special operations environments.[13]

Special Operations Capabilities Specialists (SOCS) are Combat Support Marines that are able to join MARSOC based upon their MOS skill. They receive advanced special operations forces training and certification. SOCSs are operational and tactical force multipliers and frequently deploy alongside Critical Skills Operators (CSOs). SOCS billet fields include Intelligence, Communications, Explosive Ordnance Disposal, Dog Handlers, and Fire-Control Specialists. Special Operations Capabilities Specialist are awarded the AMOS of 8071, and return to the operating forces after an extended tour of service with MARSOC.[13]

All Marines are screened to ensure that the Marines joining MARSOC meet the established prerequisites for duty within the command.

Selection of the right personnel begins with a rigorous screening process designed to identify the right Marines for the right billet within MARSOC. Operational billets are open only to males. Screening takes place in 3 stages: record screening, physical screening, and a psychological and medical evaluation.

On August 6 of 2014, MARSOC claimed and officially bestowed the prestigious Marine Raider moniker upon their subordinate combat units (Marine Special Operations Regiment) in commemoration of the fabled and elite amphibious light infantry unit that operated during World War II.[17]