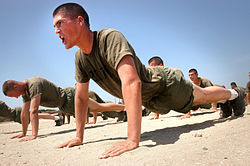 The United States Marine Corps requires that all Marines perform a Physical Fitness Test (PFT) and a Combat Fitness Test (CFT) once per fiscal year. Each test must have an interval of 6 months (same standards apply for reservists). The PFT ensures that Marines are keeping physically fit and in a state of physical readiness. It consists of pull-ups, crunches and a 3-mile run for males. For females it consists of flexed arm hang, crunches and a 3-mile run.

On 1 October 2008 the Marine Corps introduced the additional pass/fail Combat Fitness Test (CFT) to the fitness requirements. The CFT is designed to measure abilities demanded of Marines in a war zone.[1] 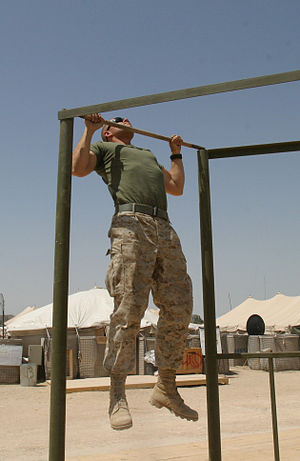 A maximum score is achieved with 20 pull-ups

The standard Marine Corps pull-up begins at the "dead-hang" with arms extended and the body hanging motionless. A successful pull-up is performed without excess motion, the body rising until the chin is above the bar, and body lowered back to the "dead-hang" position.

Changes in grip during the chinning are allowed as long as the feet don't touch the ground and only the hands come in contact with the pull-up bar. There is no time limit. Both an overhand (pronated) and underhand (supinated) hold on the bar can be used.[2][not in citation given]

The Marine Corps had originally indicated that, as of January 1, 2014, female Marines would be required to perform a minimum of three (3) pull-ups in order to pass the PFT.[3] However, in November 2013 it was announced that the Marine Corps would delay the implementation of the policy and that the option of doing pullups or the flexed-arm hang, “will continue into calendar year 2014.” Marine Corps officials want to further evaluate and validate the assumption that pullups are an appropriate metric for assessing upper-body strength in all Marines, said Lt. Col. Neil Murphy, a Marine spokesman at the Pentagon. In the meantime, the Marine Corps is encouraging women to continue training under the assumption that pullups will become the standard measure of physical fitness. According to Lt. Col. Murphy “...further assessment is expected to last into [calendar year 2014]. However, a final timetable has not been established.” 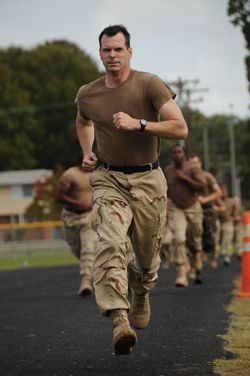 Marine Corps PFTs are scored the following way for males:

Marine Corps PFTs are scored the following way for females:

To earn a perfect PFT score of 300 points, a male must do 20 pull-ups, 100 crunches in less than two minutes, and complete the three mile run in 18 minutes or less. A female perfect score is 70 seconds on the flexed arm hang, 100 crunches, and a 21 minute three mile run.

The minimum a 17- to 26-year-old male Marine must complete are 3 pull-ups, 50 crunches, and a 28-minute 3-mile run. The minimum a female Marine in the same age group must complete are 15 seconds on a flexed arm hang, 50 crunches and a 31-minute 3-mile run. Note that merely completing the minimum in each category is not sufficient for passing the test (i.e., one must achieve a passing score and complete at least the minimum in each category in order to pass the test).[2]