The School of Infantry (SOI) is the second stage of initial military training for enlisted United States Marines after Recruit Training. Since the initial training pipeline is divided between coasts, Marines from areas east of the Mississippi River usually graduate from MCRD Parris Island and move on to SOI at SOI East (located at Camp Geiger, a satellite facility of Camp Lejeune in North Carolina), while those from the western half of the nation attend MCRD San Diego and move on to SOI West at the Camp San Onofre area of Camp Pendleton in California. Female Marines are an exception, all of whom go through MCRD Parris Island and SOI East.

The School of Infantry's training mission ensures "Every Marine is, first and foremost, a Rifleman". At SOI, Marines with the Military Occupational Specialty of infantry (0300 occupational field) are trained at the Infantry Training Battalion (ITB), while all non-infantry Marines are trained in basic infantry and combat skills at the Marine Combat Training Battalion (MCT Bn). SOI marks a transition in the professional training of entry-level students from basically trained Marines to combat-ready Marines.

Prior to 1953, there was no formal infantry training in the Marine Corps, and all Marines received combat training at recruit training. The Marine Corps established Infantry Training Regiments at Camp Lejeune and Camp Pendleton in that year. Between 1954 & 1966, all Marines received 12 weeks of Boot Camp (Basic Training) and 8 weeks of Infantry Training Regiment (ITR) regardless of their Primary Military Occupational Specialty (MOS), growing out of the philosophy that all Marines are riflemen first. Due to manpower demands for Viet Nam, in 1967 Boot Camp training was reduced from 12 weeks to 8 weeks, and ITR was reduced from 8 weeks to 4 weeks. In 1971, infantry skills training for non-infantry Marines was folded into recruit training and entailed only 60 training hours. During the late 1970s and through the 1980s, Marines assigned an Infantry MOS went to Infantry Training School, commonly referred to as "ITS". This lasted until the Marine Corps established Marine Combat Training as a 28-day course in 1989 to teach rifleman skills to all male Marines. In 1996, the 2nd Marine Division disbanded Division Schools, passing the role of advanced infantry training to the newly established Advanced Infantry Training Company at the School of Infantry (SOI). Prior to 1997, only male Marines were trained at SOI schools; females went directly to their MOS schools.

File:Itb logo.GIF The training is accomplished with a combination of classroom instruction, hands-on practical application, and live-fire evolutions. The Marine Combat Instructors at SOI provide continuity and consistency in the continuum of training and mentoring entry-level Marines. Also trained at the SOI, these instructors began earning the MOS 0913 (formerly MOS 8513) in 2003.

The Infantry Training Battalion's mission is to "train and qualify Marines in entry level infantry military occupational specialties [in order to] provide the Operating Forces and Reserve Component with Marines capable of conducting expeditionary combat operations."

Infantry Training Battalion is a 59-day training course (prior to September 2008, it was 52 days[1]) that develops new Marines into infantrymen "who can fight, survive, and win in a combat situation". The first two weeks are a common skills package that all infantry MOSs share, where Marines receive instruction in combat marksmanship, use of grenades, identifying and countering improvised explosive devices, convoy operations, Military Operations in Urban Terrain (MOUT), tactical formations, land navigation, and patrolling. Afterward, Marines receive instruction specific to their infantry MOS, regarding machineguns, mortars, reconnaissance, LAV-25s, or anti-tank warfare. The training cycle includes physical conditioning via physical training, conditioning marches, and sustainment training in the Marine Corps Martial Arts Program. Leadership traits and the application of the core values in every aspect of the Marine's life are also emphasized.

File:MCT Patrolling Instructions.jpg
A combat instructor from Company E teaches a group of students the fundamentals of patrolling

Marine Combat Training is a 29-day course (prior to September 2008 it was 22 days) in which entry-level non-infantry Marines are taught the common skills needed in combat. Marines learn the basics of combat marksmanship, counter-improvised explosive device techniques, how to conduct the defense of a position, convoy operations, combat formations, fireteam assaults, patrolling, MOUT, use of the AN/PRC-119 radio, reporting military intelligence, land navigation, and the use of hand grenades, the M203 grenade launcher, M249 Squad Automatic Weapon, and M240 machine gun. Training also includes combat conditioning by running an obstacle course, conducting marches, physical training, and Marine Corps Martial Arts Program. Upon completion of Marine Combat Training, the Marine is to have gained the knowledge and ability to operate in a combat environment as a basic rifleman and to perform his or her primary duties under fire. 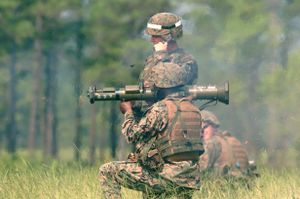 Marines in the Marine Corps Combat Instructor Course fire the AT-4 as part of their training to become the instructors of Marine Combat Training and Infantry Training Battalion.
File:MAIC Black Belt.jpg
Martial Arts Instructor Trainer with Black Belt