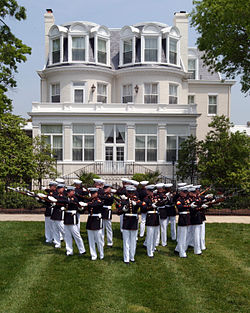 The Silent Drill Platoon first performed in 1948, originally as a one-time show, and received such an overwhelming response that it soon became part of the routine parades at Marine Barracks, Washington, D.C.

The Marines execute a series of calculated drill movements and precise handling of their hand-polished 10.5 pounds (4.8 kg) M1 Garand rifles with fixed bayonets. The routine concludes with a unique rifle inspection involving elaborate rifle spins and tosses. All drill movements are done with superfluous spins of the rifle, making the Silent Drill Platoon's drill unique from other Marine units' drill movements. 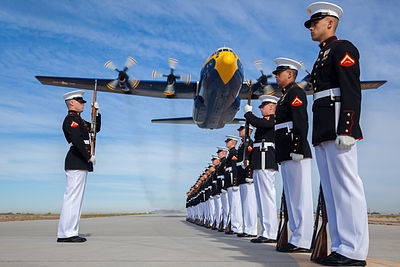 Marines are selected from students at the two Schools of Infantry, located at Camp Pendleton, California, and Camp Lejeune, North Carolina, from interviews conducted by barracks personnel. Once selected, Marines are assigned to Marine Barracks, Washington, D.C., to serve a two-year ceremonial tour. Beyond their ceremonial duties, the Marines collaterally train in the field as infantrymen. Throughout the year, these Marines hone their infantry skills at the Marine Corps Combat Development Command in Marine Corps Base Quantico, Virginia and other bases. The Marines selected must be male and must be between 5'11" and 6'1" tall and be in the median of their weight requirements for their height. Uniformity is a key asset.

Once the year's Silent Drill Platoon members are selected, they begin their training in Washington, and continue to train at Marine Corps Air Station Yuma, Arizona, perfecting their routine year-round. Throughout the year, they perform at Marine Barracks, Washington, D.C., and at numerous events across the United States, and also represent the Marine Corps abroad.