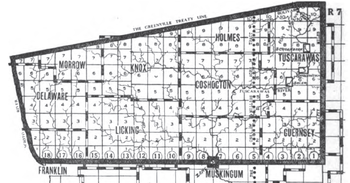 The US Military District 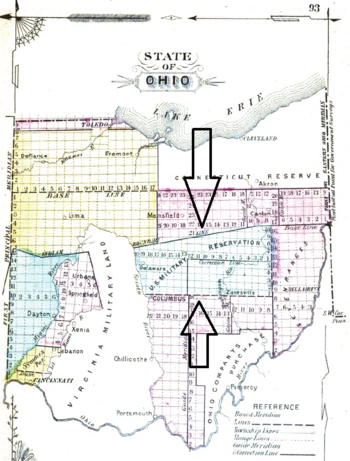 The District lies between the arrows

The United States Military District was a land tract in central Ohio that was established by the Congress to compensate veterans of the American Revolutionary War for their service. The tract contains 2,539,110 acres (10,275.4 km2) in Noble, Guernsey, Tuscarawas, Muskingum, Coshocton, Holmes, Licking, Knox, Franklin, Delaware, Morrow, and Marion Counties.

The Congress had little money to pay the soldiers who fought for independence. They made promises of land to induce army enlistment. By resolutions of September 16 and 18, 1776, and August 12, September 22, and October 3, 1780, they proposed to give each officer or private continuously to serve in the United States army until the close of the war, or until discharged, or to the representatives of those slain by the enemy, the amounts in the table.[1]

Under the Land Ordinance of 1785, land was made available in the Seven Ranges for bounties, but this proved inadequate.

On March 3, 1803, the unclaimed land was divided into one mile (1.6 km) square sections and into half sections, and sold as essentially Congress Lands by the Chillicothe and Zanesville land offices.[1][6] 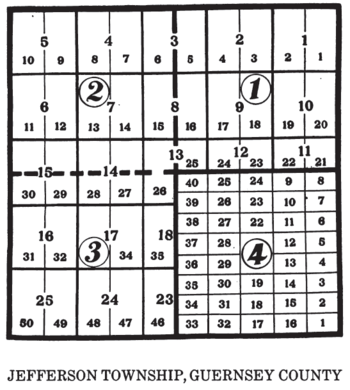 In the USMD, as elsewhere in the surveyed lands, many veterans sold their warrants to speculators or jobbers at a fraction of their true value. Of the 1,043,460 acres (4,222.7 km2) claimed by land warrant, 569,542 acres (2,304.85 km2) were patented to just 22 persons. The actual location of the 262 quarter townships claimed by military warrants was determined by a drawing. Few absentee owners ever visited their land, and fewer still spent any time on it. They sold it, sight unseen, as a speculative venture, often paying no regard to any attachment of sale made by Ohio officials for delinquent taxes.[2]

By 1823, the United States government had issued 10,958 warrants for service in the Revolutionary War totaling 1,549,350 acres (6,270.0 km2), and more were issued under various laws thereafter. These warrants could only be used in the USMD except for those used in the Ohio Company lands or in the Symmes Purchase. Veterans who held on to their warrants finally received relief by the act of May 30, 1830, which allowed them to exchange their warrants for land scrip issued in 80-acre (320,000 m2) amounts, good for $1.25 an acre on land anywhere in the public domain available for private entry. This act, plus seven other warrant exchange acts, caused more than 12,138,840 acres (49,124.1 km2) of land scrip to be issued. Researchers will find that land scrip could be bought cheaply, depending on market conditions. Its use in land transactions does not infer the holder was entitled to it by military service. Veterans often sold their land scrip to land jobbers.[2]

The Moravian Indian Grants at the Tuscarawas County villages of Schoenbrunn, Gnaddenhutten and Salem are independent 4,000-acre (16 km2) surveys, not on the same grid, within the USMD. Part of the independent “Muskingum River Survey” of Zane's Tracts also lies in the USMD.