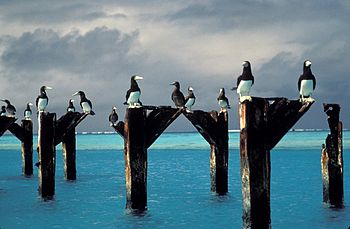 Among them, Palmyra Atoll is the only incorporated territory. As of 2008, none of the islands have any permanent residents. The only human population consists of temporarily stationed scientific and military personnel. The 2000 census counted 315 people on Johnston Atoll and one person on Wake Island.[1]

There has been no modern indigenous population, except at the 1940 census. In 1936 a colonization program began to settle Americans on Baker, Howland, and Jarvis, but all three islands were evacuated in 1942 as a result of World War II.[2][3]

The islands are grouped together as a statistical convenience. They are not administered collectively, nor do they share a single cultural or political history beyond being uninhabited islands under the sovereignty of the United States.

They are collectively represented by the ISO 3166-1 alpha-2 code UM. The individual islands have ISO 3166-2 numerical codes, see ISO 3166-2:UM. The Internet country code top-level domain (ccTLD) ".um" has historically been assigned to the islands; however, the .um ccTLD was retired in January 2007.[4]

ISO introduced the term "United States Minor Outlying Islands" in 1986. From 1974 until 1986, five of the islands (Baker Island, Howland Island, Jarvis Island, Palmyra Atoll and Kingman Reef) were grouped under the term United States Miscellaneous Pacific Islands, with ISO 3166 code PU. The code of Midway Atoll was MI, the code of Johnston Atoll was JT, and the code of Wake Island was WK. The Pacific islands are surrounded by large Exclusive Economic Zones.

The following is a list of island airports with ICAO (IATA) codes:

Three of the islands are listed with ports in the World Port Index,[7] with World Port Number:

Baker Island, Howland Island and Jarvis Island have a small boat landing place on each. Kingman Reef and Navassa Island have offshore anchorage only.