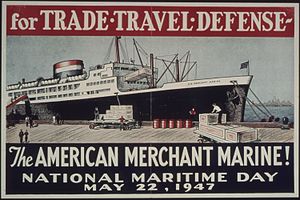 National Maritime Day is a United States holiday created to recognize the maritime industry. It is observed on May 22, the date in 1819 that the American steamship Savannah set sail from Savannah, Georgia on the first ever transoceanic voyage under steam power. The holiday was created by the United States Congress on May 20, 1933.

In 2013, National Maritime Day was celebrated with family picnics and boat tours at the Port of San Diego, and with maritime career fairs in Seattle and the Port of Baltimore, as well as with traditional memorial ceremonies.[2]

On May 22, 2016, the Baltimore events will be held at the NS Savannah, Pier 13 of the Canton Marine Terminal in Baltimore, Maryland. Boy Scout Explorer Post # 0438, a re-enactment group representing the First Baltimore Sharpshooters, aka Aisquith's Sharpshooters, will be there in replica uniforms. Battle of Baltimore