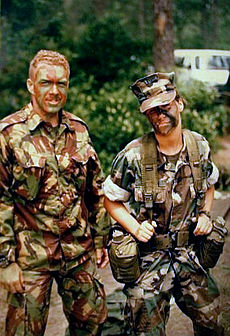 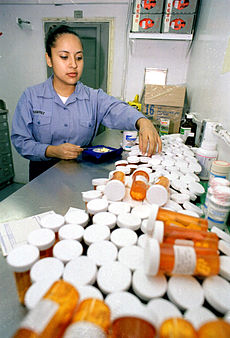 A corpsman aboard an aircraft carrier in 1999.

The hospital corpsman works in a wide variety of capacities and locations, including shore establishments such as naval hospitals and clinics, aboard ships, and as the primary medical caregivers for sailors while underway. Hospital corpsmen are frequently the only medical care-giver available in many fleet or Marine units on extended deployment. In addition, hospital corpsmen perform duties as assistants in the prevention and treatment of disease and injury and assist health care professionals in providing medical care to sailors and their families.

They may function as clinical or specialty technicians, medical administrative personnel and health care providers at medical treatment facilities. They also serve as battlefield corpsmen with the Marine Corps, rendering emergency medical treatment to include initial treatment in a combat environment. Qualified hospital corpsmen may be assigned the responsibility of independent duty aboard ships and submarines; Fleet Marine Force, SEAL and Seabee units, and at isolated duty stations where no medical officer is available.

The colloquial form of address for a hospital corpsman is "Doc". In the United States Marine Corps, this term is generally used as a sign of respect.[2] 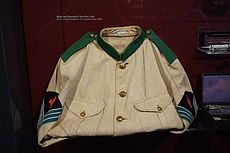 Prior to the establishment of the Hospital Corps, enlisted medical support in the Navy was limited in scope. In the Continental Navy and the early U.S. Navy, medical assistants were assigned at random out of the ship's company. Their primary duties were to keep the irons hot and buckets of sand at the ready for the operating area. It was commonplace during battle for the surgeons to conduct amputations and irons were used to close lacerations and wounds. Sand was used to keep the surgeon from slipping on the bloody ship deck. Previously, corpsmen were commonly referred to as a loblolly boy, a term borrowed from the British Royal Navy, and a reference to the daily ration of porridge fed to the sick. The nickname was in common use for so many years that it was finally officially recognized by the Navy Regulations of 1814. In coming decades, the title of the enlisted medical assistant would change several times—from loblolly boy, to nurse (1861), and finally to bayman (1876). A senior enlisted medical rate, surgeon's steward, was introduced in 1841 and remained through the Civil War. Following the war, the title surgeon's steward was abolished in favor of apothecary, a position requiring completion of a course in pharmacy. 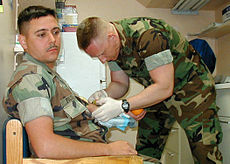 Still, there existed pressure to reform the enlisted component of the Navy's medical department—medicine as a science was advancing rapidly, foreign navies had begun training medically skilled sailors, and even the U.S. Army had established an enlisted Hospital Corps in 1887. Navy Surgeon General J.R Tyron and subordinate physicians lobbied the Navy administration to take action. With the Spanish–American War looming, Congress passed a bill authorizing establishment of the U.S. Navy Hospital Corps, signed into law by President William McKinley on 17 June 1898. Three rates were created therein—hospital apprentice, hospital apprentice first class (a petty officer third class), and hospital steward, which was a chief petty officer.

A revision in 1916 established a new rate structure. With the introduction of a second junior rate there were now hospital apprentice second class (HA2c) and hospital apprentice first class (HA1c). The rating title for petty officers was established as pharmacist's mate (PhM), following the pattern of some of the Navy's other ratings (boatswain's mate, gunner's mate, etc.). Pharmacist's mate third class (PhM3c), second class (PhM2c), and first class (PhM1c) were now the petty officers, and chief pharmacist's mate (CPhM) was the CPO. This structure remained in place until 1947. 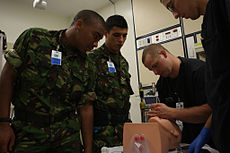 Bermuda Regiment medics and U.S. Navy corpsmen at Camp Lejeune in May 2011.

A total of 684 personal awards were awarded to hospital corpsmen, including 22 Medals of Honor, 55 Navy Crosses, and 237 Silver Stars. During World War I, hospital corpsmen served throughout the fleet, earning particular distinction on the Western Front with the Marine Corps.

Hospital corpsmen continued to serve at sea and ashore, and accompanied Marines and Marine units into battle during the Korean and Vietnam wars. Fifteen hospital corpsmen were counted among the dead following the bombing of the Marine barracks in Beirut in 1983. Hospital corpsmen also served in the Iraq and Afghanistan wars providing corpsmen for convoys, patrols, and hospital or clinic treatment.

Whether they are assigned to hospital ships, reservist installations, recruiter offices, or Marine Corps combat units, the rating of hospital corpsman is the most decorated in the United States Navy with 22 Medals of Honor, 174 Navy Crosses, 31 Navy Distinguished Service Medals, 946 Silver Stars, and 1,582 Bronze Star Medal's with Combat "V's for heroism.[4] Twenty naval ships have been named after hospital corpsmen. Prior to selection to the command master chief program, the 11th MCPON, Joe R. Campa, was a hospital corpsman. 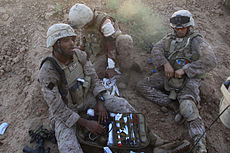 Two hospital corpsman attached to 1st Battalion, 5th Marines treat a wounded Marine in Afghanistan in 2009. The corpsman on the right would later be awarded the Bronze Star Medal with the Combat Distinguishing Device (Combat "V") for his actions.

Because of the need for hospital corpsmen in a vast array of foreign, domestic, and shipboard duty stations, as well as with United States Marine Corps units, the Hospital Corps is the largest occupational rating (Navy Enlisted Classification-HM) in the United States Navy, with about 25,000 members active duty and reserve.[clarification needed]

The basic training for hospital corpsmen is conducted at the Medical Education and Training Campus, located at the Joint Base, Ft. Sam Houston, TX. Originally located at Great Lakes IL. one of the Navy's "A" schools (primary rating training). Upon graduation, the hospital corpsman is given the Navy Enlisted Classification (NEC) code of HM-0000, or "quad-zero" in common usage. Students go through an 18-week course that provides in-depth and extensive training into the application of emergency medical techniques, disease and pathologies, and nursing techniques.

NECs are not as analogous to MOS in the United States Army and Marine Corps, or AFSC in the Air Force as the rate in the Navy. There are primary NECs, and secondary NECs. For example, a hospital corpsman who completes Field Medical Training Battalion (FMTB) and earns the NEC HM-8404, moves that NEC to primary and has a secondary NEC of HM-0000. If that hospital corpsman attends a "C" School, then the NEC earned at the "C" School becomes their primary and HM-8404 becomes the secondary. Some hospital corpsmen go on to receive more specialized training in roles such as medical laboratory technician, radiology technician, aerospace medicine specialist, pharmacy technician, operating room technician, etc. This advanced education is done through "C" schools, which confer additional NECs. Additionally, hospital corpsmen (E-5 and above) may attend independent duty corpsman training, qualifying for independent duty in surface ships and submarines, with diving teams, and Fleet Marine Force Recon teams, as well as at remote shore installations. In addition to advanced medical training, these Hospital Corpsmen receive qualification in sanitation and public health. 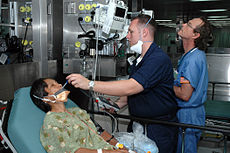 A corpsman takes a patient's temperature in 2006.

Of note is the Field Medical Training Battalion (FMTB), with locations at Camp Del Mar and Camp Johnson, where sailors bound for service with USMC operating forces earn the NEC HM-8404, Field Medical Service Technician. FMTB provides specialized training in advanced emergency medicine and the fundamentals of Marine Corps life, while emphasizing physical conditioning, small arms familiarity, and basic battlefield tactics. As of 2010[update], this rigorous training is 8 weeks. Training for the Fleet Marine Force (FMF) familiarizes navy corpsmen with the Marines. A bond and mutual respect is often formed between Marines and their assigned hospital corpsmen, earning respect apart from their Navy shipmates. FMF hospital corpsmen are issued the Marine Corps service uniforms and camouflage uniforms (MARPAT) while assigned to the Marine Corps and also have the option to go Marine Corps Regulations. They are then issued a new seabag containing the Marine uniforms (except dress blues) with uniform matching Navy rate chevrons instead of the Marine rank chevrons, and collar rank insignias, and wear those instead of traditional Navy uniforms. The Navy's new digitized camouflage working uniform are worn by sailors stationed at other naval facilities.

Hospital corpsmen can further specialize; they may undergo further training to become Special Amphibious Reconnaissance Corpsman, or SARC. They are usually found in both the FMF Recon, Marine Division Recon and MARSOC units. They are trained and skilled in combat, including combatant swimming, opened/closed circuit scuba diving, military free-fall and amphibious operations. They act as advisers regarding health and injury prevention, and treat illnesses from decompression sickness as well as other conditions requiring hyperbaric treatment.

Hospital corpsmen who have received the warfare designator of enlisted fleet marine force warfare specialist are highly trained members of the Hospital Corps who specialize in all aspects of working with the United States Marine Corps operating forces. Attainment of this designation is highly prized among all corpsmen. The enlisted fleet marine force warfare designation for hospital corpsmen is the only US Navy warfare device awarded solely by a US Marine Corps general officer. This awarding authority cannot be delegated to US Navy officers. However, obtaining the title of "FMF" is a rigorous procedure and not every hospital corpsman who has been with a Marine Corps unit will wear the FMF warfare device. U.S. Navy officers in the medical community (Medical Corps (doctor), Nurse Corps, Dental Corps, Medical Service Corps) can earn and wear the officer equivalent to this insignia. Additionally any sailor attached to a USMC unit can earn and wear an FMF warfare device. (e.g., administrative rates such as logistic specialists) provided they complete all the qualifications for the FMF warfare specialist.

The first physician assistants were selected from Navy corpsmen who had combat experience in Vietnam. The Navy trained its own physician assistants drawing from the ranks of qualified independent duty hospital corpsmen at the Naval School of Health Sciences in Portsmouth, VA until 1985, then at San Diego, CA and current the Interservice Physician's Assistant Program (IPAP) with a university affiliation of the University of Nebraska Medical Center (UNMC). It is conducted in two phases the first phase at the Graduate School and Academy of Health Sciences at AMEDDC&S, Ft. Sam Houston, TX and the second phase at various medical facilities and specialties. When training completed they become officers in the Medical Service Corps (MSC). Former Navy hospital corpsmen are also represented in many medical disciplines, as physicians, nurses, medical administrators and other walks of life. After completing their training, a physician assistant is promoted to the rank of lieutenant junior grade (O-2). 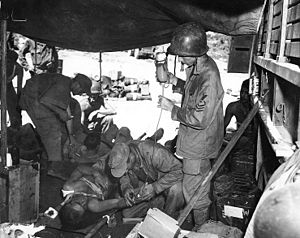 A corpsman treats a patient at the Battle of Naktong Bulge in Korea, in 1950

During World War II, the United States Maritime Service created a Hospital Corps similar to the U.S. Navy's and sent pursers through this hospital corpsman training, to serve in a combined administrative and medical role on civilian tankers, freighters, and oilers. Prior to this, there were no competent trained personnel to perform first aid aboard these vessels. The purser-corpsman was trained in anatomy, physiology, pharmacy, clinical laboratory, hygiene and sanitation, emergency treatment, first aid, and nursing. They were taught how to administer injections, treat compound fractures, administer blood plasma, and suture wounds.

The Maritime Service’s Hospital Corps School was founded at the Sheepshead Bay Maritime Service Training Station on 7 December 1942. Surgeon S.S. Heilwell (R), United States Uniformed Public Health Service, was placed in charge of training. The course was taught over four months, with a 12-week period of didactic classroom experience and four weeks of practical experience at a Marine hospital. The original class of 331 students resulted in 239 graduates on 12 March 1943, but demand saw an increase in the class to 600 students, to cycle in 50 student classes starting on a weekly basis. Training stations were instructed to provide careful scrutiny by examining boards for all candidates. Pursers on sea duty started arriving at the station on 10 August 1943. By 1 January 1944, there were 600 purser-corpsmen at sea, with 1,324 graduates in the Maritime Service. Selection required an above average mark on the General Classification Test and interest in both administration and health care.[5]