United States Pacific Command (USPACOM) is a unified combatant command of the United States armed forces responsible for the Indo-Asia-Pacific region. It is the oldest and largest of the unified combatant commands. Its commander, the senior U.S. military officer in the Pacific, is responsible for military operations in an area which encompasses more than 100 million square miles, or roughly 50 percent of the Earth’s surface, stretching from the waters off the west coast of the United States to the western coastal boarder of India, from the Arctic to the Antarctic. The Commander reports to the President of the United States through the Secretary of Defense and is supported by Service component and subordinate unified commands, including U.S. Army Pacific, U.S. Pacific Fleet, U.S. Pacific Air Forces, U.S. Marine Forces Pacific, U.S. Forces Japan, U.S. Forces Korea, Special Operations Command Korea, and Special Operations Command Pacific. The USPACOM headquarters building, the Nimitz-MacArthur Pacific Command Center, is located on Camp H.M. Smith, Hawai’i.

"United States Pacific Command protects and defends, in concert with other U.S. Government agencies, the territory of the United States, its people, and its interests. With allies and partners, we will enhance stability in the Indo-Asia-Pacific region by promoting security cooperation, encouraging peaceful development, responding to contingencies, deterring aggression and, when necessary, fighting to win. This approach is based on partnership, presence and military readiness.

We recognize the global significance of the Indo-Asia-Pacific region and understand that challenges are best met together. Consequently, we will remain an engaged and trusted partner committed to preserving the security, stability, and freedom upon which enduring prosperity in the Indo-Asia-Pacific region depends. We will collaborate with the Services and other Combatant Commands to defend America's interests."[1]

USPACOM's geographic area of responsibility encompasses the Pacific Ocean from Antarctica at 92°W, north to 8°N, west to 112°W, northwest to 50°N/142°W, west to 170°E, north to 53°N, northeast to 62°30’N/175°W, north to 64°45’N/175°W, south along the Russian territorial waters to the People's Republic of China, Mongolia, the Democratic People's Republic of Korea, the Republic or Korea, and Japan; the countries of Southeast Asia and the southern Asian landmass to the western border of India; the Indian Ocean east and south of the line from the from the India/Pakistan coastal border west to 68°E, south along 68°E to Antarctica; Australia; New Zealand; Antarctica, and Hawai'i.

In Asia, one of the most effective and impressive ad hoc multilateral efforts took place in the wake of the horrific December 2004 earthquake and tsunami that left some three hundred thousand people dead or missing, with upwards of a million more displaced in eleven South Asian and Southeast Asian nations. As devastating as the damage was, it could have been much worse if it had not been for the rapid response by the international community. At the height of the relief effort, some sixteen thousand U.S. military personnel were deployed throughout the areas most affected by tragedy; more than two dozen U.S. ships (including the aircraft Carrier Strike Group Nine, a Marine amphibious group, and a hospital ship) and more than one hundred aircraft were dedicated to the disaster-relief effort, along with forces from Australia, Canada, Japan, India, and the affected countries.[3] 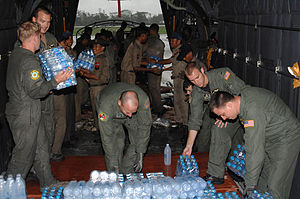 In May 2008, Commander, Marine Corps Forces Pacific was designated as Commander, Joint Task Force Caring Response, a humanitarian assistance and disaster relief effort for Burma, devastated by Cyclone Nargis. During a delivery by the 36th Airlift Squadron on 19 May 2008 to Yangon International Airport in Burma approximately 15,000 pounds (6.8 t) of water, water containers, rations, and mosquito netting were unloaded from the a C-130 Hercules aircraft.[4] Expeditionary Strike Group 7/TF 76/31st Marine Expeditionary Unit also stood by off the Myanmar coast for some time. However it was not allowed to deliver further aid.