Julian Castro was confirmed by Senate on July 9, 2014, and assumed office on July 28, 2014, succeeding Shaun Donovan, who was nominated to be the next Director of the Office of Management and Budget.[4][5]

Ben Carson was nominated by President Donald Trump to fill this role. Carson was approved by the Senate on March 2, 2017.[6] 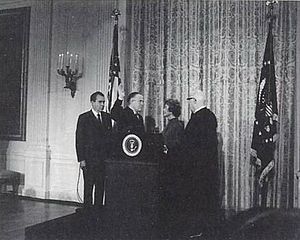 George W. Romney was sworn in as Secretary of Housing and Urban Development on January 22, 1969, with President Richard Nixon in attendance.