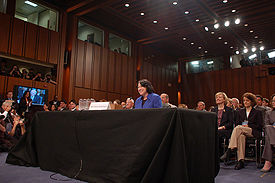 The United States Senate Committee on the Judiciary, informally the Senate Judiciary Committee, is a standing committee of the United States Senate, of the United States Congress. The Judiciary Committee, with 20 members, is in charge of conducting hearings prior to the Senate votes on confirmation of federal judges (including Supreme Court justices) nominated by the President, as well as presidential appointments in the Department of Justice. In recent years, this role has made the committee increasingly a point of contention, with numerous party-line votes and standoffs over which judges should be approved. The committee also has a broad jurisdiction over matters relating to federal criminal law,[1] as well as human rights, immigration law, intellectual property rights, antitrust law, and Internet privacy. It is also Senate procedure that all proposed Constitutional Amendments pass through the Judiciary Committee.

Established in 1816 as one of the original standing committees in the United States Senate, the Senate Committee on the Judiciary is one of the oldest and most influential committees in Congress. Its broad legislative jurisdiction has assured its primary role as a forum for the public discussion of social and constitutional issues. The Committee is also responsible for oversight of key activities of the executive branch, and is responsible for the initial stages of the confirmation process of all judicial nominations for the federal judiciary.[2]