The United States is known to have possessed three types of weapons of mass destruction: nuclear weapons, chemical weapons, and biological weapons. The U.S. is the only country to have used nuclear weapons in combat in the atomic bombings of Hiroshima and Nagasaki in World War II. It had secretly developed the earliest form of the atomic weapon during the 1940s under the title "Manhattan Project".[2] The United States pioneered the development of both the nuclear fission and hydrogen bombs (the latter involving nuclear fusion). It was the world's first and only nuclear power for four years before being joined in the "nuclear club" by the Soviet Union. The United States has the second largest number of deployed nuclear weapons in the world, after Russia.[3] 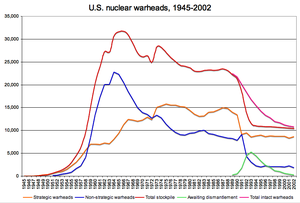 Nuclear weapons have been used twice in wartime: two nuclear weapons were used by the United States against Japan in World War II in the atomic bombings of Hiroshima and Nagasaki. Altogether, the two bombings killed an estimated 140,000 civilians and military personnel and injured another 130,000. The atomic bombings of Hiroshima and Nagasaki were the first and only time the U.S. employed weapons of mass destruction against an enemy state in warfare.

The U.S. conducted an extensive nuclear testing program. 1,054 tests were conducted between 1945 and 1992. The exact number of nuclear devices detonated is unclear because some tests involved multiple devices while a few failed to explode or were designed not to create a nuclear explosion. The last nuclear test by the United States was on September 23, 1992; the U.S. has signed but not ratified the Comprehensive Test Ban Treaty.

The United States is one of the five "Nuclear Weapons States" under the Nuclear Non-Proliferation Treaty, which the U.S. ratified in 1968. On October 13, 1999, the U.S. Senate rejected ratification of the Comprehensive Test Ban Treaty, having previously ratified the Partial Test Ban Treaty in 1963. The U.S. has not, however, tested a nuclear weapon since 1992, though it has tested many non-nuclear components and has developed powerful supercomputers in an attempt to duplicate the knowledge gained from testing without conducting the actual tests themselves.

In the early 1990s, the U.S. stopped developing new nuclear weapons and now devotes most of its nuclear efforts into stockpile stewardship, maintaining and dismantling its now-aging arsenal. The administration of George W. Bush decided in 2003 to engage in research towards a new generation of small nuclear weapons, especially "earth penetrators".[4] The budget passed by the United States Congress in 2004 eliminated funding for some of this research including the "bunker-busting or earth-penetrating" weapons.

The exact number of nuclear weapons possessed by the United States is difficult to determine. Different treaties and organizations have different criteria for reporting nuclear weapons, especially those held in reserve, and those being dismantled or rebuilt:

In 2002, the United States and Russia agreed in the SORT treaty to reduce their deployed stockpiles to not more than 2,200 warheads each. In 2003, the U.S. rejected Russian proposals to further reduce both nation's nuclear stockpiles to 1,500 each.[9] In 2007, for the first time in 15 years, the United States built new warheads. These replaced some older warheads as part of the Minuteman III upgrade program.[10] 2007 also saw the first Minuteman III missiles removed from service as part of the drawdown. Overall, stockpiles and deployment systems continue to decline in number under the terms of the New START treaty.

In 2014, Bulletin of the Atomic Scientists released a report, stating that there are a total of 2,530 warheads kept in reserve, and 2,120 actively deployed. Of the warheads actively deployed, the number of strategic warheads rests at 1,920 (subtracting 200 bombs that are "deployed", but are not considered "strategic"). The amount of warheads being actively disabled rests at about 2,700 warheads, which brings the total United States inventory to about 7,400 warheads.[11] 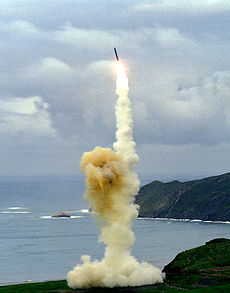 The U.S. Air Force currently operates 450 ICBMs, located primarily in the northern Rocky Mountain states and the Dakotas. These are all of the Minuteman III ICBM variants. Peacekeeper missiles were phased out of the Air Force inventory in 2005. All USAF Minuteman II missiles have been destroyed in accordance with the START treaty and their launch silos imploded and buried then sold to the public. To comply with the START II most U.S. multiple independently targetable reentry vehicles, or MIRVs, have been eliminated and replaced with single warhead missiles. However, since the abandonment of the START II treaty, the U.S. is said to be considering retaining 500 warheads on 450 missiles.[10] The U.S. goal under the SORT treaty is to reduce from 1,600 warheads deployed on over 500 missiles in 2003 to 500 warheads on 450 missiles in 2012. The first Minuteman III were removed under this plan in 2007 while, at the same time, the warheads deployed on Minuteman IIIs began to be upgraded from smaller W62s to larger W87s from decommissioned Peacekeeper missiles.[10] 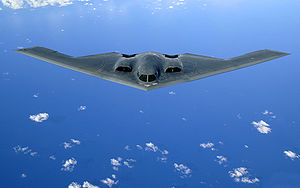 The U.S. Air Force also operates a strategic nuclear bomber fleet. The bomber force consists of 93 B-52 Stratofortresses, and 20 B-2 Spirits. All 64 B-1s were retrofitted to operate in a solely conventional mode by 2007 and are no longer counted as nuclear platforms.

In addition to this, the U.S. military can also deploy smaller "tactical" nuclear weapons either through cruise missiles or with conventional fighter-bombers. The U.S. maintains about 400 nuclear gravity bombs capable of use by F-15, F-16, and F-35.[10] Some 350 of these bombs are deployed at seven airbases in six European NATO countries;[10] of these, 180 tactical B61 nuclear bombs fall under a nuclear sharing arrangement.[13] 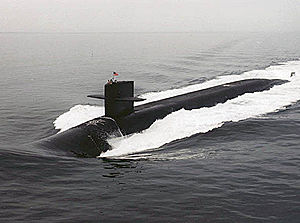 The U.S. Navy currently has 18 Ohio-class submarines deployed, of which 14 are ballistic missile submarines. Each submarine is equipped with a maximum complement of 24 Trident II missiles. Approximately 12 U.S. attack submarines were equipped to launch nuclear Tomahawk missiles, but these weapons were removed from service by 2013.[14] Sea-launch weapons make up the majority of weapons declared under START II rules. Some Trident missiles are equipped with the W88 warhead.

Negotiations for a legally binding verification protocol to the BWC proceeded for years. In 2001, negotiations ended when the Bush administration rejected an effort by other signatories to create a protocol for verification, arguing that it could be abused to interfere with legitimate biological research.

The U.S. Army Medical Research Institute of Infectious Diseases, located in Fort Detrick, Maryland, produces small quantities of biological agents, for use in biological weapons defense research. According to the U.S. government, this research is performed in full accordance with the BWC.

In September 2001, shortly after the September 11 terrorist attacks on the United States, there was series of mysterious anthrax attacks aimed at U.S. media offices and the U.S. Senate which killed five people. The anthrax used in the attacks was the Ames strain, which was first studied at Fort Detrick and then distributed to other labs around the world.

In World War I, the U.S. produced its own chemical munitions, including phosgene and mustard gas. The U.S. only created about 4% of the total chemical weapons produced for that war and just over 1% of the era's most effective weapon, mustard gas. (U.S. troops suffered less than 6% of gas casualties.) Although the U.S. had begun a large-scale production of Lewisite, for use in an offensive planned for early 1919, it in fact never deployed any chemical weapons.[18][19]

Chemical weapons were not used by the Allies or Germany during World War II, but such weapons were deployed to Europe from the United States. In 1943, German bombers attacked the port of Bari in Southern Italy, sinking several American ships – among them John Harvey, which was carrying mustard gas. The presence of the gas was highly classified, and, according to the U.S. military account, "Sixty-nine deaths were attributed in whole or in part to the mustard gas, most of them American merchant seamen" out of 628 mustard gas military casualties.[Navy 2006][Niderost] The affair was kept secret at the time and for many years. After the war, the U.S. both participated in arms control talks involving chemical weapons and continued to stockpile them, eventually exceeding 30,000 tons of material. 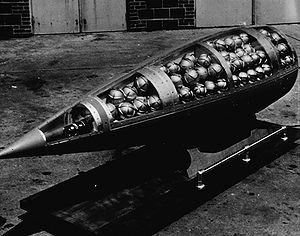 After the war, all of the former Allies pursued further research on the three new nerve agents developed by the Nazis — tabun, sarin, and soman. Over the following decades, thousands of American military volunteers were exposed to warfare agents during Cold War testing programs, as well as in accidents. (In 1968, one such accident killed approximately 6,400 sheep when an agent drifted out of Dugway Proving Ground during a test.[20]) The U.S. also investigated a wide range of possible nonlethal, psychobehavioral chemical incapacitating agents including psychedelic indoles such as LSD and marijuana derivatives, as well as several glycolate anticholinergics. One of the anticholinergic compounds, 3-quinuclidinyl benzilate, was assigned the NATO code BZ and was weaponized at the beginning of the 1960s for possible battlefield use. Alleged use of chemical agents by the U.S. in the Korean (1950–53) and Vietnam (1955–1975) conflicts has never been substantiated.[21][22][23]

The U.S. entered the Geneva Protocol in 1975 (the same time it ratified the Biological Weapons Convention). This was the first operative international treaty on chemical weapons to which the U.S. was party. Stockpile reductions began in the 1980s, with the removal of some outdated munitions and destruction of the entire stock of BZ beginning in 1988. In 1990, destruction of chemical agents stored on Johnston Atoll in the Pacific began, seven years before the Chemical Weapons Convention (CWC) came into effect. In 1986, President Ronald Reagan began removal of the U.S. stockpile of chemical weapons from Germany[26] (see Operation Steel Box). In 1991, President George H.W. Bush unilaterally committed the U.S. to destroying all chemical weapons and renounced the right to chemical weapon retaliation.

In 1993, the U.S. signed the CWC, which required the destruction of all chemical weapon agents, dispersal systems, chemical weapons production facilities by 2012. Both Russia and U.S. missed the CWC's extended deadline of April 2012 to destroy all of their chemical weapons.[27] The United States destroyed 89.75% of the original stockpile of nearly 31,100 metric tons (30,609 long tons) of nerve and mustard agents under the terms of the treaty.[28] Chemical weapons destruction resumed in 2015 with expected completion by 2023.[29]